An amazing family vacation in Aruba where we heard Natalee Holloway conspiracy theories, experienced lots of adventures, a day on a catamaran, and a few bad hair days.

After landing in Aruba, humidity clung to my skin. A steady breeze provided by the prevailing trade winds kept me cool. Most people would recoil from the sultry heat. I welcomed the moisture which evaporates on our skin back in Colorado.

I sauntered through the open-air lobby of the hotel to check out the grounds. The vibrant colors of the coconut palms, flowering bushes, azure blue ocean water contrasted with the bleached white coral sandy beach. When I noticed the pool had a “swim-up” bar, I knew it would be a great vacation. 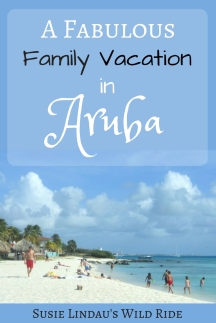 Since our room hadn’t been cleaned, the hotel offered a complimentary lunch on their lush outdoor patio. My family and I sat down under a canopy of thatched palms. We weren’t alone. Several iguanas sunned themselves on the tiled floor. One large one captured our attention with its prehistoric scales, talons and spiky hairdo. He wasn’t the only one in the room with an interesting headdress. My husband said he watched my hair grow by the minute as I sipped my Balashi beer. He used his hands and said, “It has gotten bigger and bigger and bigger!”

I went to the ladies room to check out the mirror. Every hair on my head seemed to dance. Each fine strand found a new way to curl, not in a movie star wavy way, but in a frizzy, “for God’s sakes put a hat on” way.

As my hair grew larger, my lines on my face grew smaller. Humidity is always a trade-off. “If only I could encapsulate the island air to refresh my skin later,” I said and sighed.

The colors of the island continued to hit me like a blind person seeing for the first time. Our first sunset was Maxfield Parrish-esque. I snapped away, desperate to capture it. I gasped when I saw the time was only 7:10! Back in Boulder, the sun sets at 8:30 this time of year. Bummer! We went to dinner after dark every night. 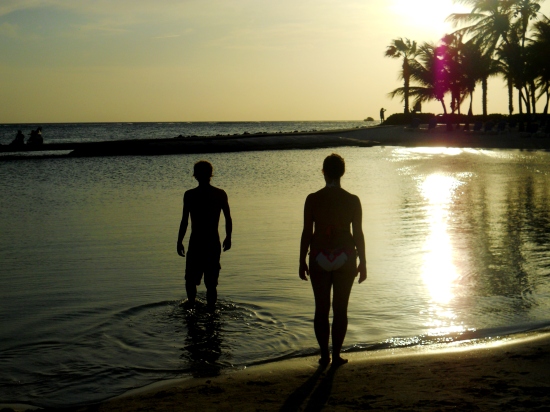 We quickly learned that the native people as well as the Dutch who govern it, are some of the friendliest people. A pretty blonde waitress from Holland cleared up a mystery for me. Dutch, Holland, and the Netherlands are all the same. “Is this your first trip to Aruba?” she asked with a lilting voice. We nodded in unison. She pulled out a map and circled all the points of interest. The island is only 10 miles long, but we rented a car to go out and explore.

A funny observation and the lack of history.

Most tourists who shared the elevator wouldn’t make eye contact, but they always turned to us and said, “Goodbye!” with broad smiles on their faces upon exiting. Ha!

When the Spanish discovered Aruba, they felt it was the most worthless island in the area, so none of its history was preserved. They actually named it, “Useless Island.” Now Aruba is touted as having the highest hotel occupancy rate in the Caribbean.

Fabulous beaches on the western coastline.

Once we reached the eastern coast, it became obvious why we had been told, “Surfing here is suicidal!” The island is surrounded by rock and coral reefs. The leeward side is too calm and the windy side had tremendous waves, but tremendous rocks as well. I could see my son gaze longingly at the enormous swells, but we only found a few reckless boogie boarders. 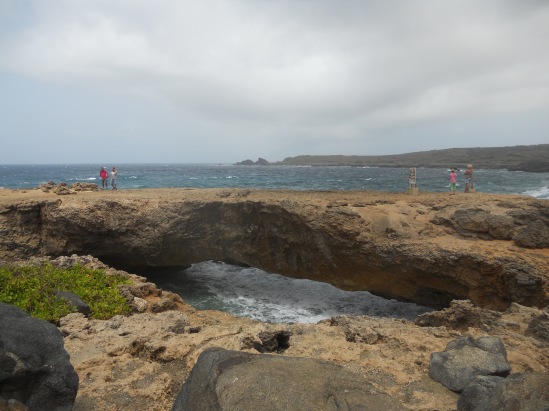 An ancient castle ruin looked out over the eastern sea. When we asked about its history, no one knew anything about it. “Seriously?” This cracked us up since it was one of the most extraordinary landmarks in Aruba. After arriving home, my research uncovered historian speculation that pirates built the castle. How cool is that? 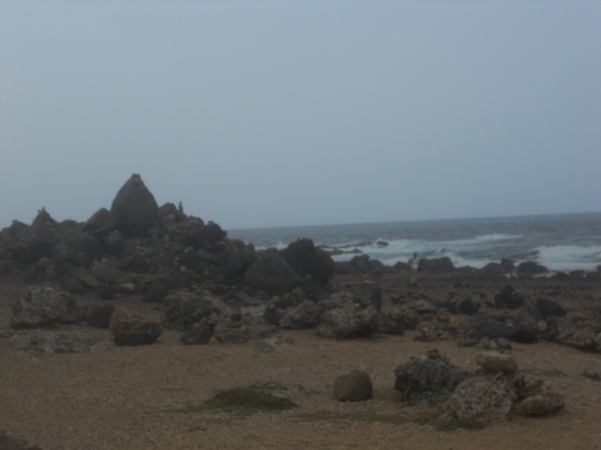 Industry on the island

It has one of the most advanced desalination plants, an oil refinery, its own brewery, (Balashi Beer), and a pretty substantial aloe export business. The population of the island has grown because of the constant increase in job opportunities. It is home to eighty different nationalities and four languages. Lucky for us everyone spoke English.

On a sunny hillside near the beach, we discovered hundreds of marked graves for beloved pets. 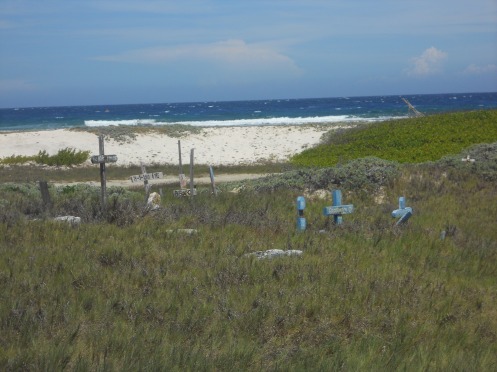 I didn’t see one homeless or begging person during our entire stay. Security patrolled constantly. I wondered if it was a result of the Natalee Holloway case or if they had always been vigilant. Either way, we felt extremely safe the entire visit.

We did ask a waiter native to the country, what it was like when Natalee went missing in 2005.  He said, “It was crazy here!” He told us a conspiracy theory we had never heard before. He believed her mother, Beth, arrived on the island too quickly and must have known something beforehand. The prime minister gave everyone three days off with pay to search for Natalee. They found evidence, but it disappeared when the FBI arrived and took over the case. What???  Beth went to the spa several times after she arrived and the islanders were appalled at her laissez-faire attitude for someone whose daughter was missing. He believed Beth committed insurance fraud and helped Natalee cover up an incestuous pregnancy. Another What? He felt her body would have washed up on shore on the leeward side or nearby Venezuela on the windy side. He is convinced that she will be found alive someday. I didn’t want to argue, but that really didn’t add up in the light of Joran van der Sloot’s recent confession to another murder and imprisonment. It was an entertaining story and it was probably not the only theory on the island. The bar where she partied that fateful night was located across the small harbor from our hotel and one-half block from Parliament. It sort of creeped me out when I imagined we walked in Natalee’s footsteps.

We enjoyed fabulous restaurants all over the island!

We booked a catamaran where the bar opened at 9:00 AM. Whoa! They served sandwiches as we pulled away from shore and we ate right before snorkeling. To think that I worried as a child about the 30-minute rule. 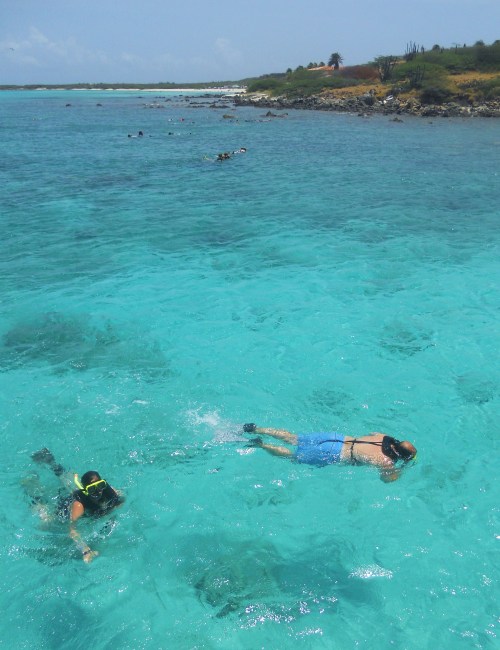 We started with a dive to see a German shipwreck from WWII.

While protecting their island, the Dutch threatened to blow up the German ship. Fearful that the Dutch would learn of their weaponry and latest surveillance techniques, the Germans sunk their own ship and made it to shore without injury.

The rusted hull made a fabulous home for barnacles and other living creatures. Its mast was still intact and poked upwards towards the surface.

From there we sailed to two other locations along the shoreline where multitudes of colorful fish swam without any fear of us. Our hosts served a gourmet meal that makes my mouth water as I think about it again.

The emcee on the boat liked our family and asked my husband, Danny, to help take down the mainsail and then asked our daughter, Courtney, to take down the jib. I took note of his shaved head and wondered if he once had hair like my wild mane. He made us special drinks afterward. Mine was so full of alcohol, I took a few sips before “accidentally” tossing it overboard.

“Will you be coming back next year?” he asked.

“Make sure to bring your daughter with you again. She’s beautiful.”

That freaked me out since he was at least thirty-years-old!

By the end of the trip, I found a great way to deal with my large head of hair.

We really enjoyed the trip and now that I am home, I put away the magnifying mirror. I don’t think I can manage the shock of seeing my wrinkles re-appear. I am happy to say although I am no longer relaxed, my hair is. It is always a trade-off… 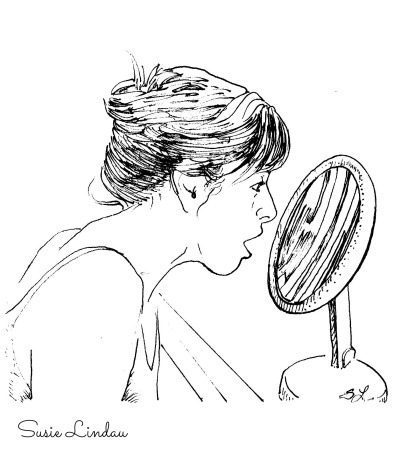 Leepin Lizard! With a little help from his friend…
6th photo by K. Lindau, the rest by S. Lindau
Click for adventure on the Wild Ride!
Click for more travel stories.

14 thoughts on “An Amazing Aruba Vacation and Photos”