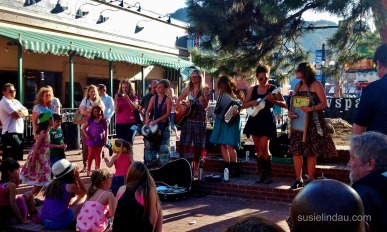 Boulder’s Pearl Street Mall on a Friday night
GQ Magazine recently ranked Boulder as the 40th worst dressed city in America. On face value that sounded pretty bad until I read 40th meant that 39 other cities were worse. As I clicked to the right, the numbers got lower and I realized we were in good company, but I gasped when I clicked on #5) Manhattan. Wait a second. Manhattan? That fine city embodies the heart of American fashion whose pulse we rely on with a beat that strikes a rhythm for the rest of the 49 states and …okay… I will calm myself. Number #4) was Chicago, #3) Pittsburgh, #2) L.A., and the all-time worst-dressed city, drum roll please, #1) Boston. Boston is like America’s Bad-Taste Storm Sewer: all the worst fashion ideas from across the country flow there, stagnate, and putrefy.
What?

Okay, I admit the Republic of Boulder should own its worst-dressed ranking. For years we have been known for our tie-dyed hippies who have recently traded in their Birkenstocks for Keens. Some Boulderites spend a lot of money to look like they just got done hiking a fourteener.  When I first moved out here from Wisconsin almost 25 years ago, (no city was picked from this state –surprised?), I included a dress code on my party invitations since many guests would show up in the same jeans and t-shirt they had picked up dog poo in earlier in the day. During the weekday, I was shocked to see women running around in workout clothes. Back in Madison we changed into nice outfits after working out. Yes, people from Wisconsin work out too. Slowly I got used to this Western casual dress code and now I can be found in a tennis skirt after a match while picking out a cantaloupe at Whole Foods or in yoga pants after working out while running errands on Pearl Street. My theory is that “Casual Friday” was so popular it spread throughout the week and then across the country like wildfire.

I will acknowledge some of Boulder’s fashion short-comings, but must defend some of the statements made in this article written by Nurit Zunger. “Strolling through this charming university town, you are most likely to find three major categories of clothing: 1) anything made by North Face 2) anything made by Patagonia 3) fanny packs.”

Seriously, fanny packs? They went out of style when all the elderly started wearing them to fast-walk unencumbered around the mall.

The next statement is just ridiculous. The observant eye will also spot unmistakable seasonal trends, such as Adidas for Fall, Crocs for Spring, and Uggs for Summer (we have no explanation for this).

Well that’s because it is also a falsehood. Adidas are worn year round. Crocs are not a trend around here unless you are under the age of 10. Even though adult Boulderites own at least one pair of Crocs since they are headquartered here and they practically give them away at warehouse sales, they would never be caught outside their yard wearing them since they are so 5 years ago. Uggs worn in summer, are you kidding me? First of all I thought this was a men’s fashion magazine. Women do not wear them on the summer sandy beaches like the Australian company intended, but in the winter snow. Did Nurit actually come to Boulder to observe us before writing this article?

He continues: These are often accompanied by Boulder’s year-round go-to accessory, the wheatgrass shot (sometimes paired with an unidentifiable vegan “cookie”). Yet of Boulder’s 100,000 people, about 30,000 are students, some 99.9% are blonde, and all of them in better shape than you.

I will agree that we eat well, but I would say the bike helmet is a more common accessory. 99.9% blonde? I think the number must be down in the 80thpercentile somewhere.

He concludes with: This town is always obnoxiously flaunting its “fittest-place-in-the-country” awards, and you will be hard-pressed to find one person here, including your 85-year-old grandmother, without a six-pack. It is, in fact, a worst-dressed city that looks best naked. So Boulderites, do your fellow citizens a favor: next time you reach for the biking-shorts-and-sneakers as eveningwear combo, just take it all off. 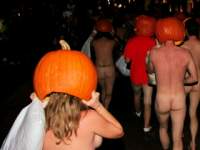 We are too busy working out to flaunt our “fittest” ranking, but I agree with the second statement and have been obliterated by some of those 85-year-old grandmothers in tennis. It is amazing how they can move on the court. One of them flashed her stomach at me when she overheated, but I wish six-pack abs had graced my view. You won’t catch me taking it all off, but Nurit, please feel welcome to come to Boulder for its Naked Pumpkin Run in October!

9 thoughts on “In Defense of Rankings, Yoga Pants, and Just Going Naked”