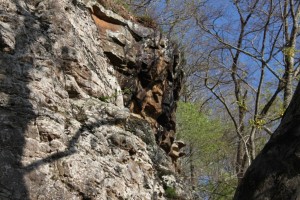 In a response to Madison Woods’ Friday Flash Fiction prompt, I have written two 100 word flash fiction stories inspired by this rock formation. Madison took this photograph and if double clicked, 4 faces can be seen peeking out from the rock. Can you find them?

A Fight for Life

The thin gown clung to her damp skin as a trickle of perspiration dripped between her breasts. She glanced at the rocky cliff wall searching the wizened old faces carved in rock and weathered over the years by wind and rain in hope of gaining enough strength to continue. A violent wave of excruciating pain struck her body leaving her weak and nauseous. She felt as though her insides were ripping apart.

She bore down and pushed her baby boy into the world.

In the photo of the Sepulveda bluffs taped on the wall, the old men seemed to smile.

They had met at this picturesque spot many years ago. The morning light had set her azure blue eyes glinting like waves on the distant shore. With the touch of a simple handshake electricity coursed through his being and their souls entwined.

He looked at the rock formation and his throat closed up as he gazed in wonder at the ancient looking faces that had survived thousands of years. He had prayed for just one more. He opened the jar of ashes and released her into the gentle breeze.

Can you see the faces? What do they seem to be saying to you?