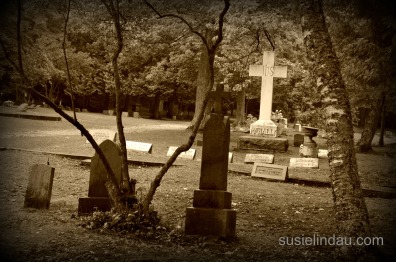 The moon, cloaked in a veil of wispy clouds, cast an unearthly glow on the wooded neighborhood park. A chill crept through Jillian’s thin costume and she picked up the pace. “Hey! Wait up!” Her older brothers had let her tag along on this eerie Halloween night. Encumbered by the long skirt tangling between her legs, she lagged behind. As the dense forest closed in, the path began to glimmer like an oily snake coiled out in front of her. Finally, she emerged from the dense pine forest and found herself alone in the village cemetery.

“I should have known.”

Gravestones appeared like ghosts gliding upward from decomposing bodies. Polished white marble statues of angels and saints with maniacal expressions towered over her waiting to pounce. A black shadow swooped across the path with the beating of huge wings. Jillian’s little heart pounded as she gathered up her skirt and began to sprint. Her lungs burned with the strain of sucking in icy air. She rounded the corner near an ornate crypt and slipped on oak leaves collecting between markers. Tumbling to the ground her head struck the edge of a cracked granite gravestone. Her knees buckled. Everything went black.

Searing pain like a hot poker pierced Jillian’s forehead and an earthy smell filled her nostrils. Opening up her eyes, the surrounding tombstones now looked iridescent. A thick blanket of fog lay all around the graves moving like waves in a tumultuous ocean. An ethereal figure floated towards her and she stepped backward. With a gentle voice it whispered, “Come with me my dear.”

She spun around to feet pounding on the gravel path. Her brothers bent over the granite stone.

“I’m here!” she cried to her brothers.

She rushed up to them and saw herself sprawled out on the frozen ground.

Have you ever been in a cemetery at night?

Have you know anyone who had an out-of-body experience?