The first time I heard Washington Irving’s The Legend of Sleepy Hollow, my sister Patty and I listened to my dad in stunned silence as he told the frightening tale from memory. Poor Ichabod Crane. He seemed like such an odd fellow with his hooked nose and over-blown ego. I remember thinking he was doomed when he fell in love with the beautiful Katrina since he had to compete for her attention with wicked Brom, the town bully. Finally, when Ichabod sauntered back from teaching and found himself alone in the woods, he began to hear the thunder of horse’s hooves. His worst fear was realized when he discerned that the dreadful man riding the horse was headless with only a glowing-eyed jack-o-lantern straddling his shoulders. As the rider’s steed reared up, he lifted his hollow glowing head and hoisted it at the terrified Mr. Crane. My dad would cock his arm back and say “Buwahahaha!” as he threw the imaginary pumpkin. “Ichabod’s hat was found alongside a shattered pumpkin and he was never seen again.”  Left with the ultimate cliffhanger, my sister and I lay awake in horror, afraid the headless horseman would ride through our bedroom door.

Years later, my husband Danny would give me a break by taking the children upstairs to read to them before bed. Little did I know that he was regaling them with the same haunted tale. A few hours later I would hear the cries of one or both children up with a nightmare. I couldn’t imagine what caused these night terrors.

One night I caught Danny and the kids in a bedroom with the lights out. All three used flashlights under their chins to add drama to their vivid imaginations. I could hear him say in a low whispery tone, “Ichabod was walking home from school in the dark forest, wary of what may lurk behind the next oak tree. The townspeople had warned him about the Headless Horseman.” I could almost hear my children’s hearts pounding from where I stood in the hallway. I stormed into the room and flipped on the light switch “No wonder the kids are waking up in the middle of the night!” I shouted. That was the end of Danny’s embellished stories about the Headless Horseman or so I thought.

It wasn’t until a camping trip the next summer that Ichabod’s tormentor road again. My son Kelly remembers Danny telling The Legend around the campfire. “Later in the tent, Courtney and I each had lanterns that cast shadows on the canvas with silhouettes of spiders and bats,” Kelly said with a smile, “I remember being pretty creeped out.”

As our children grew up, the narrative evolved. Whenever our family gathered with friends around a campfire, Danny would begin with, “It’s time for an Ichabod story!” The kids would smile knowing what would follow. He began with a random anecdote where Ichabod was the protagonist and would include something we had seen on a hike earlier that day such as, “One day Ichabod was walking through the forest on his way back from teaching when he came upon an old miner’s log cabin.” Just when something dreadful was about to happen, he would turn to the person to the right of him and end his chapter with the word “and…”  The next narrator would continue the thread until it went around the circle. It usually ended with someone talking really softly and then surprising everyone with a loud dramatic flourish. 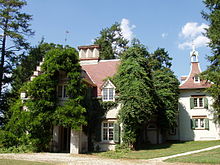 Flash forward to a New York vacation where the whole family planned to drive Courtney to a ballet camp in Saratoga Springs. After visiting friends and family in Croton-on-Hudson, we realized how close we were to the Sleepy Hollow Cemetery and Washington Irving’s home in Tarrytown, NY. With true Lindau enthusiasm, we checked out his haunts and soon found out how he could have been inspired by wandering around the gloomy headstones, monuments, and crypts.

Some have said that Irving’s tale broke the convention of the typical Gothic Horror, by including a fairytale landscape of flowers and singing birds along with its dark imagery. As we drove up the winding road to his home aptly named Sunnyside, I could see why. An ancient wisteria tree arched over much of the entrance and the interior had an enchanted appearance. I expected bluebirds to fly in and out the windows and Snow White to appear in the doorway. During the tour, we learned that he had also written  Rip Van Winkle and included it in the same compilation.

For someone whose short story brought chills to generations, he lived a very pleasant life. He almost became a painter, received his law degree, and was minister to Spain. Edgar Allen Poe asked him for advice while writing William Wilson and The Fall of the House of Usher. Irving had eight children (who survived to adulthood) and lived to the ripe old age of 76, dying of a heart attack in 1859. 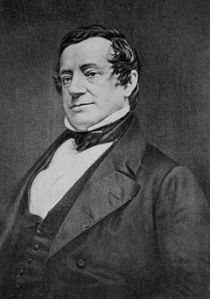 I can only imagine the stories he told his own children and grandchildren before bed!

Did this story frighten you as a child?

Have you read a book as an adult that kept you awake?

17 thoughts on “Until He Rides Again!”