When I heard that Winter X Games would be held in Aspen, Colorado I thought, I missed the Dew Tour this year in Breckenridge. I could still get a second chance at redeeming myself. I cringed at the memory of the last one I had attended.

A year ago, my husband Danny and I had finished lunch and decided to ski over to the halfpipe to check out the competition. The women had finished their semi-final round so we continued to the base of Peak 8 to see what kind of “swag” (free stuff), Dew Tour was handing out. Tents were set up by various companies giving out samples of energy bars and power drinks. Some had contests to win snowboards. I ducked into one where a couple of pro snowboarders sat behind a long table autographing posters. I couldn’t believe it. One of them with a pen in hand was Louie Vito.

“I voted for you when you were on Dancing with the Stars!” I said.

“I was bummed when you didn’t make it to the finals, but you had amazing fan support.”

“I was surprised I lasted so long,” he said, flashing me his gazillion-watt smile.

He signed a poster for each of my kids who are about his age. “Thank you so much!”

When I came out of the tent I beamed at Danny. “Louie Vito is signing posters!”

“What’s that brown stuff all over your teeth?” he asked.

“What do you mean?” My heart sank.

“You look like a tobacco chewer,” said Danny, smiling.

“WHAT?” My heart plummeted to my lower gut. “I bet it’s the beef stew I ate. Oh crap!” While scrubbing my teeth off with my ski mitten, I thought back. I’d raced outside after eating, slapped on my skis and did the Happy Skier smile all the way down the mountain. I had been talking to Louie Vito with gravy all over my otherwise pearly whites. Gross!

One year later, I mentioned the Winter X games to my husband Danny. Our kids had been invited to the event and would be staying with friends in Basalt. He made a reservation at a condominium in downtown Aspen. I joked about restoring my reputation with Louie Vito. The chance of meeting him at an event attended by over 100,000 people was slim to none, but I looked forward to skiing at a couple of the mountains resorts and checking out the Ski Big Air and Snowboard SuperPipe competitions.

We stopped in Breckenridge Thursday night and woke up to a snowstorm Friday morning. Joining other snowboarders and skiers, we “yahooed” while making fresh tracks in champagne powder up to our knees. I was thankful that it was Friday and not the weekend. The crowds would  “pack it out” the next day. Our adventure hadn’t even started yet.

We returned to the car by 1:00 PM and continued our journey to Aspen. After settling into our condo just a block from the gondola, we made plans to hit the Winter X Games the next night.

Saturday we skied Aspen Mountain and met lots of wonderful people on the gondola and chairlifts. I was impressed by its challenging runs and breathtaking views.

As the shadows grew longer, I looked forward to the main event. After dropping off our skis back at the condo, we hiked a few blocks to the bus stop that would take us to Buttermilk and the X Games. We met hundreds of others waiting for a ride. As cold as it was, the rowdy crowd seemed unaffected. On the crowded bus, many sang songs and cracked jokes while others chatted it up.

Thousands were in attendance Saturday night. This gigantic event made Dew Tour look like a backyard barbecue. A temporary town had been created by trailers, tents, and scaffolding. We joined the throngs of young people at the bottom of the halfpipe and watched the Ski Big Air competition. Being adjacent to it, we could view the skiers in the air. I kept thinking, “How did they get the nerve to do that jump the first time. Whoa!” Breckenridge resident Bobby Brown took gold! 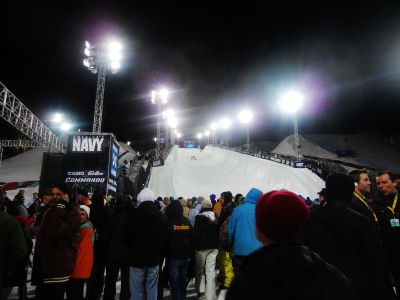 We moved over to the next venue and ran into our children and my daughter’s boyfriend. Even in ski clothes the cold air finally got to us. After waiting in a 30 minute line, we took a more subdued bus ride back to Aspen. 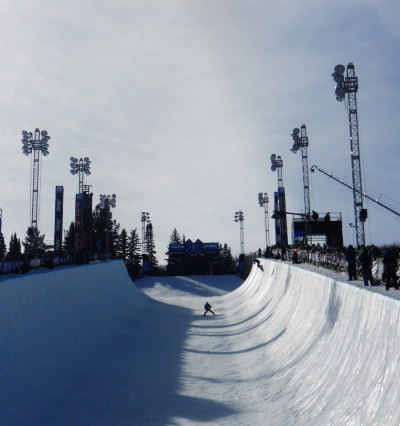 The next morning we skied Aspen Highlands and then caught a bus to the Games. The venue was slammed with spectators waiting to see snowboarders like Danny Davis, Shaun White, and of course, Louie Vito compete to qualify in the SuperPipe finals which would be held later Sunday night.

They closed the entrance to the base of the pipe just as we were running up, so we took photos and videos from the sideline. I shot one of Louie as he sped by on the back of a snowmobile that would take him back up to the top for another run. I flashed a white toothy grin even though he never looked over. I figured that would be as close as I would get.

I didn’t bother taking one of Shaun White since he channeled Michael Jackson by wearing a full black ski mask and it was almost 40 degrees…sheesh!

Then I noticed spectators walking over the catwalk to the base of the halfpipe.

“Come on Danny. Let’s go!” We dashed to the entrance. I couldn’t believe how lucky we were. With Danny pointing the way, I slid up close to the front of the crowd and got some great videos and photos.

When they announced that Louie was up next, the crowd went wild. The enormous TV monitor had shown an interview with Louie and his new trainer, John Schaeffer, who also worked with Apolo Ohno. He said that Louie started his training by working out in a 6-week boot camp. When he finished he had dropped ten pounds, had gained a lot of muscle and was down to 4% body fat. Much to the young crowd’s dismay, Louie said he stopped drinking alcohol and had quit the party scene.

He had a qualifying run and cheers went up once again.

And then I saw my chance!

Being incredibly gracious, Louie greeted the crowd and signed autographs. Many fans had pictures taken with him.

The girl right ahead of me leaned over the gate while the guy beside me snapped a photo. Louie looked right at me. I asked, “Would you mind if we had our picture taken together too?”

As I leaned in, I said, “This is going to be in my bloooooooogg,” just as the photo was taken.

I ran back to Danny. “Can you believe it?” I couldn’t wait to see the picture and then I wanted to cry. “Oh no! I am hideous. I was talking when the picture was taken and it’s all distorted!”

“Well at least Louie knows I don’t have brown teeth.”

In case you haven’t been on planet Earth the last day or two, Shaun White won the Snowboard SuperPipe with a perfect 100! That guy sure knows how to get air.

Click here for the complete results of the Men’s SuperPipe

All photographs and videos by Susie Lindau

Have you ever wanted a do-over?
Click for more Wild Adventures!
Related Posts:
What Doesn’t Kill You… Helicopter Skiing in Canada
A “Tail” of a Whale Adventure in Three Acts
What Mila Kunis and Ashton Kutcher taught me last Friday