In the shelter of a Quonset hut in Kootenay, British Columbia, our guide John instructed my husband Danny, myself and 8 others on the fundamentals of helicopter skiing and how to stay alive over the next three days. I had won the trip with CMH for two. “This is an avalanche beacon. Slip it over your head, snap the belt around your waist and turn it on.” We would each wear a backpack that held a probe and shovel and would take a turn following the group with a satellite radio. “I hope to God we don’t need any of this equipment,” I thought. The guides had already given us our humongous skis.

While I sat there shivering, my new ski boots pinched at the calf and my toes tingled from lack of circulation. “They felt like slippers when I tried them on in the shop last Monday!” I had broken rule #1. Never buy new ski equipment without trying it out before a trip – and this was no ordinary trip. I reached down and unbuckled them. As the conversation swirled around that frigid metal shelter, I began to sweat.

Double black diamond (expert terrain) does not faze me and I can get down any mountain, although it’s not always pretty, but I had never been a tree skier. Danny assured me I was up to the challenge. “If it’s anything like my other trips, it’ll be wide open bowl skiing.” In other words – no trees. Now that I had arrived, I wasn’t so sure.

“I am about to hit 2,000,000 vertical feet,” Peter boasted. He was a professor from Hawaii, but looked like a surfer. Some responded with similar totals.

“I just want to get my money’s worth,” said Marie who had traveled from Quebec, “$7,000 was a pretty big setback.”

Danny and I exchanged glances and I hoped he would keep quiet about my good fortune.

I remembered seeing a young lady with a full leg cast at the lodge the night before and wondered if this “similar terrain” would end up breaking one of mine.

“All those hours of working out had better pay off,” said Chuck. I had chased after tennis balls on a court all winter and had skied on weekends, but had that been enough preparation?

Soon the distinctive sound of helicopter blades could be heard overhead. We hustled outside. The sound was deafening as it landed.

“Go, go, go!” shouted our guide. We kept our heads bowed and then pulled ourselves up into the helicopter.

I found myself in the middle of the bench seat. Danny sat next to me at the window. There were four of us across and we faced four others. There was a jump seat on the side that held the other two skiers and our guide sat in front with the pilot.

“Susie! Put away your camera and hurry up!”

I could barely move and my heart rate soared with the helicopter. After unzipping the collar of my jacket, I closed my eyes and took a deep breath. I went to my happy place. It’s a big white room where I can see and hear the ocean outside a large picture window. My heart rate decreased to 220 beats per minute. I gazed out the side window at snow covered mountain peaks as far as I could see.

After touching down, we climbed out onto a white snowy summit. We hunched over as we took a few strides and then threw ourselves down, covering our faces.  The thrust of the air from the propellers turned the snow into millions of mini projectiles that struck the backs our hunched bodies. We had been warned not to sit up when the helicopter took off since the force of the wind could blow us over or off the mountain top. I peeked over at Kirk who sat upright. He was an older man and it was probably hard for him to get into that pod-like position. He was thrown face first as the helicopter took off to shuttle another group.

I trudged through the knee-deep heavy snow to the pile of skis unloaded by the guide. I searched for the ones with Susie taped on them, but Peter pounced first, unstrapping my skis and poles with what seemed like superhuman speed.

As I clipped into my bindings John said, “Follow my traverse along the top of the ridge to avoid an avalanche, but once we start skiing the bowl, try to stay close as possible to the other’s skier’s tracks. Then follow my path when we ski into the trees.” 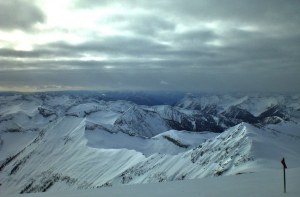 While I tried to keep up with the skier ahead of me, I felt out of control of my mammoth beast-like skis which chattered like my own teeth. I regretted buying the now unbearable new boots. My thighs burned as I tried to make the turns in the deep heavy snow. This was nothing like the dry light champagne powder of Colorado.

I was the ninth skier on the traverse and the packed trail increased my speed as we entered the woods. Each tree seemed to leap out at me as I raced by. I began saying Hail Marys out loud as I turned through the dense pine forest. I was so out of my element. I fought back tears and then a clearing appeared ahead.

Somehow I had made it down to the bottom of the mountain without smacking into a tree. I joined the rest of my group as my legs shook in exhaustion.

“Was that great or what!” Peter the surfer professor said.

I glanced at my watch and it was only 9:30. “Crap! How would I survive this day and next two?” I asked myself.

“How long will we be skiing today?” I asked John.

“Will we be going back to town for lunch?”

“Nope. We’ll meet some of the other groups at noon and will be served lunch outside.”

“What happens if someone bails and just doesn’t want to ski anymore?’ I asked.

The others laughed and the guide responded, “Once you’re here, you’re here for the day, unless someone experiences a life-threatening injury.”

Danny walked up, put his arm around me and asked, “Are you okay? You were great in the trees. I was right behind you.”

Oooooooh! Do you feel the burn?

“I’ll be okay,” I replied with a lump in my throat. I looked up at the helicopter coming to take us to the next mountain top.

Later, I discovered the high performance tabs velcroed inside the back of my boots and pulled them out. I still couldn’t figure out what was wrong with the top buckles. I just kept them open for the duration of the trip.

During those three days, I jumped off a 12 foot cornice and almost slid off a 50 foot cliff. I had to side-step up a mountain face to get off that ledge created by a fallen tree limb as the snow began to slough off underneath. I also skied in some of the most beautiful terrain in the world. I got the hang of those enormous skis and began plowing through the trees.

Our days always ended with a dip in the hot springs. Then back at our hotel, we devoured a 7 course gourmet dinner. The wine and conversation flowed with new friends from all over the world.

Back in Colorado, there have been many times when I’ve ducked into the trees to make fresh tracks on a powder day. “You’re crazy!” Danny has said and then smiled.

Last year, I found the hidden adjustment under the top buckles of my boots through the help of a friend who worked fitting skis and boots in Aspen. It made such an amazing difference!

Have you ever felt unprepared for an adventure or new experience?

Do you feel that getting out of your comfort zone helps you to grow as a person?