I picked Trinity from The Matrix to go to battle for me in Clay Morgan’s March Movie Madness because she had it all: explosive strength, courage, intelligence, speed, beauty, and she rode a motorcycle like it was an extension of her own amazing body. She had those killer leather outfits, super cool shades and made the ultimate sacrifice to save Neo. Put in my son Kelly’s words, “Trinity was a badass!”

Kelly has taken a few film classes while in college and informed me of a Youtube video about the philosophy behind The Matrix. In his opinion, “Trinity was one of the few female movie characters to defy general stereotypes about women.” How awesome is that!

Did I glean that subconscious notion while watching the movie? All I know is that after leaving the theater, I was pumped. Trinity in The Matrix (played by Carrie-Anne Moss), motivated me to work out and weight train on a regular basis (which lasted about a week), while something about her struck my core. She made me think. Her ability to stay calm and confident through every intense situation seemed super-human.  She inspired me to dig deep and realize there was something much more to my own character. 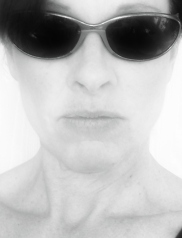 Am I badass enough for you?

Years later, I still find her relevant and in some ways, even more of an inspiration. Since I began writing a short while ago, I’ve had to take an enormous leap into the great abyss we all know as the blogosphere. I visibly shook as I pressed publish for the first time and still get a “thrill.”

While baking cookies for bribes to get votes in the March Movie Madness, I watched the premier of Missing. Ashley Judd plays an ex-CIA agent, Becca Winstone, whose son is kidnapped while attending college in Italy. Twelve minutes into the show, she morphed from a typical mom into trained assassin. She took down a would-be killer by using martial arts, showing off skills that would rival any of the James Bonds.  The difference is she shows her gut-wrenching female side when crying over the videotape of the abduction and doesn’t bed the first guy that she sees, although he does give her a bath.

I love these role models for women! They are nothing like Bella in Twilight who depended on vampire Edward or werewolf-boy Jacob to rescue her. Each showed both inner as well as outer strength and would do anything to save the person they loved.  My only criticism is that they seem to be a bit serious and I doubt they would understand my sense of humor.

In my opinion, I had one of the tougher draws and lost to Snape (Harry Potter), in the first round. Would I pick Trinity now that I understand how the game is played? Absodanglutely!  Heck, Mary Poppins made it through the first challenge.

Next year I will be ready to rumble. By that time, Becca Winstone will be a household name and should breeze through “the Madness.” In the meantime, I plan to learn to ride a motorcycle and take a self-defense class. Seriously!

Which movie character would you choose?

To watch the ABC episode of Missing click here

50 thoughts on “Compassion to Concussions”