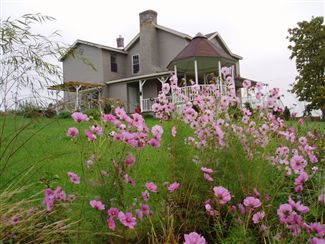 “Now, let me see. Wash the windows.” Minnie’s list-making was interrupted by a low rumble. “Is it the end of days? On April 20th?” She shuffled over to the window in her pink fluffy slippers and peered out at the dust storm rising up over the hill.

“Oh my, oh my!” With her hair in curlers and still dressed in a housecoat, she grabbed her shotgun.

She hiked over the hill and gawked at the vehicles driving into the south pasture. Music blared from car stereos and there was a distinctive odor.  She spun around, stormed back to the farmhouse, and called the sheriff.

After a long day of shooing away trespassers, Minnie finally sat down on her front porch and began to rock. She pulled a metal case out of her pocket, made herself a cigarette, and lit it up. “For medicinal purposes only. Dang glaucoma,” she said and then inhaled.

Have you ever had unexpected or unwelcome guests?