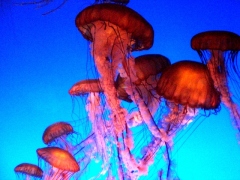 As spring slides into summer, my thoughts turn to jellyfish; don’t yours? I find these undulating sea creatures so fascinating with long tendrils trailing behind their gelatinous bodies. They are the ballerinas of the deep while dancing through the ocean current.  Skeletonless, they are original shapeshifters. When confronting an enemy, the dance transforms into a rager as if a DJ has dropped a track. 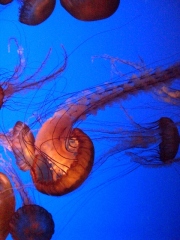 Jellyfish reproduce sexually and asexually which must be very convenient. 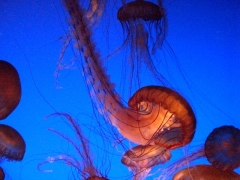 Appearances can be deceiving. Although they seem defenseless, some sting like a bee leaving an unsuspecting surfer cussing out in vain. “Dude! That is like so uncool!” Some beaches keep bottles of vinegar on hand to neutralize the barbs or nematocysts. You see, vinegar has all kinds of uses. If you don’t have any vinegar on hand, have a friend urinate on you.

The box jellyfish is so venomous that any contact with their tentacles can be fatal. Each tentacle can wrap around the soft skin of a swimmer and can have up to 500,000 barbs that shoot venom like a harpoon. If you do come in contact with a box jellyfish, call 911 and get the anti-venom immediately. It is the most fatal creature on earth and the only one with 24 eyes and a 360 degree view.

Now I know why some swimming areas use net enclosures. I thought they kept the swimmers in, but they keep the stinging jellyfish out. That is a very good thing!

Jellyfish are neither jelly nor fish. 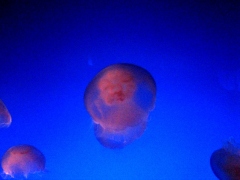 Jellyfish go with the flow literally as well as figuratively. They are the original surfers, hitching rides on currents that can take them 100’s of miles down the coastline. They can propel themselves by opening and shutting their umbrella-like body. Some may go too far and find themselves rushing out into the depths. “Dang! I meant to get off in Baja.”

Some jellyfish may be seduced by warmer waters and find themselves sucked into tidal pools. When the tide goes out their 95% water-filled body dries in the sun. Soon they resemble a silicone breast implant discarded on the beach. 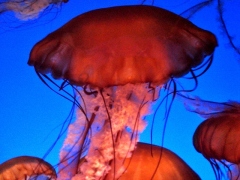 They have an alien appearance much like a flying saucer space ship or the 1976 Boston album cover. Maybe they are aliens! If that is true, then Martians must have come here bazillions of years ago since scientists think they were Earth’s first sea creatures. 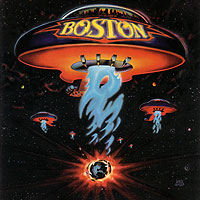 The largest species is the lion’s mane jellyfish growing to an amazing 120 feet. You could get lost in its tentacles and would need gallons of vinegar! The smallest is speck-sized at .5 mm. 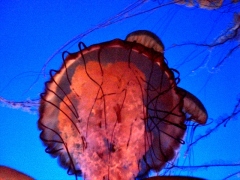 Jellyfish are carnivores, ingesting and “voiding” through the same hole. TMI!

They do have natural predators such as sharks, tuna, seagulls and man. In Japan, jellyfish is a delicacy. They export it dried, to many other countries. I wonder if I could pick up a can from Whole Foods.

Sometimes jellies (as I fondly call them), congregate in huge blooms or a smack. You want to avoid them at all costs or you will be smacked as they try to snack.

I love jellyfish and could gaze at them for hours from a safe distance in an aquarium. They seem to have an unearthly glow with light that radiates from within. They illuminate the space around them like an oceanic lava lamp. Turn on my video, tune in, and drop into the jellyfish counterculture!

My video from the Monterey Bay Aquarium

All jellyfish photos  and video by Susie Lindau

What is your favorite sea creature?

107 thoughts on “My Gelatinous Friends”