You never know what you might see in your own backyard, especially if you live in Colorado. While growing up in Wisconsin, I never once set eyes on a hot air balloon. The abundance of trees and lakes make cloud hopping too risky. My only experience with them was in the movie, The Wizard of Oz.

They are a common sight in the wide open vistas of Boulder. This photo was taken as a balloon sailed over our yard on Saturday. 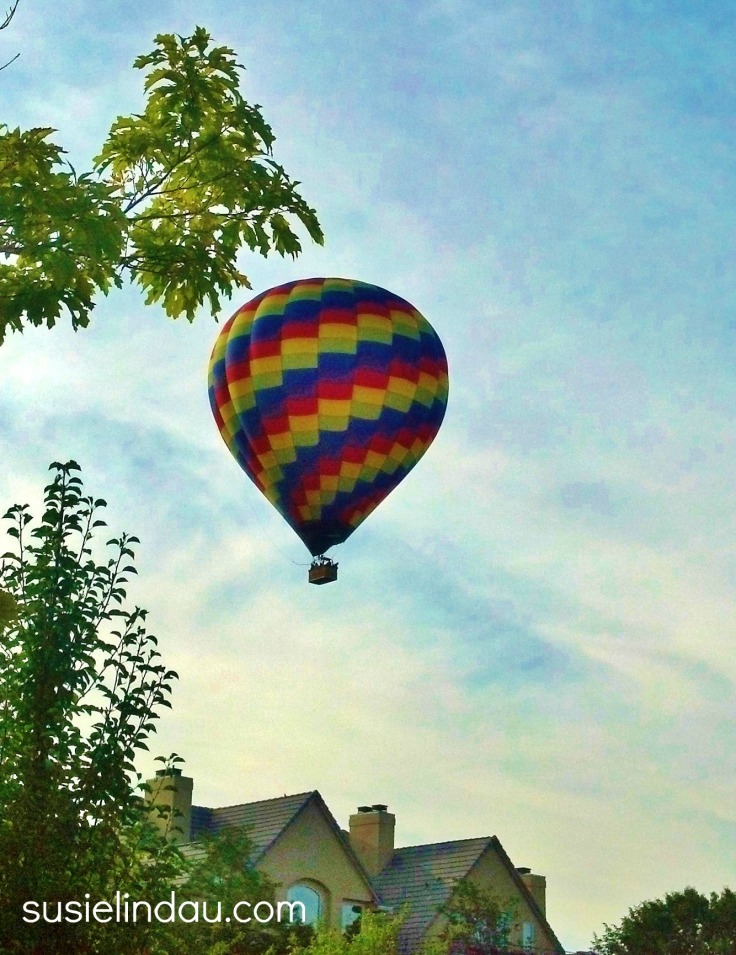 I always imagined I would float up to the sky if I held enough helium-filled balloons. Did you?

Many thought the same thing in 2009 when the Heene’s of Fort Collins claimed their balloon craft flew into the sky with their son stowed away inside. After they revealed that it was a publicity stunt, they allowed him to come out of his hiding place – the attic of their home. It became known as the Balloon Boy Hoax.

Hey. I wasn’t the only one fooled by the Heene’s. Do you see the caption under this photo?

When I read that a pair of adventurers attempted to fly from Oregon to Montana while seated in lawn chairs suspended by helium balloons, I thought, “I won’t be fooled twice.” Then I learned that each balloon was 5 feet in diameter! Unfortunately, within two hours of the flight, the men landed hard when they were hit with a hailstorm. The balloons soared back up into the sky. They had hoped to fly across Iraq later this year.

Instead of hot air to control the upward and downward motion, they had been using a BB gun to shoot enough balloons to lower them to the ground!

Hot air ballooning takes place in the early morning when the air is cool. It rises into the sky when air is heated and captured in its “envelope.” Fire restrictions (now lifted –pun intended), in Boulder prevented the use of hot air balloons since they use an open flame.  That is what makes the distinctive sound.

When I first moved here, I looked all around trying to figure out where that peculiar breathing noise was coming from. It took me a while before I looked up!

I captured the sound when videoing a couple of hot air balloons in my backyard this weekend. The balloon is much closer than it looks. It occurred to me after they shouted hello from their wicker basket perch, that I may end up in their YouTube video. I better not run out scantily clad in my pajamas next time!

Would you like to take a hot air balloon ride?

I took my photos and video with a Droid Phone