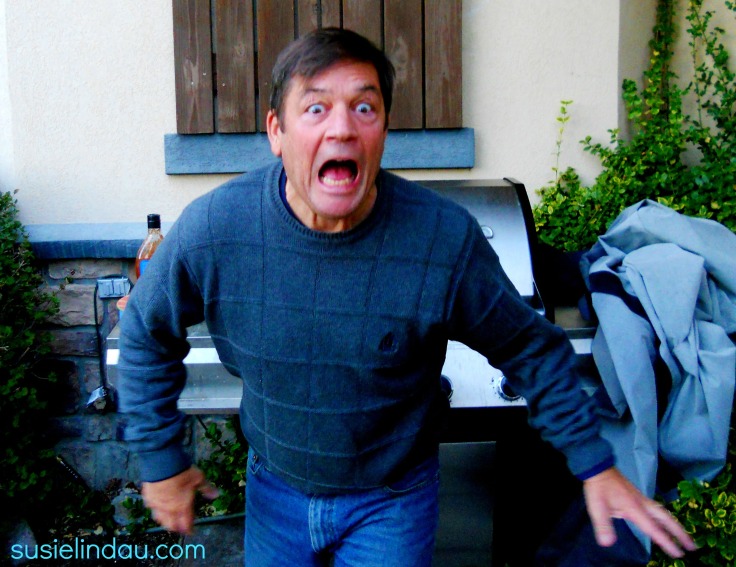 Did I scare you Danny?

I learned about The Wilhelm Scream through Lame Adventures blog. Apparently a dude named Wilhelm screamed in a film back in the day and it became pretty darn famous. It has been reused in many other movies by foleys who drop in the sound effects.

I wondered if there was a famous gasp. The Lame Adventurer said she wasn’t familiar with the gasp.

“Gasp!” How could she not be familiar with the gasp! I don’t think I have gone through a day without gasping.

Gasp: a sudden intake of air expressing fright and freaking out everyone else around the aforementioned gasper. Often the gasp is followed by the clutching of one’s chest since a heart attack feels imminent.

My kids hate it. I’d say, “Gasp! I forgot to tell you that I ran into your friend today.”

After peeling them off the ceiling, they’d say, “Stop doing that!” I can’t help myself. It’s in my blood.

My first experience with the gasp was through my mother. She is infamous in our family for them. My clearest memory of her frightening auditory expression, happened whenever she thought another driver was about to crash into our tank of a station wagon driven by my father. This happened every time we drove somewhere. It went something like this:

“Gasp! (sudden intake of most of the air inside our vehicle), Eddie! Eddie! EDDIE! LOOK OUT!”

Followed by another, “Gasp!… Oh…. never mind.” Everyone recuperated for the next 30 minutes after our short lives flashed before our eyes.

It also commonly occurs when someone sneaks up and scares the Hell out of a person. My husband Danny startles me on a daily basis. Following my gasp, he always responds, “I tried to make some noise, but you must not have heard me over the blow dryer/TV/garbage disposal.” I will shake for the next half hour after jumping out of my skin.

The worst is when I am rewriting my thriller. I get immersed in the scene. While visualizing the terror of being alone in the dark as cold fingers grip her…

Here is my own dramatization of the gasp. Can you relate?

I have to admit to being a purist. It has to be an intake of air otherwise it is a scream. This funny video of The Annie Gasp from the television show, Community includes a few screams.

The film trailer of Silent Hill: Revelation is full of gasps. Unlike my mom and me, these are justifiable exclamations.

Over the years, I have perfected the gasp. Not only do I use it when I am startled or backseat driving, but also when I am excited, remembering something, watching a sporting event, learn any sort of news or come up with a new idea.

Hey! I wonder if any of those Hollywood foleys are looking for an experienced gasper. They could call it The Lindau Gasp.

“Gasp!” That would be so cool!