Like most children, ours asked how we met. Over the years, the story came out in bits and pieces. There was a reason for that.

It all started years ago, back in Wisconsin, I had my wisdom teeth pulled. While high on Tylenol 3’s, I watched the Oprah Winfrey Show for the first time. She interviewed several contestants competing to take over the job of Dear Abby; an advice columnist.

Every time someone asked a question, they came up with varying answers, until a young woman phoned in. She asked what she should do with a boyfriend who wouldn’t commit to marriage after 2 years of dating. Every panelist said, “Give him the ultimatum,” and then they cut to a commercial.

While higher than a kite, I had a Eureka moment! When my boyfriend of nearly three years stopped over an hour later, I gave him the ultimatum! Of course I gave no thought to this momentous occasion, my chipmunk appearance, or my dragon breath that could have dropped mere mortals to their knees.

Needless to say it did not go well. A month later, I told him to make up his mind, so I could enjoy my summer which was always short in the land of cheese.

To get my mind off the inevitable, I called my mom. “Let’s go to a Brewer game this Saturday!”

“I just had bridge club with Marilyn Lindau,” Mom said, “Danny is coming into town from Colorado for Memorial Day weekend. Maybe they’d like to join us.” The Lindaus were family friends and my sister Patty and I knew Danny’s brothers, Jamie and Mark.

I flashed back to the first time I met Danny. I was entering high school as he was entering college. Our families went on a camping trip in Door County. Danny drove up in a Volkswagen convertible and then played soccer with his brothers. I remember saying to Patty, “I didn’t know the Lindau boys had an older brother!” He only remembers my sister because of her cute freckles.

My sister and I gathered our friends and met the Lindaus at my parent’s house. We caravanned in a couple of carloads to the baseball game in Milwaukee.

Danny was on crutches after breaking his leg while skiing cornices at Arapahoe Basin. I used it as an excuse to take care of him for the day. He told me all about life in Colorado. I hinted about how much I would love to visit his State someday. We shared the same silly sense of humor.

Danny flew back to Denver on Monday.

My boyfriend and I broke up on Tuesday.

A few days later, I received a letter from Danny inviting my sister and me to the Telluride Bluegrass Festival June 19th.

I flew out to Denver for a three-day weekend. He wined and dined me in Denver. Then we drove to Telluride. I enjoyed the amazing music while relating to someone I felt I had known my whole life. 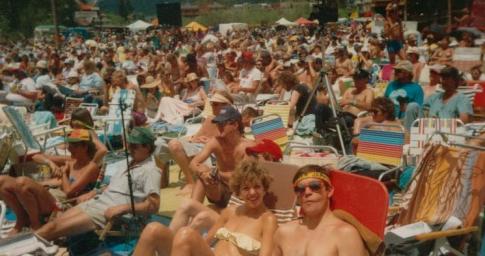 We got along so well that when he flew to Madison to see me over 4th of July weekend, we got the priest, the church and set the date to be married on October 10th.

The priest insisted we state that we began dating on Memorial Day.  A three-day-weekend in Telluride only two weeks before, wouldn’t fly with the Catholic Church.

Twice I tried to contact her with our story, but I guess it wasn’t dysfunctional enough.

Flash forward 25 years. Our children are twenty and twenty-two-years old. I think they have heard the complete story by now and realize that we took a leap of faith after dating for a very short time. They also know how much we love each other. They would say, “It’s all good.”

More secrets will be revealed on Friday…