When you think about how many films you have viewed during your lifetime, have you ever wondered why some remain timeless? They can be watched over and over again without losing their impact.

It’s a Wonderful Life is one of my favorites. Somehow this Christmas tale produced and directed by Frank Capra has kept its relevance every year since it was released in 1947. It still is #1 on the American Movie Institute’s list of most inspirational films. The movie is based on a short story written in 1939 by Philip Van Doren Stern called The Christmas Gift.

I am about to start on my last rewrite of my novel and examined this movie in a completely different way. Not as a movie-goer, but as a writer. I  discovered its magic and why it has left audiences spellbound for the last 66 years.

The first scene sets the tone for the movie. It starts on Christmas Eve with prayers being said for George Bailey while the snow floats down on Bedford Falls, New York. Then it cuts to the stars in the sky where Saints are discussing how to keep George from ending his life through the help of Clarence the guardian angel who wants to earn his wings.

The story’s climax is introduced in the first scene. Whoa! What a concept. Even before meeting the protagonist, George Bailey, we learn that he is loved by many, is in trouble and wants to end his life.

We have compassion for the protagonist. My eyes still well up with tears when young George is cuffed in the ear by the pharmacist after he refuses to deliver pills accidentally filled with rat poison. And that is in the first ten minutes! After that scene, I am hooked into watching the movie all over again.

In the beginning, each scene has its own climax and ending. What a great idea! Flashbacks show Clarence the events leading up to that fateful day and how George impacted many of the people in Bedford Falls. This also introduces the characters. They are told like individual stand-alone stories so Clarence can fully understand George’s motivation and so can we.

The plot is clear and relatable. The mystery of why positive and lovable George Bailey would want to end his life keeps audiences glued until the climax. Even though I know what is going to happen, the structure and drama of each scene keeps me watching. We learn about the lives he changed through his own sacrifices and why he is loved by so many. 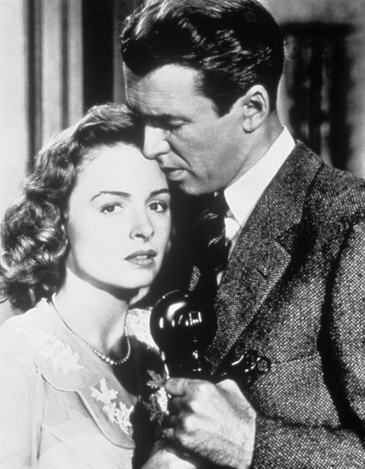 The protagonist is a quirky and likable character. George is direct and speaks his mind. He is filled with enthusiasm and gumption in hopes of traveling the world someday. His positive outlook is infectious and his out-going personality shows courage even as a young boy. We admire George’s willingness to risk his own life and eventually his livelihood. In the end of the story he wants to take his life so his wife can use the life insurance money to pay off the bank’s loan.

The antagonist is introduced early. Mr. Potter is a lonely and greedy old curmudgeon confined to a wheel chair. He owns a competing bank and wants to take over the Bailey Building and Loan so he can take control of Bedford Falls. When Potter insults George’s father, twelve-year-old George Bailey defends him and gives Potter a shove as his father guides him out of the room. This sets up the tension for the story.

The climax of the story rocks! In the last half hour of the movie, George wishes he had never been born. Clarence shows him what life would be like if he got his wish. The town is in shambles and no one but greedy old Potter shows any happiness.

The protagonist learns something. George realizes that he does have a wonderful life and he wants to live. 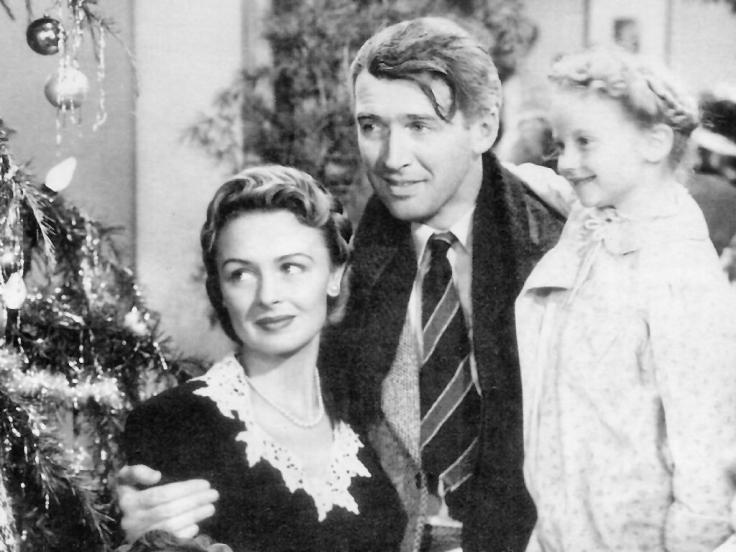 “Every time you here a bell, an angel gets his wings!”

There is a moral to the story. You impact so many lives in ways you will never imagine. No matter how bleak life gets, there are people who love you and would be willing to help if you let them. Brilliant! It also introduces the comforting idea that there is a guardian angel watching over us.

I cried again while watching this movie before writing this post and will gladly watch it again on Christmas Day. It makes me wonder what life would be like if I had never been born. I have a pretty wonderful life too.

It is ironic that the history of the film also has a message for writers, movie makers and anyone else trying to accomplish a goal. Never give up. It didn’t meet box-office expectations when it first came out, but eventually became a Christmas classic.

What is your all-time favorite movie?

Do you ever analyze them?