The cards have been sent with 20 cents extra postage, the stockings are hanging perilously close to our gas fireplace, and I ate a dozen of the cookies I baked for the last exchange of the season. Tonight I am basking in the twinkling light emanating from all of the decorations inside my house while the electric meter is whirring outside in the bitter cold.

On the 6th night before Christmas, there are presents to be wrapped, but I can finally take a deep breath and relax. As I sip my first cup of tea, a memory of a Christmas from long ago swirls back from the past.

Kelly was five-weeks-old. Danny and I lived in a Boulder apartment on the third floor with outdoor steps. It had snowed and kept snowing. It was three days before Christmas and we would fly back to Madison, Wisconsin to celebrate the holidays with our families. Our flight would take off at 4:00 PM.

Danny sat on the three suitcases so I could snap them shut. Along with Christmas presents, they were filled to bursting with every baby item we owned along with heavy sweaters and clothes for a christening. I also packed extra baby bottles, a breast pump and cloth diapers. I was new to the Boulder granola thing, but had embraced the idea of going green. I planned to wash them at my parent’s house and reuse the ones I brought. What was I thinking?

An hour later than we had planned on leaving, I finished packing. Danny carried the heavy suitcases down the slippery steps and threw them into the back of the Honda. I struggled with Kelly and a diaper bag while Danny ran back upstairs to get his brief case and carry-on bag. You could say that we were loaded.

While driving down Foothills Parkway, wet heavy snowflakes splattered on the windshield. We were almost out of Boulder when I panicked.

“Danny, I forgot my purse.”

He never said a word, but drove right up and over the median, made a U-turn, and headed back home.

I apologized, but he remained quiet. He swung into the parking lot, ran up the stairs and then emerged with the leather bag I had forgotten. We only had an hour and a half to get to the gate. We would miss our flight. My heart sank.

Kelly slept as we drove in silence. At the turn off to Stapleton Airport, cars were backed up a mile. The snow piled up and turned to gray slush as exhaust puffed out of the cars ahead.

After being in bumper to bumper traffic, it loosened up. Danny drove past all of the long-term parking lots.

“What are you doing?” I asked him.

“We don’t have time to park the car,” Danny said.

He pulled into the passenger drop off and unloaded the car. I held Kelly in his car seat, while holding my purse, a diaper bag, and a carry-on. A tall black man stood behind the check-in booth and asked for our tickets.

“Are we too late?” Danny asked.

“It shows that the flight hasn’t departed,” he said, “If you hurry, you might make it.”

Danny pulled out a business card and started scribbling. “Here is a number of a guy who can pick up the car. Can you park it for me?”

The man just stared at him and said, “Sure.”

Danny handed him the card, the keys, and $20 and said, “Thank you very much. Merry Christmas.”

I just stared at Danny as he grabbed his briefcase and grabbed the handle of the car seat from me. We started to run.

Doesn’t it always seem like when you are in a hurry, your destination is in the most remote location? We sprinted while overdressed in winter clothes, coats, hats, and gloves all the way to security and then to the end of the terminal.

After running for what seemed like miles, we finally made it. A crowd of people stared at us as we approached. It was 4:25.

Danny and I stopped and caught our breath. We hadn’t missed our flight. He raced up to speak to someone at the desk. The snow had been plowed, but there was something wrong with the plane.

We found a seat as the heat rose from my perspiring body and we waited.

Overdressed for a really long stay at the airport or what?

For hours we waited. We were told to stay nearby in case we could get a flight out with another plane so we never went to a restaurant to eat. Kelly nursed.

Soon we ran out of diapers.  Danny bummed a disposable from another passenger. As the crowd grew restless, some went out looking for something to eat, but the restaurants closed at 10:00.

We flew to Chicago at 2:00 AM. They comped us a room at a nearby hotel where we took showers and slept for a few hours. We slipped on the same dirty clothes and flew out at 8:00 AM.

When we finally arrived in Madison Danny said, “From now on everyone can come to Boulder for Christmas.”

My sister Patty and Dad were a welcome sight at the airport 18 hours later!

That began a tradition that lasted until last year. My father can’t fly to Colorado because of a heart condition and my children and sister are scheduled to work through the holidays, so we will travel back to Madison in January! 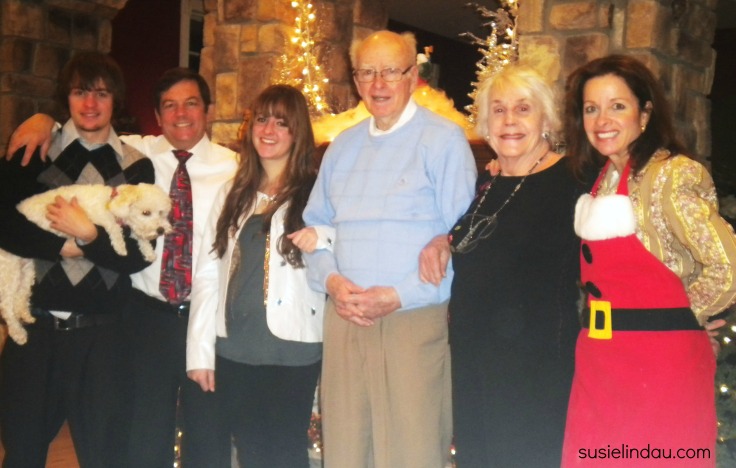 I can’t wait until January!

Do you have any nightmarish travel stories?

68 thoughts on “The Nightmare Trip Before Christmas”