Snowstorms usually squat on a few states before evaporating in the glint of winter sunshine. As if on snowy steroids, these frosty freaks have grown exponentially in recent years. While plodding along and dumping tons of snow, they have buried the country, transforming highways into hockey rinks and cars into pucks. White-out blizzards and sub-zero temperatures have frightened the red liquid in thermometers into hiding in their spherical basements. They have often left a death toll in their vicious icy wake. 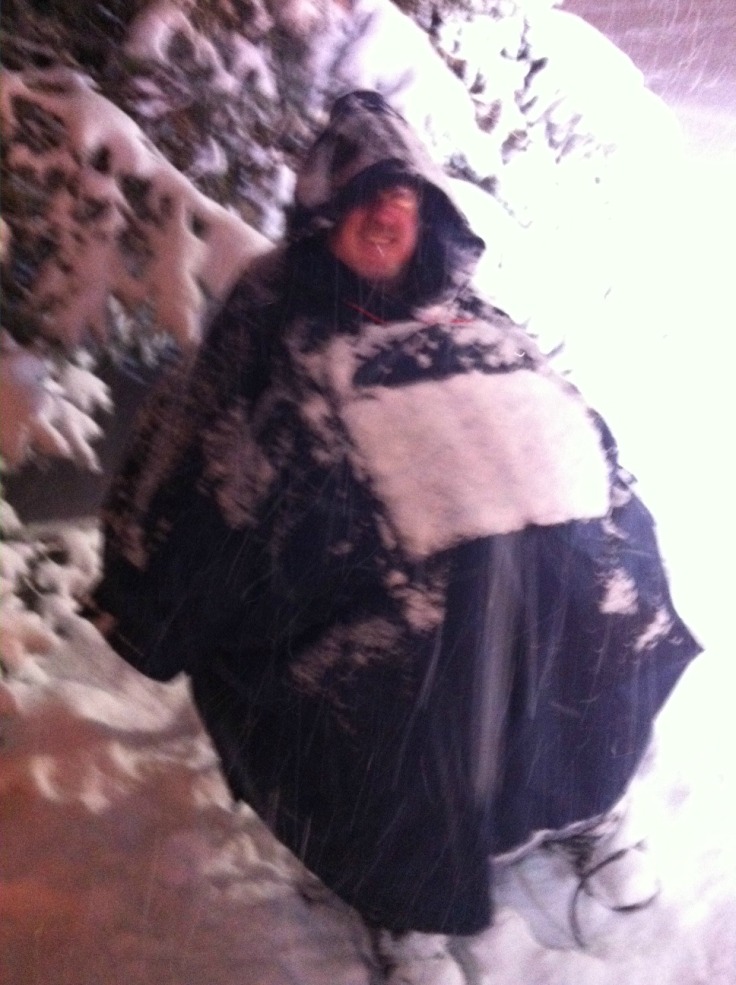 Joe is protecting his sound equipment from Draco while on location.

My brother Joe McCartan is a sound technician. A few weeks ago, he was summoned into the jaws of icy death by The Weather Channel as another massive monster pounded Wisconsin. He found out this was no ordinary snowstorm, it was Draco! …cue diabolical music…

We are all familiar with Irene and Sandy, named for a hurricane and a super storm. The aftermath of those girls will be talked about for decades maybe even millennia to come. In an attempt to keep track of winter storms, The Weather Channel stepped up and named them for 2012-2013.

Athena – Among other things, she is the Greek god of civilization, law and justice. Athena was the first dreaded monster who nipped the heels of Super Storm Sandy.

Brutus – From the Roman Empire or the Canadian band. Either way, he rocked the Northern Rocky Mountains.

Caesar – A Roman Dictator credited with the rise of the Roman Empire. He marched across several Midwestern states and Colorado where snow totals reigned supreme.

Draco – A constellation in the Northern sky. Also means dragon. My brother saw his frosty breath while Winter Storm Draco trudged across the Midwest and then flew on ragged wings into the Northeast and parts of Canada.

Euclid – A Greek mathematician.  What? Specifically geometry. Okay, since we are talking about the storms growing larger in mathematical terms, I’ll accept that. Also means good glory as in, “Good Glory Herb! Did you see the size of that storm?” He spawned 32 tornadoes in six southern states and set a record, of course.

Freyr – The Norse god of fair weather. Fair? Really? This storm began in Ohio and reached his icy fingers into the nether-regions of 16 states including Maine!

Gandolf – Check out the spelling! It is a character in the William Morris fantasy called The Well at the World’s End written in 1896.  This wintry wizard created blizzard conditions in Montana, Idaho, North Dakota and Colorado, and threw down 46 inches of the white stuff in Utah.

Helen – From Greek Mythology. Her abduction caused the Trojan War.  She began her rampage in Texas and mucked it all the way up the Eastern Seaboard to freakin’ Maine!

Iago – A character in Shakespeare’s Othello. He is a dastardly villain who hates Othello and sets out to ruin his life. Winter Storm Iago did just that when he pummeled parts of Mississippi and Alabama along with six other states.

Many suffered the wrath of Jove the thunder-god, Khan the Mongolian, and the moon goddess Luna which have all struck recently.

That is the list of winter storms so far. Did you notice they are a little heavy on guy’s names? God’s dominate the list, but where the heck did Q come from? According to their definitions, (see last link) it’s a New York Subway!

I wonder what names they will choose for the 2013-2014 season. The name Susie should at least be considered.

In the meantime, Magnus could be a droplet of water in cloud over the Pacific right now. He will become the next monstrous beast to bring a wintry blast. I am hoping that one of the remaining storms squats on Colorado and brings much-needed snow to the Northern Mountains and moisture to Boulder County.

We interrupt this blog post to give you breaking news.

What do you think of naming Winter Storms?

What names would you add?

Why We Name Winter Storms

Winter Storm Chart from – you guessed it – The Weather Channel

77 thoughts on “An Unnamed Threat No More!”