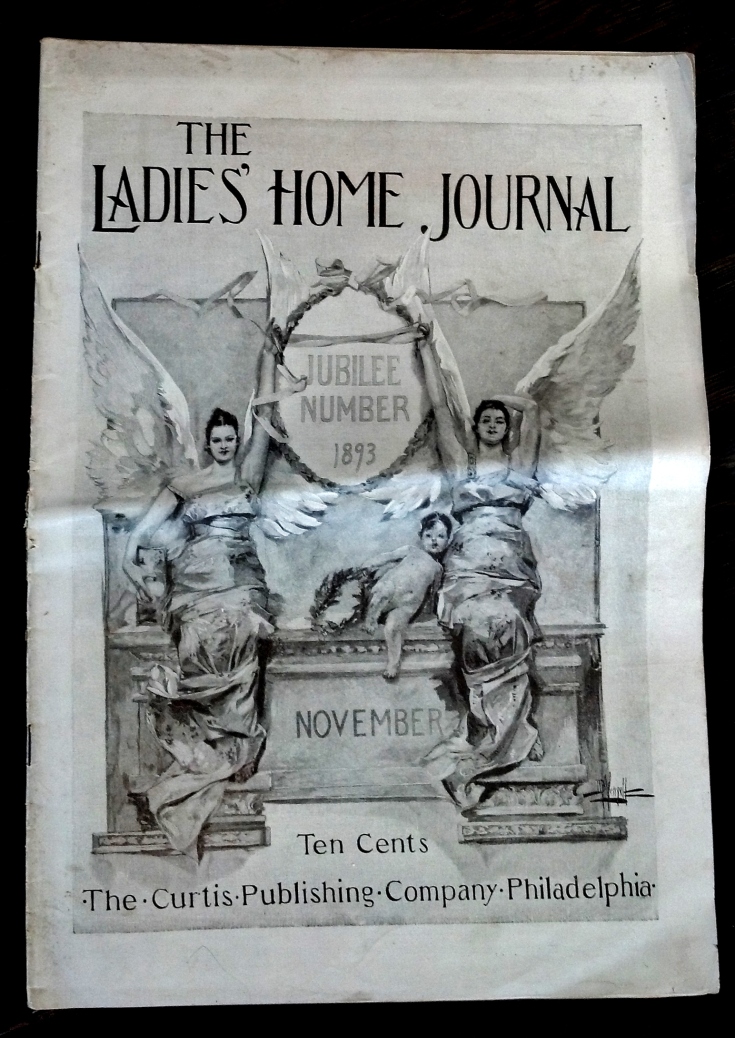 Many years ago while visiting Wisconsin, I drove to a rural farm sale outside a small town. It was my last stop after several garage sales. Price tags hung from farming equipment along with assorted household items and antiques. It drew a crowd of curious neighbors as well as treasure hunters. I fell into the latter category.

Drawn to the tables laden with books, I found ancient leather-bound volumes and others in cloth. I sauntered along the stacks of old family Bibles and velvet photo albums. While leafing through Ladies’ World and The Ladies’ Home Journal magazines from the 1800’s, one raindrop plopped down on my head followed by another. I grabbed a box.

After filling it with as many old books and magazines as I could carry, I paid the lady $5.00, and staggered to the car just before the sky opened up and it poured.

I took the magazines home and glanced at the fine drawings and paintings. As an illustrator, I really appreciated the attention to detail. No photographs were included in these early issues. I was amused at the old advertisements, but nothing grabbed my interest, so I put them away and forgot about them.

Today, I read The Ladies’ Home Journal from 1893 with a different perspective. Now that I am a writer, several ideas jumped off the 120 year-old pages.

Long fictional stories and excerpts of books were included in each of the three issues I purchased. All were beautifully illustrated and captioned. Back in the 1800’s, reading was a very popular form of entertainment.

What really smacked me upside the head were the advertisements for one year subscriptions.

Inside the cover of The Ladies’ Home Journal was an advertisement for Mark Twain’s, The Century, FREE to anyone who subscribed to the magazine. This was a leather-bound edition! I believe Twain’s idea to advertise his book by giving it away, reached a wider audience. This compilation of short stories was perfect for the type of reader catered to by the Journal. 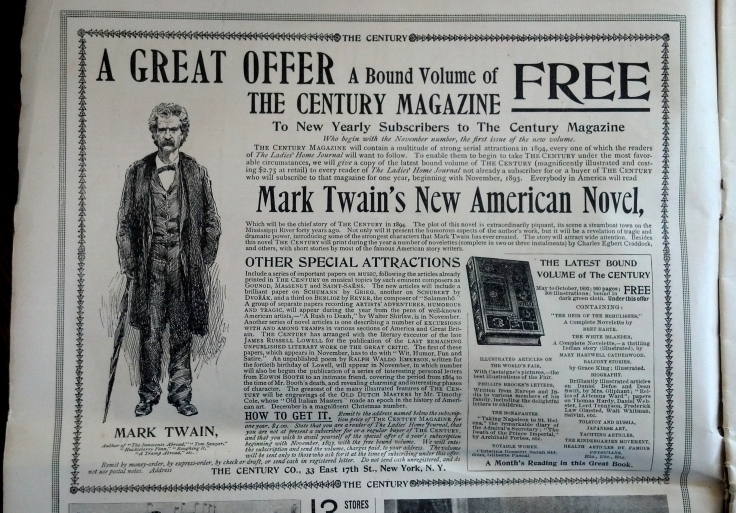 At the time of this periodical’s publication, many authors feared short stories and magazines would take over the publishing industry. This point is often made to compare the same fear many have about ebooks replacing real books. It didn’t happen then and many believe it won’t happen now.

The first article by Frank R. Stockton, explains how he garnered a huge audience by frustrating them. In a beautifully illustrated essay, “How I wrote ‘The Lady or the Tiger?’” he defends the history of his controversial short story.  It caused quite a “hoopla” or “hullabaloo” back in the day. 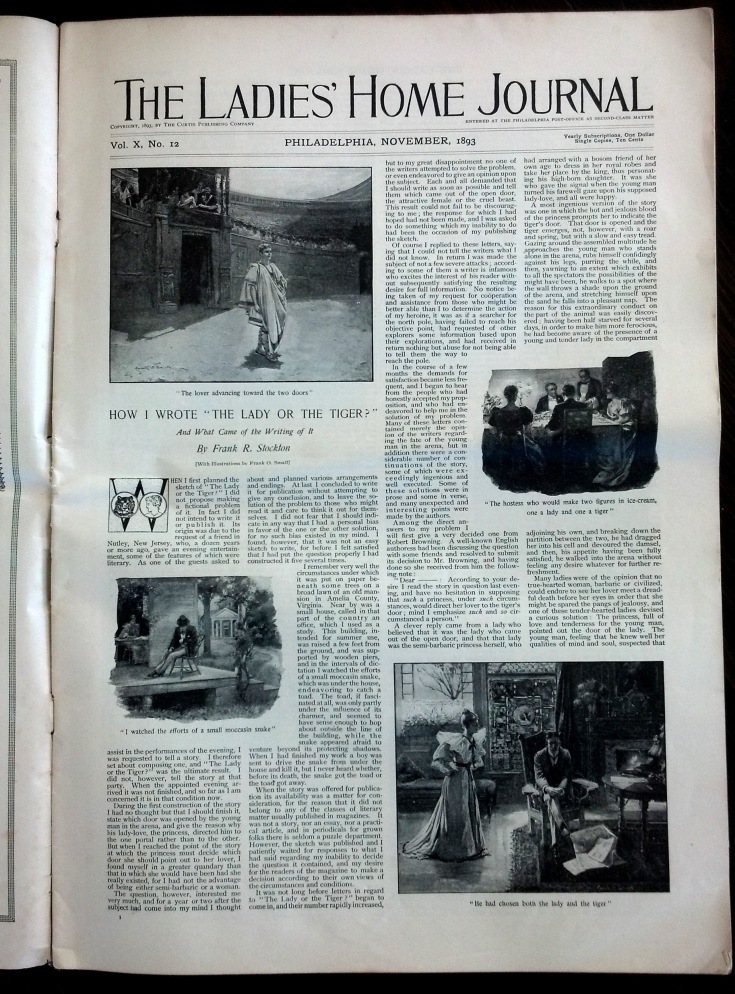 Stockton was invited to a dinner party along with several other literary guests. As part of the evening’s entertainment, he was asked to prepare a story. When he didn’t finish it in time, he demurred. Later, he completed this ultimate cliff-hanger about a young man who falls in love with a princess who becomes his lover. They end up in an arena which has two portals. A tiger paces behind one of them. The princess tells her lover to open one of the doors. He let the reader decide which one. 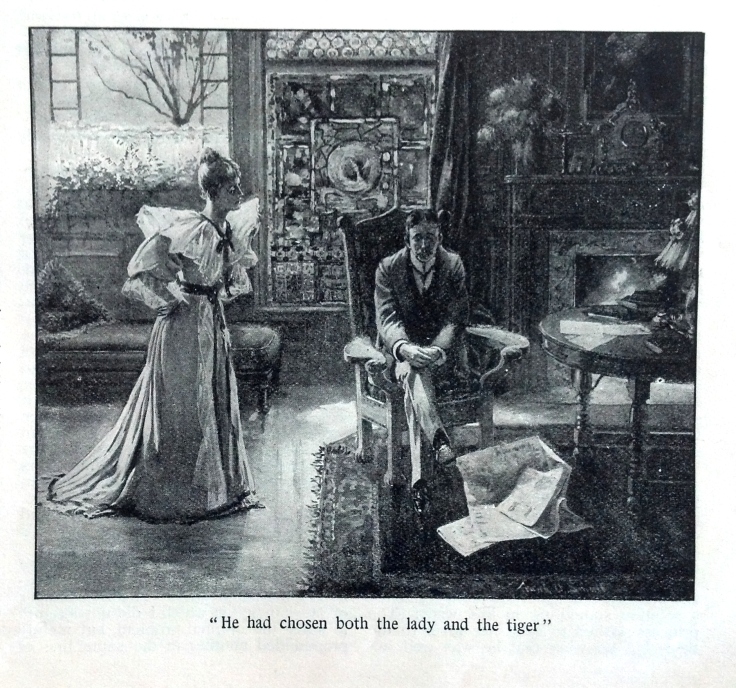 He received many letters from irate readers left in the lurch. Many offered their own resolution to the ending and begged him to finish it. Most women couldn’t fathom the barbaric nature of a woman who would send her lover through a portal to be eaten by a tiger.

A second book was written with more detail about the lives of the two characters, but still didn’t include an ending. The readers went wild again. At one point, graduates of Vassar College put it to a vote. The tiger received 18 votes and the lady only six.

Ten years later, readers were still talking about it. Not only did The Ladies Home Journal showcase the author, but offered his short story along with eleven others for free along with a one year subscription to Scribner’s Magazine. 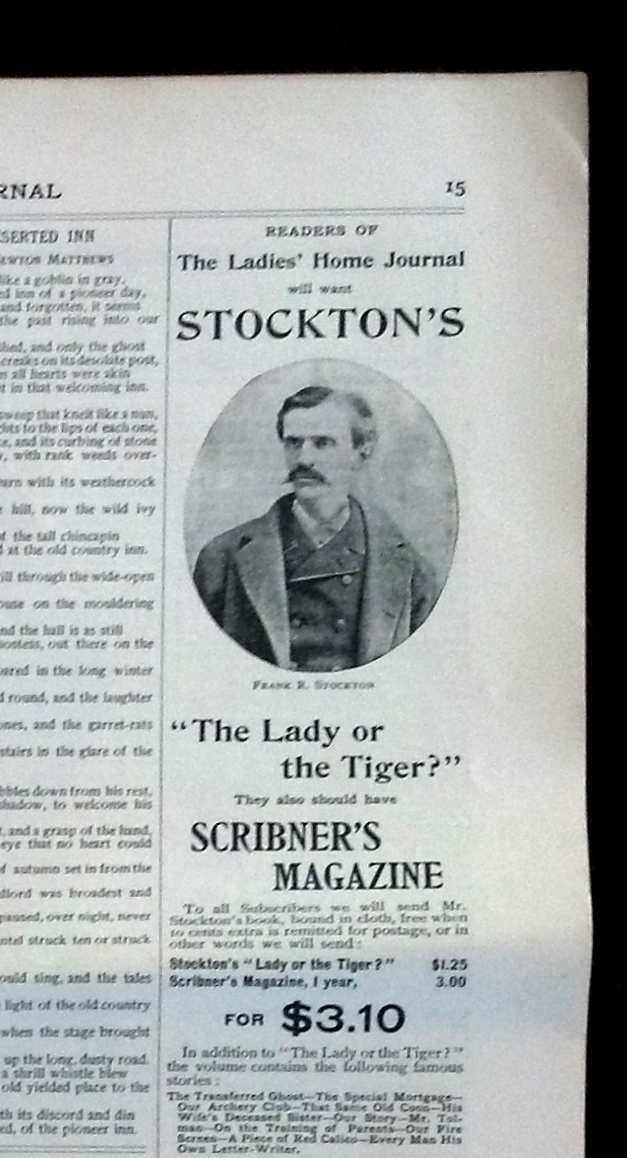 The book is offered free with 10 cents postage and $3.00 subscription.

Like so many who have written their first book, I am watching the publishing industry and new authors to see how they approach selling ebooks. I had been concerned after seeing prices drop from $5.99 to $2.99, and then given away for free on Amazon.

In 1893, there were probably those who thought Twain foolish when giving away The Century. I would bet the giveaway put his work in the hands of many who may not have been acquainted with the great writer.

Today, that is the goal as well. The free price is usually a limited time offer and it gets the book out to more people and the writer’s name on the lips of many.

Writing controversial books is still an effective way to get people talking. Just look at Fifty Shades of Grey!

No matter how many people are in a writer’s platform, a book is still sold by word of mouth. The more tongues wagging, the better the sales.

Here I am in 2013, reading this old magazine from 1893 and can still learn something. Now that’s what I call a treasure!

What do you think about giving books away?

Do you think controversy sells?

Scott Turow and His Sinking Ship

The Nutley Hall of Fame