I made it through the double mastectomy in May knowing I would soon be surrounded by beauty in some of my favorite places while eating delicious food.

My husband Danny and I flew to Barcelona and met our daughter who studied abroad. It had been over five weeks since the surgery and I still had some lifting restrictions. Being without cancer for the first time in years, my energy level soared! We hit the ground running and didn’t stop until the cows came home at O’ dark thirty.

Oh, glorious food! I tried to watch my portions since everything was prepared with simple ingredients and lots of butter. Chocolate croissants melted in my mouth, every morning. Restaurants used seasonal fruits and vegetables. I entered food nirvana.

After driving through France, we took the train to England. What a trip.

The timing rocked. The European adventure took my mind off my health and upcoming breast reconstruction surgery on Wednesday, August 28th. Yep. I have one more step in the breast cancer journey. I am lucky. As the poster child for early detection, I don’t have to go through chemo or radiation. My treatment consists of taking a Tamoxifen pill every morning. How hard is that?

Back to reality. When I arrived home, I weighed myself, but wasn’t too surprised. I didn’t gain any weight. We had walked for hours every day while on vacation and burned off the calories from the rich food.

Two days later, I had an appointment with my reconstructive surgeon. We discussed the swapping of the hard expanders behind my pectoral muscles to the silicone implants. This is not the silicone of the 1990’s. It is the same material used in hip and knee replacements.

I was looking forward to this routine procedure, so I can sleep on my side again without pain. It seems nothing in my life is routine.

He examined my breasts and scowled.

NOTE TO SELF: It is never good when a surgeon scowls while examining your body.

He didn’t like how my boobs are spaced apart. “I’ll have to reopen your pockets and move them closer together to give you a little cleavage. (Cleavage?) I will also do a liposuction procedure on your buttocks or flank. (Liposuction? Are you kidding me? What the heck is my flank?) I’ll inject some fat around your breasts to make them look more natural.”

Do I really need cleavage? The only time I ever had cleavage was in a Victoria’s Secret push up bra.

It’s my only chance to have nice bionic boobs. Let the man do his job. I’ll never need a bra again. They will defy gravity.

I knew he would be reopening up my horizontal scar across each breast, but reopening the pocket inside was something else again. And liposuction??? I thought about my self-control when eating in France.

After he left, I asked the nurse. “Is opening me up again to move the pocket a normal part of the procedure?”

“He does it on some patients.”

Then I asked her about tennis. I had been under the impression that at 8 weeks after the double mastectomy, I could participate in any physical activity.

“I wouldn’t play. I was a tennis player too and know how much upper body motion is used. What if you fall?”

I was so bummed, but I knew deep down she was right. I can feel the plastic backing of the nylon-like cups in my chest all the time. They are sewn behind my chest wall and don’t move with my body. The  I can’t afford to tear the sutures. Sometimes the interior incisions still  hurt when I stretch when yawning let alone stretching to hit a ball.

I had a physical therapy appointment the next day. I asked the therapist if moving the pockets closer together under my skin was normal and she said, “No. It’s usually just a simple exchange from the expanders to the silicone.”

Crap! So in a week I will be opened up once again. It is supposed to be a lot less painful since the surgeon will remove the expanders and not my own tissue, but here’s the kicker. The liposuction is going to hurt like hell. I have to wear some sort of girdle for a while to help with healing and blood flow. **groan**

“Because you wouldn’t be making new fat, you would be enlarging your existing fat cells.”

“You are born with all the fat cells you are ever going to have. They expand and contract when you gain or lose weight.”

There wouldn’t be any fat generated in a place where there isn’t fat already.

“But my flat pancake-shaped buns don’t have much fat either, so wouldn’t it help if I gained some weight before the surgery and liposuction?”

I still don’t understand except that most of the weight gain would be temporary. The fat cells would shrink again when I start playing tennis. My breasts would look horrid like those photos on Google of the 90-year-old grandma with fake-out boobs in a bikini on the beach. Yuck.

Before I left, the physical therapist admitted it wouldn’t hurt to gain five pounds. And to think I watched what I ate in France. Dang! 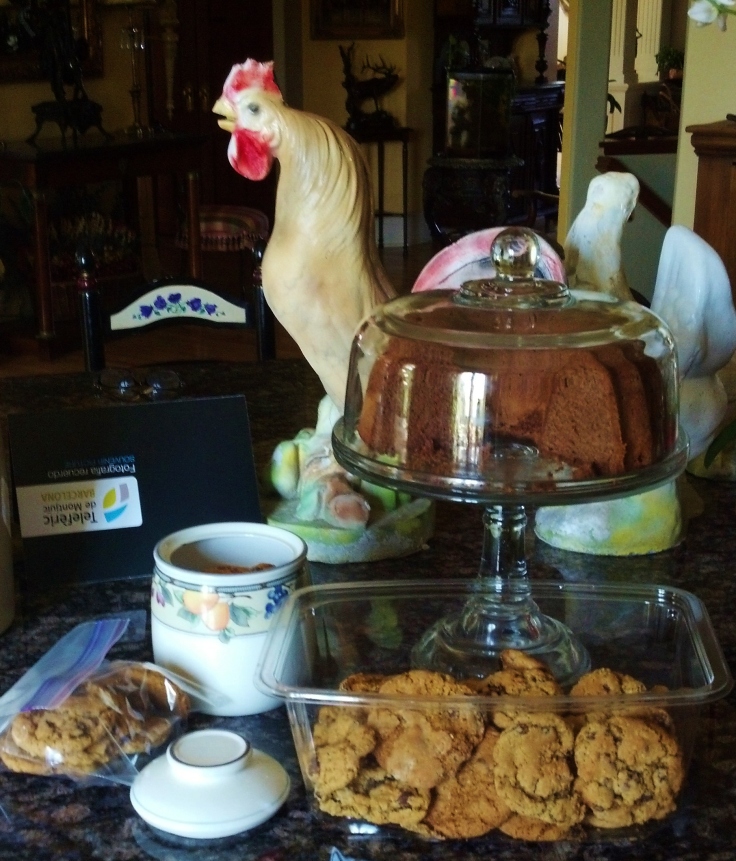 Homemade is just not the same…

I baked like a madwoman. Chocolate cream cheese bundt cake and oatmeal raisin chocolate chip cookies are within reach. I haven’t walked for more than an hour or heard a cow moo since I’ve been back. There is a week left before surgery and I won’t have any problem gaining the weight. Now I know where the expression, “It’s a piece of cake,” comes from. Packing on the pounds is a piece of cake. Too bad it’s not a chocolate croissant…

117 thoughts on “The Boob Report – Back to Reality, Oops There Goes Gravity”