October is fright fest movie month. Even though vampires, witches, zombies and ghosts don’t exist (Wait. I believe in ghosts!), many of us will sit on the edge of our seats, spellbound with pulses racing. We will be held tight by the tension created in these movies. 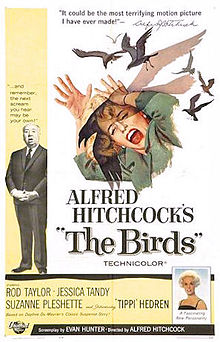 Foreshadowing is a literary device used also in film, to hint at a future event. The creak of a floorboard, the rustle of the wind, or the banging of a shutter is often followed by a shadowy figure inside the house.

Setting can contribute to foreshadowing as well: It’s a stormy night. The protagonist is alone. The power goes out. The phone is dead. That’s usually when the defenseless woman (sexist much?), decides to take a shower. In Psycho, we knew Marion Crane (Janet Leigh), was screwed as soon as she turned on the faucet.

In the premiere of the television series American Horror Story, backstory is used as foreshadowing. A young witch has been burned at the stake prompting a visit to the coven by a Supreme witch. She is there to teach the girls how to protect themselves. Soon we find out they have their own ways of exacting revenge on mere mortals.

While visiting Wisconsin, I took my parent’s collie for a walk. This particular still morning lay adrift in fog. After stepping out of the house, I returned for my cell phone. We strode to a nearby wooded park as usual. I stopped and photographed the gloomy lake.

Instead of continuing our usual routine, I looped back a different way through the park. As I sauntered up the narrow road, a huge branch cracked and tumbled down. At first I thought it had fallen in the forest. After continuing up the road, the huge healthy limb lay across my path right ahead of me. Good thing I stopped to take some photos.

If the fallen limb had occurred in an October movie, it would foreshadow some terrifying event.

It could be the precursor to an unusual storm that would level forests and entire neighborhoods. Its clouds could carry an evil virus which transforms people into zombies.

Or it could be the first indication that a new form of insect had evolved eventually devouring crops and then humans.

Or the protagonist could continue to elude death until death catches up with her. Then it would move on to its next victim. Hey. Wait a minute. That hits way too close to home.

Do you watch scary movies and TV shows in October?