Last week, my breast reconstruction doctor joined my radiologist in giving me the thumb’s up. I had been told I had no restrictions over the phone, but this appointment made it official. I won’t see either of them until next summer. Yeah baby. It’s all good! I just have to take a Tamoxifen pill every day.  I felt like celebrating so my husband Danny and I headed up to the mountains.

We left at 5:00 on Valentine’s Day and sailed up I-70. After Idaho Springs, we came to a halt and our progress could be measured in inches. I could have sworn I saw an elderly lady with a walker pass our car. Our two hour trip soon stretched to three. We worried that our 9:00 dinner reservation would be cancelled. Wet snowflakes flew and collected on the road. We suspected an accident had caused the jam. I used two of the hours stuck in traffic to hash out a screenplay I am working on. I figured out three plot lines, worked on casting it, finally decided on Robert Downey Jr., and we still crawled up the mountain highway.

At 8:30, I started cussing like the truck drivers crawling alongside us. We’d never make our dinner reservation. Approaching a curve in the road, we could see what happened. Idiots with front-wheel drive had spun out in the left lane tying up traffic for miles and miles! They had to be towed. I’ll never understand why Colorado stopped requiring chains for everyone without all-wheel drive. Once we got past the goofballs without chains or a clue, we drove through the Eisenhower Tunnel and flew down the mountain to Breckenridge.

Danny called the South Ridge Seafood Grill. If we could arrive before 10:05, they could still serve us. We made it with 4 minutes to spare! Good thing I was driving. We had a fantastic dinner. The service was excellent. It was as if we arrived early. We even shared a few ghost stories with our waiter!

With no physical restrictions, I was ready to roll Saturday morning. I posted my Use Me and Abuse Me Day blog party and hit the slopes. It was President’s weekend and my husband, Danny, and I knew Breckenridge would be crowded. It was overcast, warm, and windy. We quit at lunchtime and drove to go the skating rink. I grew up ice skating after school in Wisconsin, but it had been a couple of years. I strapped on my hockey skates and slid onto the ice. I needed to take a few laps before the the old muscle memory came back.

The next day, Danny rented AT (Alpine Touring) skis and I ran errands. We’ve owned this second home for 17 years and the recession killed our plans for remodeling, but Lowe’s opened in Silverthorne. Hello, home improvement! After arriving back home with dimmer switches, light fixtures and plans for gutting a bathroom, I felt like I needed some exercise. I took our Bichon Roxy, for a little walk in our Baldy Mountain neighborhood while Danny drove to the grocery store.

I could feel the high altitude as I sucked in the thin air at 10,500 feet. When I arrived at the end of the cul-de-sac, I heard a motor roaring down the road towards us. It was the little snow-cat I entered to win last year. A man pulled two kids on a sled. He drove up and over the huge snowy embankment, then waved and headed back up the road.

There’s an old mining road a half mile down the forested mountain from where I stood. It’s called the Sally Barber. Our family has hiked it many times. I had one of those Eureka (impulsive) moments. I’ll go on a little adventure!

Surely, he had packed down the snow on the other side of the hill by driving down the mountain to the mining trail. Roxy and I climbed up the snow mound. We scrambled down the steep hill and followed his tracks, but he had only looped around a couple of trees and backtracked up to the cul-de-sac. Ughh! Now what would we do? I didn’t want to climb back up, but the last time I attempted to walk to the Sally Barber in winter, I was without snowshoes. I sunk up to my knees. That night, I wore loose fleece pants which were pushed way up while my boots filled with snow. Danny watched and laughed from the top of the embankment. It took me more than twenty minutes to climb back up.

This is a record year for snow in Breckenridge with 315 inches of the white stuff, but this was also my, “Go for it!” weekend. Protected from the snow with layers of clothing, tight at the ankle yoga pants, and zipped up snow boots, I tested the depth. The snow came up to my knees. I suspected there there were 6 or 7 feet of snow in areas, but there was no turning back.

Downhill I went. Roxy trailed behind. All at once, she would go no further. With snow clinging to her fur and a sorrowful look in her eyes, I picked her up. What a wussy!

Now I had an extra 15 pounds of weight that could break through the snow. The sun dipped below the mountain peaks. Wet snow rained down around me. The wind picked up. I had a cell phone, but didn’t dare check it for fear the battery would die in the cold. I was more than warm. There is no better exercise than trudging through snow up to your knees.

I kept thinking the road should be right up ahead. I started to panic. Theoretically, I couldn’t miss it if I went straight down the mountain, but I hadn’t hiked it for a while and I wondered if I was walking at too much of an angle. It continued snowing. Darkness shrouded the dense forest.

I found a clearing, but that’s all it was, just a clearing. Roxy weighed heavy in my arms. I thought I heard her snoring.

Then a thicket of pines appeared. Assuming trees would grow more densely along a road, I became hopeful. I continued straight down and then stopped. What if the snow lies in big drifts and when I step down, we’re swallowed up? I cut a diagonal knowing the road was probably only a trail at this juncture, if it was the road. It’s plowed for a half mile from Baldy Road. If I continued where the snow wasn’t as deep, I might be safer. But carrying the dog all this way was too much. Screw it! I headed straight down and found a path between the trees. I peeked between them. I had found the Sally Barber! I stepped down, but my foot didn’t touch bottom. It was like quicksand. I tossed the dog out in front of me. I needed to distribute my weight evenly. Remembering what rescuers do when trying to pull someone from a hole in an icy lake, I got on all fours. I scooted the dog ahead of me and crawled down to the road.

I picked up Roxy again and gingerly stepped down on the snowy road. It only came up to my knees. Whew! I trudged to the center where snowmobiles, snowshoers, and hikers had trampled the snow down to a hard-packed trail. I unleashed our poofy lapdog. She bolted down the trail and took in all the scents of domesticated and wild animals. She was in dog heaven!

After hiking a half mile, my phone rang. It was Danny. “I’m almost done shopping. Do you want any raspberries?” It was so surreal! We looped back to the main road and hiked up to our house. Roxy slept like the dead. Okay. I did too.

Monday was a bluebird day. We rose early and hit the slopes. C-Dot warned drivers to get on the highway by 10 AM and everyone obeyed. No crowds! We were on the new Peak 6 chairlift when they opened up the bowls.

We hiked up and hit it HARD! Making fresh tracks reminded me of heli-skiing in Canada. 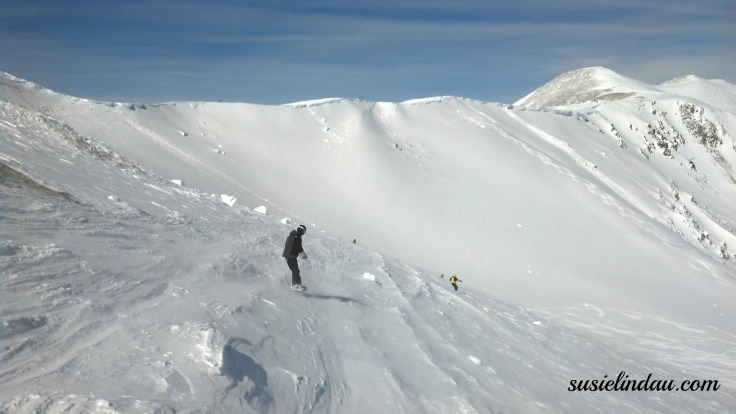 I even found Waldo! (Hansen)

Then we skied my favorite – Whale’s Tail. 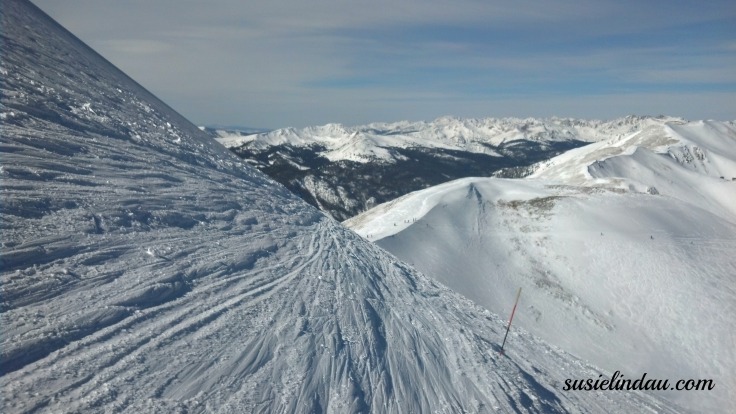 After skiing double blacks, ice skating, and having my own little adventure, I finally feel like I’m back!

What’s your idea of adventure?

Most of the photos were taken with my Droid phone. Click on them to enlarge!

77 thoughts on “I Had a Little Adventure While You Were Dancing! A Photo Essay”