We arrived in New Orleans and hit the street. After checking out the Oyster Festival, we had dinner while being serenaded at The Palace Cafe. I fell in love with the NOLA culture and its music. 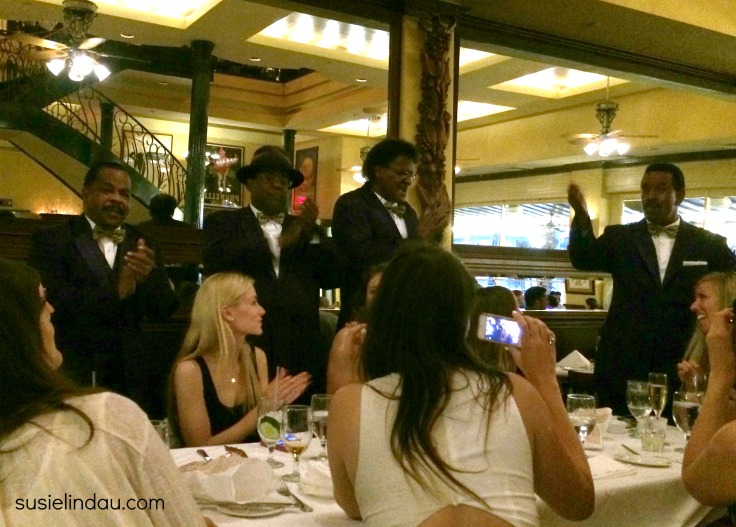 It was Saturday night and I had to find out what Bourbon Street was all about. While approaching the street, it seemed like Mardi Gras continued in full party mode. Music played through the open doors of all the clubs which lined the streets. 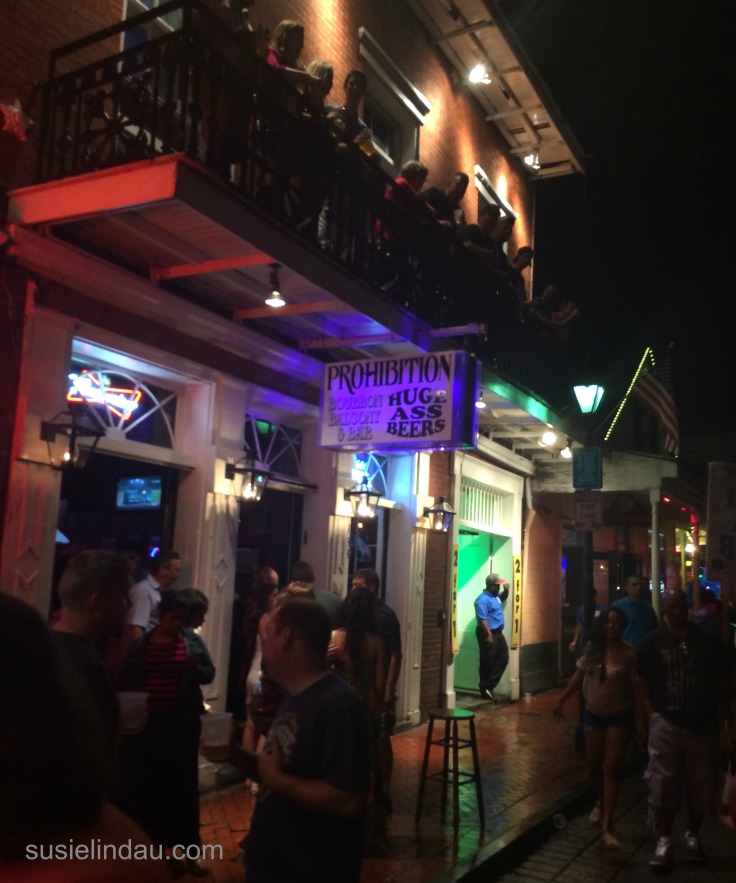 I pulled my husband, Danny into one bar playing one of my favorite songs, “Blurred Lines.” When the music slowed, we ran across the street. Bands, DJs and singers played with no cover charge. I was in heaven.

A selfie with new friends!

After we zigzagged the street and danced for an hour, I pulled Danny into a club where a beautiful black woman sang the blues. I noticed one of the scarves on her microphone was printed with pink ribbons. When she took a break, I complimented her voice and asked about the scarf. Her friend and aunt had breast cancer. It occurred to me that exactly one year ago, I had a double boobectomy. Wow! What a difference a year makes.

We wandered next door where another beautiful black woman stood on stage. The place was packed with black people and I said to Danny, “I bet she’s an amazing singer!”

She grabbed the microphone and said, “I need a black man, a white man, and a white woman.”

I looked around and was the only white girl, so I volunteered along with two other men. I followed them onto the stage.

The music started. When the black guy grabbed the mic, I realized I’d made a terrible mistake. It was KARAOKE NIGHT! I frantically looked for a screen projecting the lyrics. There was none in sight. The black guy rocked out to Michael Jackson’s Don’t Stop ’til You Get Enough. He mimed the words and had all of Michael’s moves. I had one single thought. “Oh, why didn’t I ever learn how to moon walk?”

While waiting, I told the white guy that if I got one of Jackson’s older songs, I’d be okay. If the song was more recent, I’d be screwed. He promised to help me out and dance while I faked it.

The white guy was up next with Billie Jean. “Why didn’t I get Billie Jean? I know that song!” I talked to the black guy and told him he had to be my back-up dancer.

I hung in there for a while and then faded. I looked back at the guys and they came to my rescue. It was WILD GREATNESS! The black guy grinded with me and the white guy danced all over the stage. Then the black guy grabbed the mic and finished the song! What a Wild Night!

NOTE TO SELF: Do not ever volunteer unless you know what you’re volunteering to do.
Pshh! It’ll happen again. I am waaaaay too impulsive.

The next day, Danny and I ate lunch in the French Quarter. A young lady, seated with a big group across the room, caught my attention. She stood up and pointed. “Hey! It’s Michael Jackson!” she yelled. Of course, I had to go over to talk to my very first fans. Hilarious.

And that my Wild Riding friends was my introduction to Bourbon Street and the first night in New Orleans. I lived to tell the tale….
Now I can add Michael Jackson Impersonator to my list.

Michael may still be rockin’ out in the great beyond, but he rolled over that night….