This photo was taken in Jackson Hole, Wyoming my senior year in college. Yep. That’s me with the bota bag. Remember those? My friend and I stayed with ski bums who worked on the mountain as ski hosts. Little did I know drinking while skiing could be a very bad idea. I would face surgery becoming even more bionic thirty years later.

I thought my hairstyle was a good idea because… 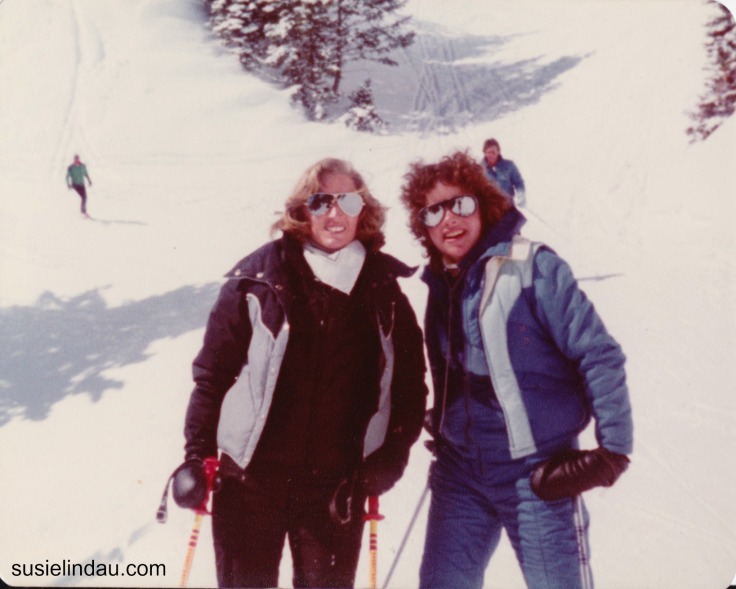 Right after the first shot was taken, I skied down Pepe’s Run and face-planted. Another mistake had been made. A friend loaned me his skis with a warning the bindings had been clamped down. The skis never released and my knee dislocated.

Was this next shot a premonition?

When I went to a doctor back in Wisconsin, he believed it was only a deep bone bruise. It was left untreated and the tendon shortened. My knee cap slid over and I’ve had a bad left knee ever since.

This year I skied a couple of runs and knew it was time to go to the doctor. He informed me of a new robotic procedure called a Makoplasty Partial Knee Replacement. On Monday, Jan. 5th at high noon, he’ll make an incision into my knee and will flip my knee cap over. He’ll attach a plastic disk to protect it from further wear and tear. Some kind of wammer jammer robotic thingy will be inserted into my thigh. The doctor will use my cat-scan to remove the remaining messed up cartilage and a little bone. Youch! Using the robot, he will screw in a metal plate replacing the damaged cartilage.

In twenty minutes, it will be over. I will no longer have a knee cap which grinds on bone. I won’t sound like one of Cinderella’s step-sisters creaking away as I walk down stairs, (Hey! I can go stealth!), or have a knee that resembles a sack of potatoes.

My doctor said I’d be back to regular activity right away. What I didn’t understand is tennis and skiing aren’t considered regular activity. I  need to heal up for six weeks and then this new and improved Wild Rider will be back and better than ever! I can’t imagine skiing without pain.

I have to stay in the hospital for antibiotics, so Monday night I’ll be live-tweeting during The Bachelor. (Wait. What other kind of tweeting is there?) I know. I don’t think my husband, Danny, will be able to handle it. Guilty pleasures will abound over the next few weeks. Bring it on 2015! I’ll be New and Improved!

I learned something. If you are going in for surgery, drink Vitamin or Smart Water the day before. Both contain electrolytes and make recovery easier. Who knew?

Do you have any old injuries which still bother you?

140 thoughts on “Becoming New and Improved Bionically in 2015”