When followed by the “Voice of Siri,” Susan Bennett, on Twitter, I freaked out. She’s REAL! I contacted her for an interview, crossed my fingers, and began my research. Along with her website, I found several videos and a podcast. I discovered she is also the voice of ATMs, GPS, Delta Airlines, Ford, Coca-Cola, Macy’s, McDonald’s, The Home Depot, Fisher-Price, Goodyear, VISA, Hot Pockets, Club Med, and Cartoon Network. Wow! She’s been busy.

Siri is an Apple IOS application which serves as a web navigator and all-round personal assistant. We all know Siri’s voice from Apple commercials. If you own an iPhone, you can press a button to ask Siri any question. 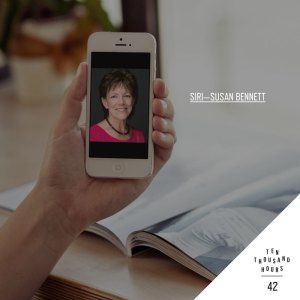 “Hey Siri. What’s the weather like outside?” She answers and includes a five day forecast. I thanked her this morning and she responded, “I live to serve.” Ha!

When Susan agreed to be interviewed, I just about fell off my chair! How cool is she? By the way, I love her name.

Hey Susan! Thank you so much for agreeing to do the interview. I was super stoked when you followed me on Twitter. Social media has become ALL six of the degrees of separation between people. It has made the world much smaller.

Me – Could you explain the process of how you became the voice of Siri?

Susan – I don’t really know!!  In this digital age, we voice talent are auditioning all the time without really knowing it.  I did some generic recordings, [random phrases and sentences], in 2005 for a text-to-speech company, so I believe they chose my voice from that company’s voice bank.

Me – When did you discover that Apple used your voice for Siri?

Susan – Siri first appeared on the iPhone 4S on Oct. 4, 2011.  A colleague of mine emailed me and said, “hey, we’ve been playing around with this new iPhone app…..isn’t this you?”  I went on the Apple site, listened to the voice, and recognized myself right away.

Me – What was it like to lose your anonymity in October of 2013?

Susan – That’s a hard question to answer.  It hasn’t really been a problem, but I have no way of knowing how many jobs I might have missed because people think of me only as the voice of Siri.  Sometimes they can’t imagine me doing anything beyond that, but check out my website, www.susanCbennett.com, and you can hear lots of non-Siri voices!

Susan – I don’t use Siri very often, only if I need an answer to something when I’m in the car.

Me – Who would win in a smack down, Siri or Microsoft’s Cortana?

Me – You are a self-taught musician and were a back-up singer for Roy Orbison. I understand you’re in a band with your husband. Tell us about that!

Susan – Actually, I play by ear, but I had 12 years of classical piano lessons, and didn’t really start singing until high school, when I started participating in musicals and choruses.  My husband, Rick Hinkle, a fantastic guitarist, singer, composer, and  I had a private event band for many years.  Now we play in a fun “Boomers Gone Wild” band that plays 60’s and 70’s music.  Music is a huge part our life!

Me – I’ve watched several interviews and have been impressed with how you can change the pitch and quality of your voice. Do you do any impressions?

Susan – No, not really.  I can imitate a lot of different accents and characters, but I’m definitely not an impressionist.

Me – I’m sure you’ve met all kinds of interesting people. Who would you absolutely love to meet?

Me – When you’re not singing or doing voice-overs, what do you like to do in your free-time?

Susan – I love to read, take Spanish classes (we have a fantastic group of 5 women who get together once a week para hablar en espanol!).  I also like to exercise/walk, get together with friends for lunch, and, of course, watch Downton Abbey!

Me – What are your current projects and what’s ahead?

Susan – I still do a lot of voice-overs…narrations, instructional videos, commercials, and messaging…..and I also do speaking engagements as the voice of Siri.  As for what’s ahead, it’s hard to say.  Lots of opportunities are popping up, so we’ll see!

Me – Your story is very inspirational. Is there anything you would like to add?

Susan – I became the voice of Siri after many years of singing and doing voice-overs, which I love.  So, do what you love, and you never know what might happen!

Thanks Susan! I’m so glad you stopped by the Wild Ride to chat with us. I can’t wait to see or hear what you do next.

Did you know a real woman’s voice was recorded for Siri?

Here is a funny demonstration of asking Siri questions.

90 thoughts on “Meet the Voice of Siri! An Interview with Susan Bennett.”