When my husband, Danny, was invited to go hut skiing the same weekend as our trip to Wisconsin, skiing won. You’re not surprised, are you?

Anyway, last Tuesday, Danny remembered we hadn’t transferred the tickets. I had spaced them out too. Duh! We would lose them on Thursday. One ticket could be used in April, but I couldn’t think of another time to go back.

While taking a walk on the trail near our house, I had a thought. Why should I stick around the house while Danny has fun and my mom’s eighty-fifth birthday is the same weekend? (Danny says I’m the queen of rhetorical questions.) Then BAM! I had a Eureka moment. I’ll surprise my parents!

This being totally last minute, I called my brother to make sure this would be a good time to come. He thought it was a great idea and arranged to pick me up at the airport. I hoped I wouldn’t give them a heart attack. My dad turned eighty-nine a couple of weeks ago and my mom would turn eighty-five on the 9th.

When I arrived at DIA, I had two hours to spare. Security always takes forever, but glancing over the railing, the line was non-existent. What? Was the airport shut down and I didn’t get the memo?

I sailed down the escalator and asked the security guy, “Where is everyone?”

“A plane ran off the tarmac in Chicago and there’s bad weather back east. Lots of flights were cancelled.”

While waltzing to my gate, I took a photo along the way. Okay. I took a ton of photos to get one that was somewhat acceptable. My arms are too short for selfies and they distort my face. The others looked like I was picking my nose.

I plopped down on a chair near the gate since I was tired from walking and my knee ached. Sitting down for two hours would aggravate it. My doctor had said “Have a great trip,” the day before, but I still worried about a setback. Then I overheard someone say our flight was sold out. Dang. I’ll be crammed between two people and won’t be able to move for two hours. Oh well, I figured I could elevate and ice it at my parents’ house.

A lady took the window seat next to me while I waited for someone to take the one on the aisle. I scanned the aisle while the cabin doors closed. No one showed up. YES! I scored an empty seat for my sore left leg. No lie. It was a major score! *

When I arrived in Madison my brother, Joe, picked me up. I was so excited, I forgot to pick up flowers for my mom.

We walked into the house and their Collie pranced into the kitchen. I thought he would go ballistic, but he just wagged his tail. He must’ve guessed something was up. I heard my mom ask, “Joe is that you?” from the TV room.

This was it! I hoped she would be okay with my surprise. She had no idea. Neither did I until forty-eight hours before.

Mom sauntered into the dining room where we stood in the dark. I hunted for a light switch, but couldn’t find one, so I asked Joe to turn it on.

She recognized my voice.

“SURPRISE!” I said and gave her a hug. 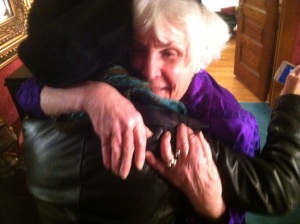 My dad has dementia, but he was happy to see me too! 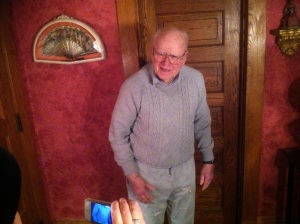 It was the best surprise ever.

Sometimes it pays to be forgetful or impulsive or both. As long as there are a few tears and no heart attacks, it’s all good.

*I got an empty seat on my return flight too. I should play the lottery.

68 thoughts on “My Impulsivity Can Be Surprising!”