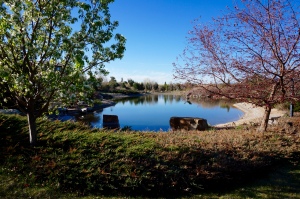 I peered out the window through bleary eyes while sipping my first cup of coffee and assumed my Bichon Roxy had carried something into the yard from a wastebasket. She has a doggie door. I’ve found socks and other sundry items, including underwear, scattered about our lawn, but it’s been a while.

Later in the day, I looked out from an upstairs window and remembered my early morning sighting. Something strange sat in the middle of our lawn. Although the grass hadn’t greened up its white surface gleamed.

I ran, okay, limped to the back door of the house and slipped on my shoes. Roxy accompanied me as I walked toward the strange shape.

“What the…?” A two-foot long algae-eating carp lay on the grass at least 40 feet from our pond. It hadn’t been eaten or even tasted from what I could see. 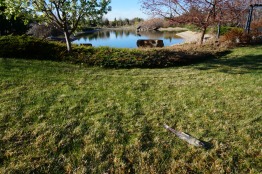 How did it get there?

Great Blue Herons glide into our pond for a little sport fishing (more like shooting fish in a barrel – this it the warm up for metaphors later in the story), and could have snatched the carp and dropped it into the snow. It might have landed on its head and become unconscious. Without any flipping or flapping maybe the big bird couldn’t find it. This seemed early for Heron who migrate later in the spring.

Usually they catch something smaller and eat it. Why didn’t they eat it?

Maybe it was an owl. Boulder County has a wide variety. The big fish could have jumped right into its claws. The Great Horned Owl I saw last summer could easily carry a fish that large.

I dismissed fox or coyote since it would be hard for them to sneak up on a fish with their paws paddling away.

We occasionally have hurricane force winds (one clocked over 130 MPH). A fish could have jumped and blown onto our lawn, but it’s been a couple of years since we’ve had winds that fierce.

A couple of weeks flew by, until one day, I sipped coffee through my bleary morning eyes and almost dropped my cup. Out in the backyard, at the exact same spot, lay another dead fish. 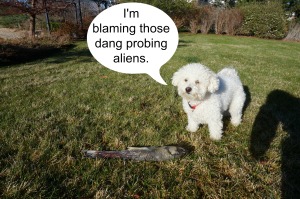 “What’s going on?!” I asked Roxy. I slipped on my shoes and a hoody and headed out the door with my trusty Bichon. Just like the last one, this fish was the same size, variety, and uneaten.

We’ve lived in our house for nearly fifteen years and I’ve found tons of toads and snakes, but no fish just chillin’ in the grass, not even a small, dinky one.

It occurred to me that Mother Nature might have sent us a metaphorical message:

Some animal has found a new sport, but which one?

What do you think happened to the fish? How did it travel to the middle of our lawn? Do you think it’s a message?