When my dad moved into the nursing home, I didn’t think an art show would be possible. I shelved the idea of a gallery opening. His amazing work has only been shown publicly at outdoor art shows once or twice, more than fifty years ago. He has always been a humble man and he remains unrecognized for a large body of artwork created during his lifetime.

Then Hospice took over. They came up with an idea to do a retrospective at the nursing home where he is living, the Evansville Manor, a few blocks from my parents’ house in Evansville, Wisconsin. Danny and I had to go.

Drawing had helped my dad with the transition into the nursing home. He would sit in the window of his small room and sketch from photographs or from a book of animals. A few weeks before the show, he stopped drawing. 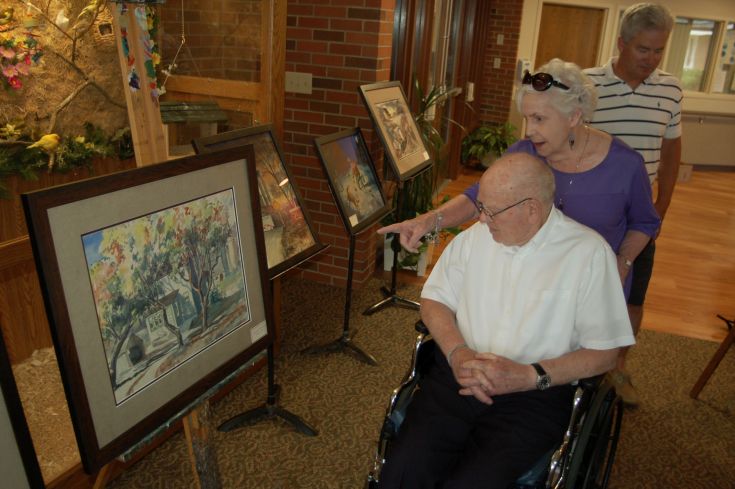 My mom had framed many pieces over the course of the last year. He had forty paintings to show. We set them up in order from earliest to latest work. 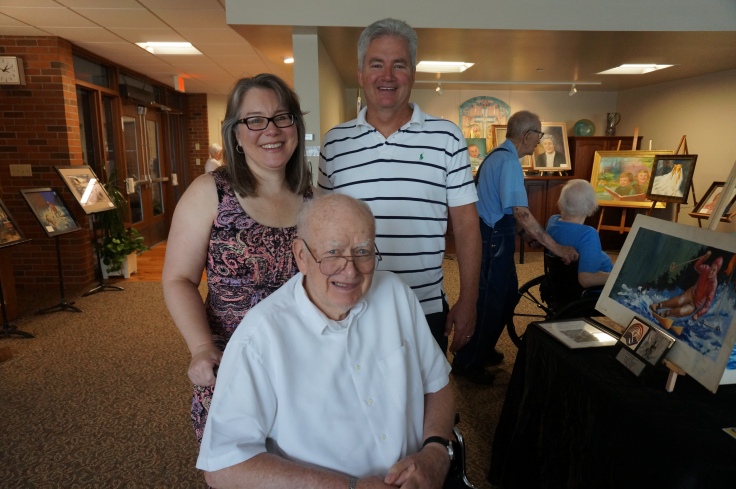 My cousin Patrick Zielinski and his wife, Linda, helped Danny, my brother, Joe, and me set up.

The show chronicled his early days on the farm in the town of Lake Five, our life in Madison, and family vacations, to the avant-garde and deconstructed drawings of the last year, due to dementia.

This was the portrait room. Why the bird painting? Dad painted it after my brother, Joe, was born. Three hungry mouths to feed. Danny noticed a lot of humor conveyed in Dad’s artwork. 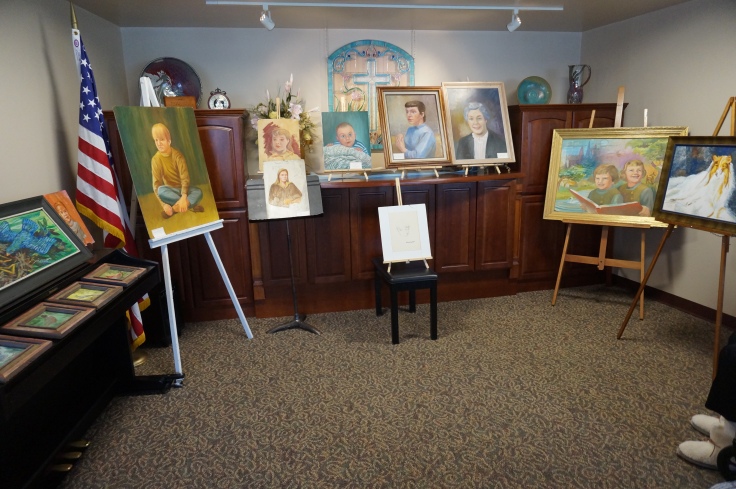 American Family Insurance recognized Dad for designing their logo. My brother is standing in the back. Yes. He got all of the height in the family.

Family and friends attended the show. Steve Pagelow, Joe, Danny’s sister, Lori Pagelow, Mike Siemion and you know the rest. I’m showing off my double jointed elbows. AKA Susie Slicer on the court.

Dad really enjoyed seeing his artwork again. I loved the old show cards which became billboards when he worked at Hansen Outdoor Advertising as their art director. 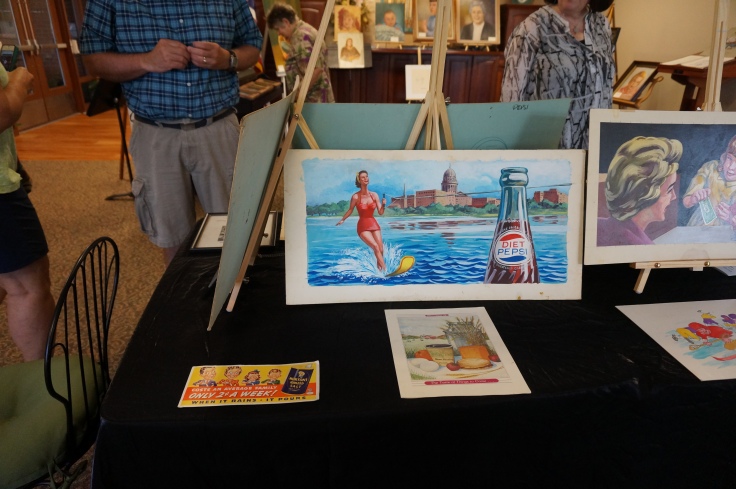 It was ironic to see the drawings he did while quarantined in the Air Force for rheumatic fever. That’s why he’s in the nursing home. Dad’s heart is functioning at 15% due to valve damage from that disease. 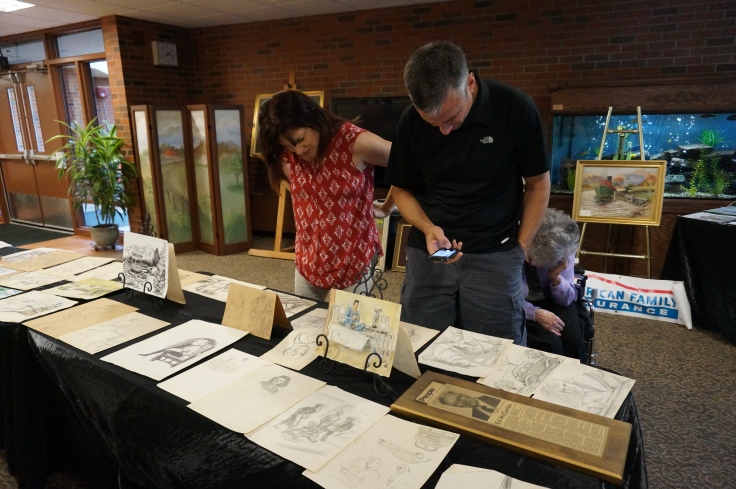 He painted quite a few abstracts 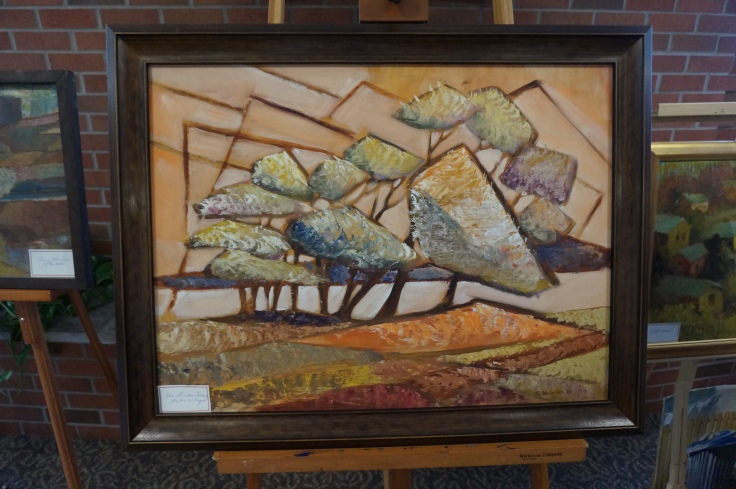 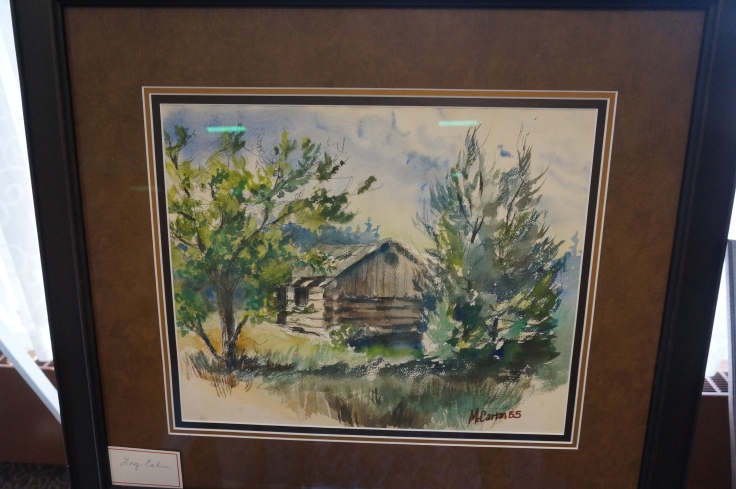 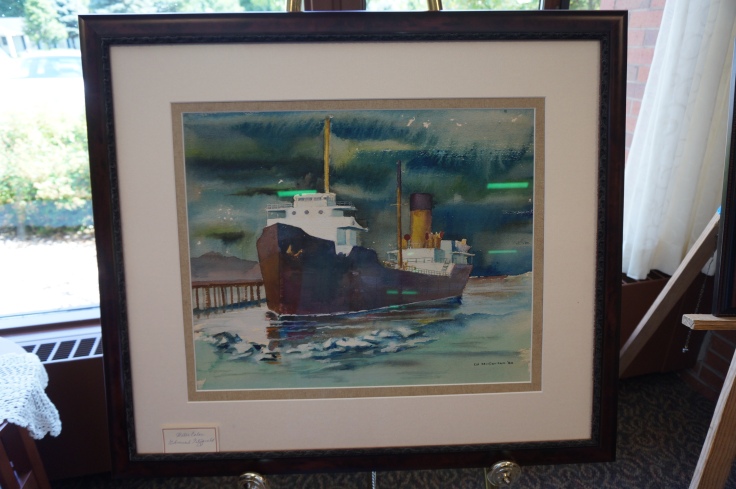 His drawings and watercolor sketches filled six tables. I only picked a few of them for the show. Somewhere there’s an album filled with the logos he designed under his own name, McCartan Advertising. 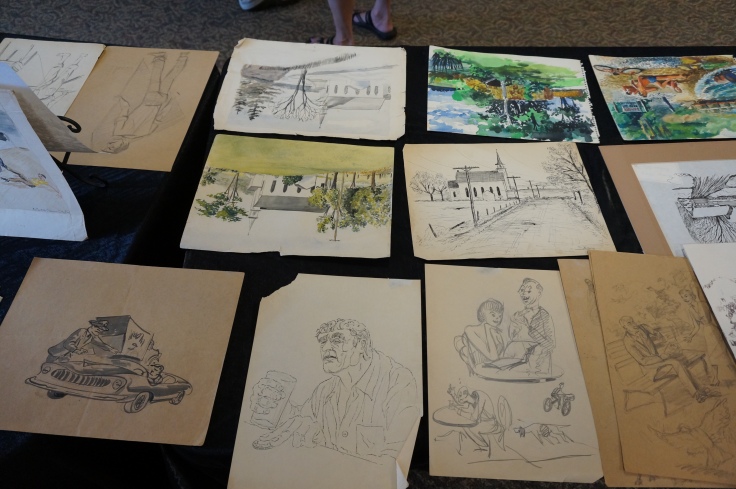 The ones he drew since having dementia are wonderfully distorted. 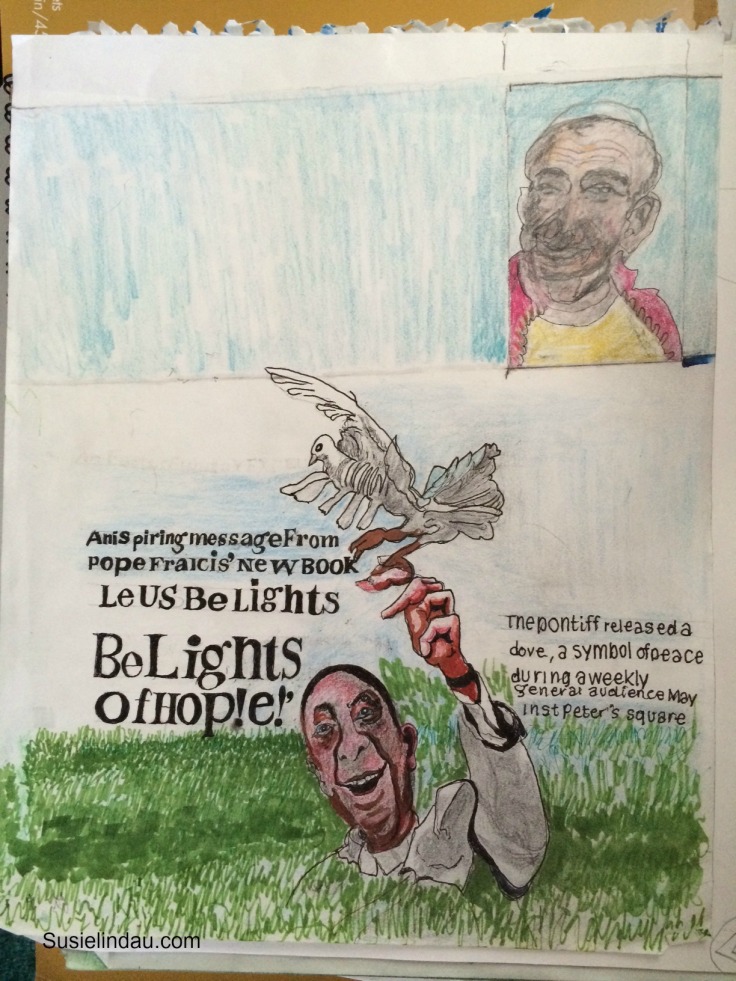 After growing up surrounded by art, it was amazing to see it all displayed. The next day, I discovered another stack of drawings and large watercolors in his office at home. Who knows what I might find in their attic?

That Monday, my parents celebrated their 58th Wedding Anniversary.

I know my sister, Patty, would have loved to have celebrated with us. Ah, the life of a working girl.

I’m so thankful to Mercy Hospice and Evansville Manor for hosting the event and for American Family Insurance representatives for stopping by. My dad, Ed McCartan, is truly a gifted artist and appreciates everyone’s effort.

I talked to my mom today. Dad is drawing again. Yay!

Do you have a hobby or life’s passion? Is there something you would love to learn how to do?