I have always wanted to shoot a moose… with my camera. They are huge animals which can be aggressive and dangerous. They are also majestic and fearless, qualities I have always admired.

A few years ago, I freaked out and fumbled with my phone as a cow and her calf pranced by the liftline in Breckenridge. By the time I pulled off my mittens to take the shot, they had dashed into the forest.

Last Friday night, Danny and I walked the Pearl Street in Boulder after dinner. We stopped in a shop and I overheard a conversation about a moose encounter. The man and his wife had dropped off their daughter at CU and then hiked Brainard Lake, about forty-five minutes away in the mountains.

“I want to see a moose,” I whined like a two-year-old.

He pulled out his phone and showed me the extraordinary photos of a bull moose whose antlers were in velvet. Can you imagine stumbling over them in the spring? Whoa…

I Jonesed for a moose encounter, but Danny planned to play golf on Saturday afternoon. He doesn’t doesn’t have the opportunity very often. He had a meeting on Sunday. Hiking would have to wait.

With rising temperatures Saturday morning along with smoke from Western fires, he hoped to finish some yard work in the morning while I hosted a Drop and Hop Party on my blog.

He cut his right hand with the hedge trimmer. I sent him to Urgent Care and then found out how it happened. I won’t laugh because the last time, this happened…

After four stitches (only a flesh wound between his index finger and thumb) he was told to skip tennis and golf for the next ten days.

Now the afternoon was WIDE OPEN!

“You want to hike Brainard Lake?” he asked.

“Yes!” I abandoned my party. We packed water and snacks in one backpack and then stuffed jackets into another. We drove up Lefthand Canyon.

Like we had expected, the temperature was in the low 70’s. There were others hiking, but it wasn’t crowded like Rocky Mountain National Park. That place is a zoo in the summer.

We hiked on a trail through the aspen and evergreen forest up a thousand feet to another small lake in the high alpine environment. 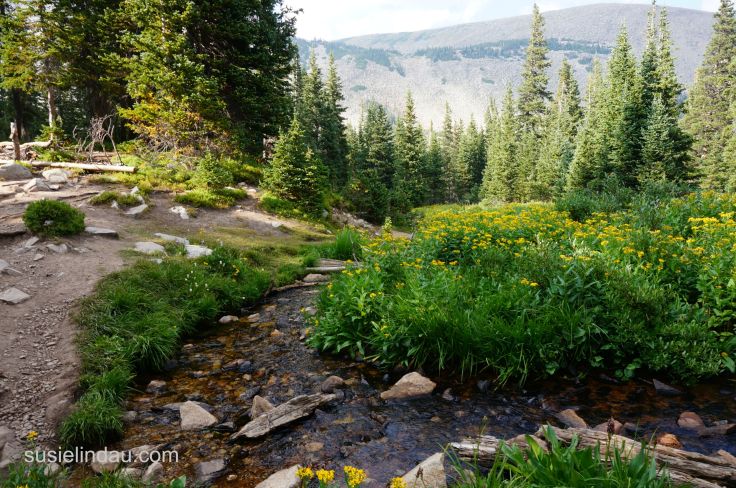 It was ablaze with wildflowers.

We avoided loud conversationalists and listened for breaking branches. A dude with a boom box passed us with his posse. Okay. This is a wilderness area and the third time this year someone has blared music while hiking. What are they thinking?

I had to say something this time.

“Dude. Although I appreciate that your music is turned down to a reasonable level, this is a place where people go for peace and quiet. You should turn it off.”

The group kept walking. He yelled something back at me. I think he said, “Thanks! Have a nice day.” Pshh.

The temperature dropped and the wind picked up. I didn’t want to get caught in a storm. It was hard to tell what kind of weather was afoot with all the smoke. We turned around.

Most people had headed home before us. Dusk approached sooner with the height of the mountains blocking the sun. 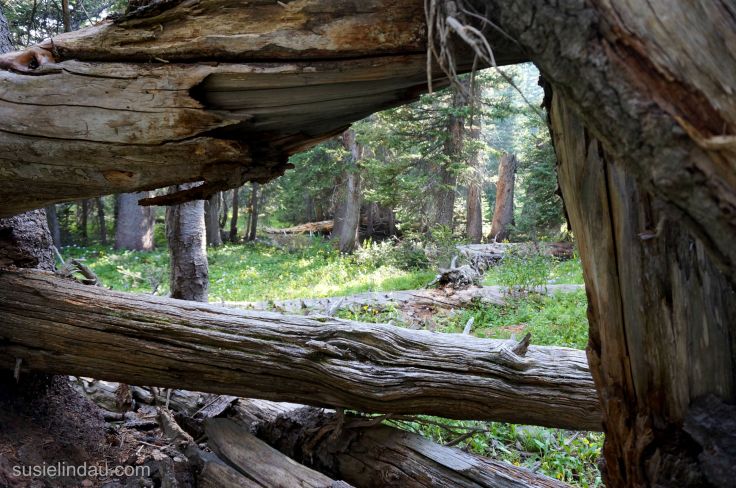 Then I heard it. The snap of a branch. Then another.

It was a cow and her calf. This time, I didn’t freak. I took a few pictures, but they spotted us and headed in the other direction.

Do you see her? 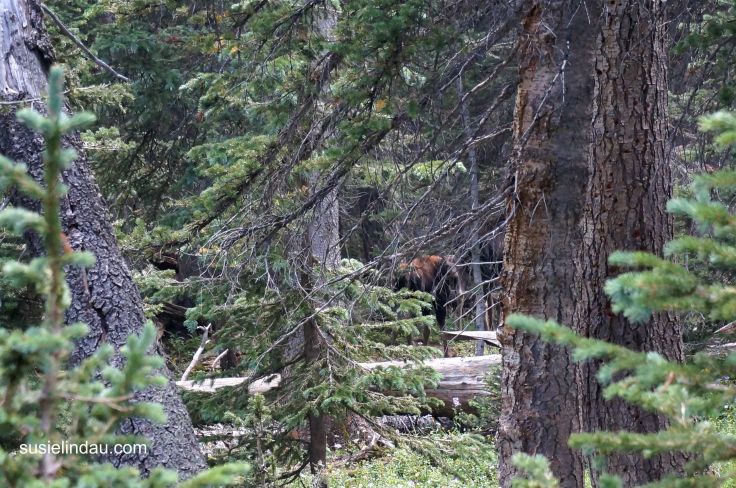 How about now? Do you see the calf’s legs 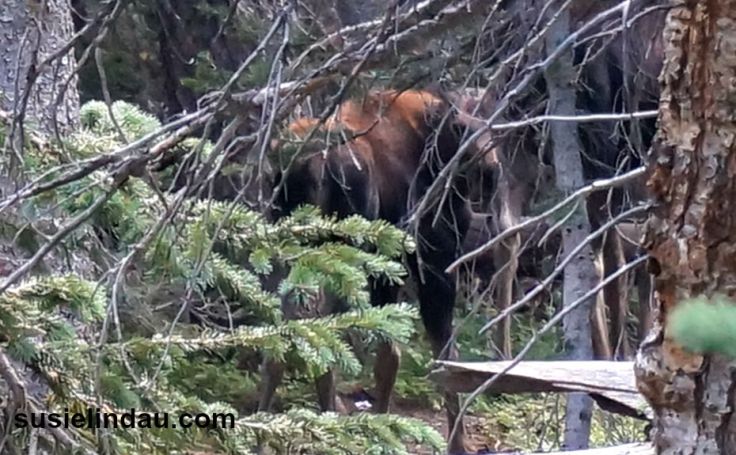 I was so excited to get a shot of a moose. I didn’t fumble this time.

While walking back to the parking lot, we took a wrong turn. Look who we ran into? Yes. A bull moose muncher. 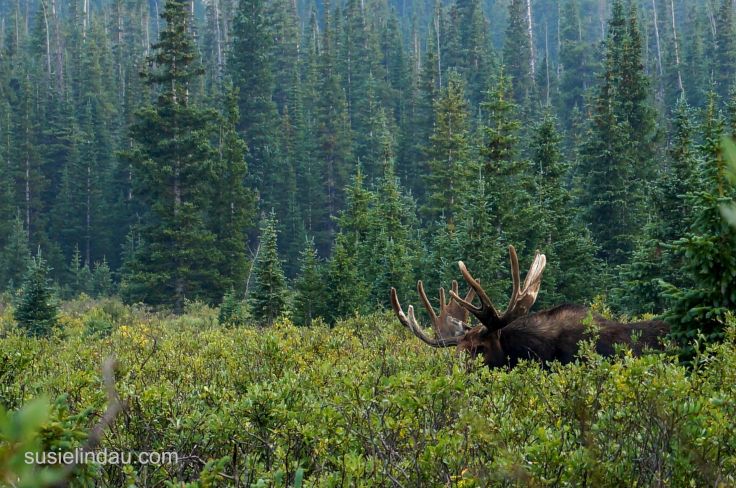 I snapped pictures until my fingers became numb. It had dropped twenty degrees in the three hours we hiked.

There were several photographers, a young family and hikers who stopped to admire this amazing creature. He never lifted his head. The moose lived up to its reputation of being majestic and fearless. Everyone gave him his space, so his other known qualities weren’t challenged. Whew.

What started out as a setback ended in a very good day.

This is a response to the Weekly Photo Challenge.