Create a few cliffhangers in your life and jump! Sometimes you’ll crash and burn but it’s the only way to reach your goals. Read more to find out how.

Lured by the rush of adrenaline and weightlessness, Hank Caylor and his friend planned to jump. They entered the revolving door of the Embassy Suites Hotel, slipped past security and the front desk. The two-story escalator took them to the mezzanine. They dashed to the elevator. After riding up to the 38th floor, they made their way to the roof and climbed onto the ledge. With less than 400 feet and mere seconds from the impact of concrete, there was no room for error. BASE jumping is illegal in Denver. They had been warned.

Hank and his friend dropped their gaze to the street below. While timing the traffic lights, so they wouldn’t get hit by a car or truck, the wind picked up.

Hank hesitated. His friend jumped. His parachute opened and he landed on the street. Crowds formed.

The longer Hank waited, the higher the risk that someone would run inside the hotel to tell security. They would call the cops. Security could be on their way to the roof already. He didn’t want to get busted.

At first he sailed down in a free fall, hands and legs splayed out. The rush of air whipped through his hair, stung his eyes and screamed in his ears. As he dropped, he pulled the ripcord of his parachute. But a sudden burst of wind blasted between the skyscrapers. 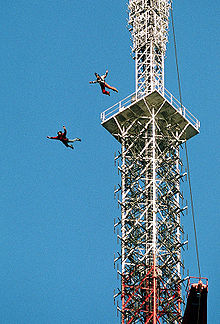 It spun him around. Instead of floating to the street, the gust slammed him into the side of the building. His body smashed through a plate glass window on the 21st floor.

My heart pounded while Hank Caylor told me his story. I met him while he worked as an electrician in our home in 2000. He was recovering from that infamous BASE jump. Ironically, my husband and I lived on the 35th floor of the apartments at The Embassy Suites Hotel for two years when we were first married. I could picture everything.

I knew Hank survived, he stood right in front of me, but I hung on his words like I clung to the building beside him. It was the ultimate cliffhanger. Hundreds of stitches, jail time, and an acquitted lawsuit weren’t a part of his plan, but at least he took a chance. He didn’t wimp out.

So what does this have to do with you? Why should you jump?

You need to create cliffhangers in your life in order to challenge yourself.

Attaining a new goal can be exhilarating and can take you to a whole new level in life’s journey, but you have to be willing to take the leap and risk crashing in failure.

My son applied to an exclusive music production school. It required a detailed application, a Skype interview, submitting original music, and answering personal essay questions. He created a cliffhanger. While we waited to hear if he’d been accepted, he flew out to Los Angeles and took a tour. Impressed with the direction of the school and its graduates, the pressure to get in increased ten-fold. We all sat on the edge of our collective seats. Last Tuesday, he received an email. It contained a fantastic acceptance letter saying he had the talent they were looking for. Go Kelly!

My daughter works in digital marketing, but has always been physically active. She participated in ballet, high school pom-pom, and CU’s Dance Team for half-time shows at football games. Now that she is working full-time, she goes to the gym on a regular basis and calls herself a “gym rat.” She is taking an intensive course to become a personal trainer to supplement her income. She created a cliffhanger. So far she’s passing with flying colors. Go Courtney!

Both of them have climbed up on the ledge, looked down and then jumped.

I can’t wait to see where they land in the next year or two. I sit on the edge of my seat and watch.

I’ve taken a huge risk in investing thousands of hours writing for this blog and my books. Now I am taking a leap in querying agents. Every day I check my email for responses. The rejections aren’t as painful as smashing through the plate glass window of a building, but they can be gut-punching setbacks.

Use failure as a way to improve.

I’ve received feedback in several rejections and my manuscript has been out on submission. Instead of giving up to self-publish, I’ve taken the constructive criticism, worked on my technique, and repacked my parachute. If I end up self-publishing anyway, I won’t look back and regret the querying process. The professional critique has hugely impacted my manuscript and it’s been free advice by top professionals.

I want my book to be the best it can be. I’m not in a big hurry to publish. It’s worth the extra time.

Regardless of how it is published, someday I’ll face public reviews of my work. Talk about nerve-wracking while looking down at tiny traffic lights as turbulent wind pummels my face. I expect that no matter how much I revise and improve it, my book will be panned by someone.

Cliffhangers are a way of life.

Will I score an agent? Be traditionally published? Will my words find ten readers or ten thousand? Who knows?

The only way to find out is to climb out on that ledge and jump.

By the way, ElSalvador.com posted a video of Hank and two friends skydiving from a hot air balloon a few day ago. Go Hank!

Do you take the safe route in attaining goals or do you jump off the ledge?

76 thoughts on “Create cliffhangers in your life and JUMP!”