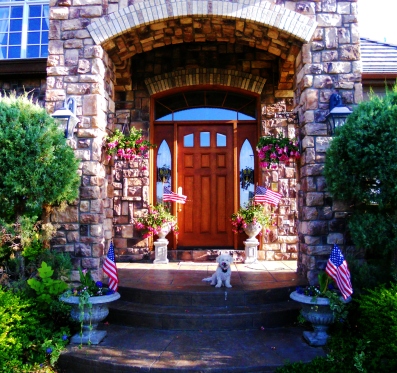 Usually, I’m totally psyched about America’s Birthday. I’ve always looked forward to the 4th of July, but this year something is lurking in the back of my mind.

I am very afraid.

It all started a few weeks ago. I had an earworm. That’s not unusual. Many of us have experienced a song that got stuck in our heads, sometimes lasting for days on end.

You wake up and it starts. Later that morning, you hum the tune while in the car. The same song pops into your mind while taking a shower and at that point you may sing along.

Days later, the earworm becomes obnoxious. It torments you.  Attached like a shadow, it won’t let go. It makes itself at home. It finds a fold of gray matter, dons its headphones and tunes into one song. It smiles and stretches out. Then it does the unthinkable. That dang worm presses, REPEAT.

Most earworms don’t bother me. I’ve had old church hymns stick in my craw even though I hadn’t heard these particular songs for years.

I have no idea why this particular song stuck in my small cranium, but it did. Maybe I heard it sung during the NBA playoffs or the beginning of a Rockies game while flipping through channels. I don’t remember.

The Star Spangled Banner became my earworm. No lie.

It became so ridiculous, I started singing the goofy lyrics we made up when kids to make it more fun.

I know! While on our Epic Road Trip, I tuned into Pandora’s pop music list and it finally disappeared. Whew!

Now it’s the Fourth of July. I’ll actually hear it sung several times today. The thought of it seeping back into the dark folds of gray matter and stretching out like a parasitic house guest, makes me cringe.

It’s not that I don’t like the song, but I’ve probably heard it in my head a hundred times in the last few weeks. I’m over it.

I’m not sure how I’ll cover my ears and my heart at the same time. I might bring noise-canceling headphones.

Happy Birthday, America! I hope you all have a safe holiday. Cover your ears, just in case.

What was your worst earworm? How did you get rid of it?

62 thoughts on “Fear of Earworms on America’s Birthday”