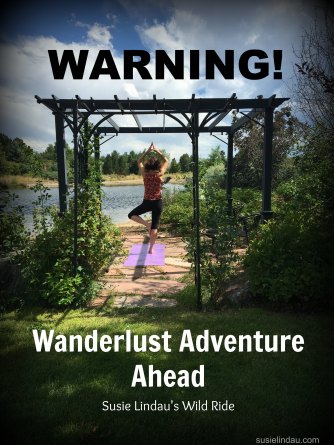 When my daughter, Courtney, asked if I’d be interested in going to Wanderlust, I said, “Sure!” I’m always up for traveling, but had no idea what she was talking about. Last week, she sent me a video of a class we’ll be taking. I laughed until I cried.

I hope no one gets hurt…

Wanderlust – Whistler 2016, is a four-day yoga festival that includes everything from the obvious, (yoga) and meditation to paddle-boarding, hiking and rocking out to DJs at night. I signed up. After all this isn’t my first yoga rodeo.

In seventh grade, I took a class as an elective at Our Lady Queen of Peace. I was hooked. I loved the relaxed atmosphere and how it slowed my active mind. I continued my interest through college. For a few years after having kids, I took a class poolside at a beautifully landscaped Boulder home. When the sessions became more aerobic than meditative, I dropped out.

It has been a few years since I’ve really been into yoga. With wrist and knee issues, I recently attended a few classes in Boulder to test my body. With a pad under my knees, I could do everything, in restorative, gentle yoga, anyway.

I thought I was good to go.

Courtney instructed me to sign up for all of the classes on her schedule, so I blindly clicked away. Last week, she sent me an email and asked if I had read the class descriptions. Of course not. I rarely read instructions.

One of the classes we’re taking is Acrovinyasa. She sent this video and I laughed until I cried.

We’ll be partners. I assume I’ll be on the bottom. I just watched the video again and it still cracks me up. Think of me spinning around like a top next Thursday. Ha! Still laughing.

My husband, Danny, is coming with us. His yoga themed bad dad jokes have been hitting me in waves. He is running two 5Ks as part of the event and will go on a hike, but he also signed up for a couple of yoga classes. There is hope. I think I’ll buy him that guy’s bandana. Could be a good look for him since he’s planning on walking around town with a cross-body yoga mat and a water bottle. Ha!

I’m really looking forward to the classes, especially the ones involving positivity and opening up the mind to creativity. I truly believe writers, musicians, and artists get into a creative flow that seems to come out of nowhere. It’s why I write with a vague idea of my plot points and could never use an outline. Whenever I concretely think about what should happen next in my book, I go into “deer in the headlights.” Instead, I imagine the characters and setting, and the scene rolls in my head like a movie.

Wanderlust should be a mind bender. I hope my body bends too. I can’t afford any breakage.

Don’t worry, Courtney and Danny will take lots of pictures. Remember, I have no shame.

Are you into yoga? Have you been to Whistler or Vancouver? Is Acroyoga for you?

81 thoughts on “Warning! Wanderlust Adventure Ahead”