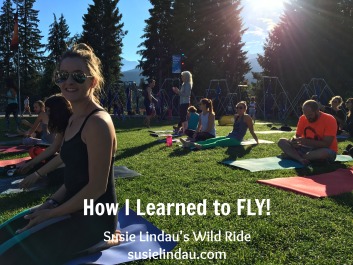 I learned how to fly. I let go. I trusted. I flew by being, not doing.

Yesterday, I returned from Wanderlust Yoga Festival in a peaceful state of bliss, feeling renewed, refreshed and very sore. From meditation to slack lining, this four day adventure blew my mind.

I had worried about my first class, acroyoga, mentioned in my last blog post. As I sat among sixty others waiting to become fliers, I wondered how my mending body would perform. Partial knee and broken wrist notwithstanding, I hoped I had the strength. I wasn’t worried about my own body crashing as much as face planting someone else. My mind jumped from doubt to regret that I hadn’t worked out enough. I worried my body wasn’t strong enough. That I wasn’t enough. As I sat under blue skies with the breathtaking mountains in the backdrop, my heart raced and my palms perspired.

Our instructor said we couldn’t fly without one, three letter word. Yet. We couldn’t fly, yet. He said we would all fly by the end of the class.

No way, I thought.

How did we practice? Through grounding trust exercises. We would have partners and had to learn to let go.

Looking back, this was the perfect class to start the festival.

So much of the festival was about letting go. Letting go of the same negative thoughts. Letting go of old wounds. Freeing our minds to create space for new thoughts to grow. Learning to listen so we could trust our soul to guide us along the way.

Did I fly? In many ways, yes, I did. Old wounds both mental and physical reopened, so they could be released.

Was is painful? Yes! I was close to tears for three days. On the fourth, I felt stronger, lighter, happier. When I came to Whistler, I had planned to solve problems by doing. When I left, I had made a decision. Being and letting life happen was enough. My body was enough. I was enough. 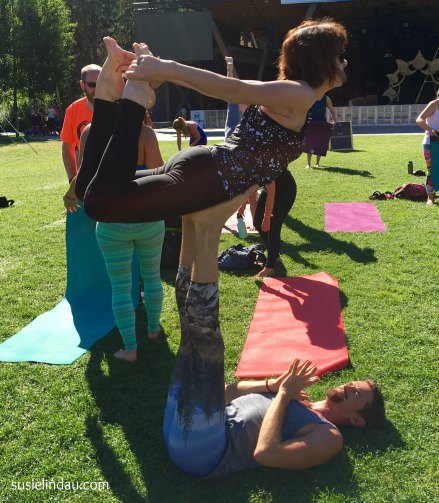 Have you ever gone on an adventure that changed you in some way? Would you consider going to Wanderlust? Do you want to open your mind to new ideas?