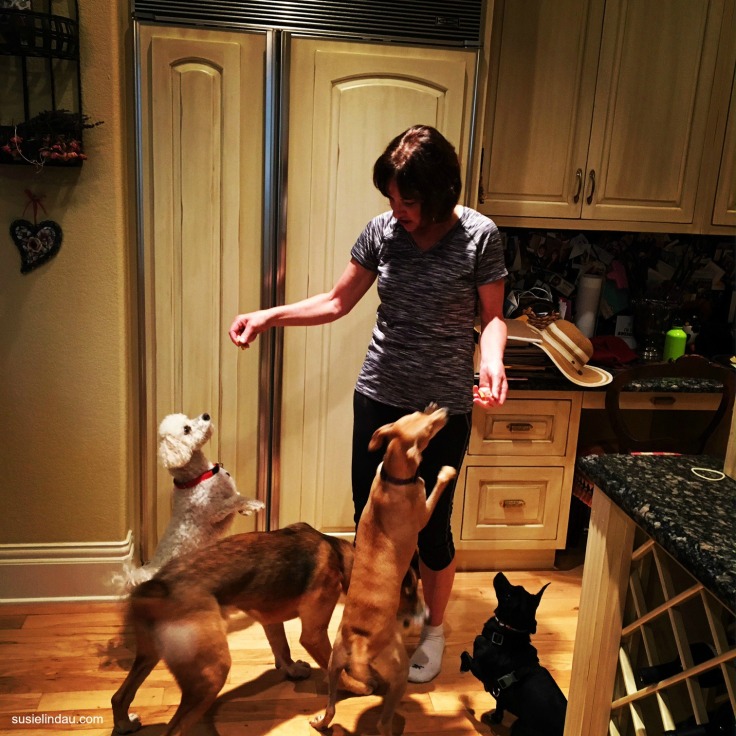 My husband, Danny, and I watched the Dog Whisperer on TV last Saturday. An aggressive Ridgeback named George needed to learn submissive behavior. When leashed, he disobeyed his owners and picked up rocks along the trail.

So the dog picks up a rock and that’s a terrible thing because… I sipped my coffee and half-listened while skimming the newspaper.

My ears perked up. That sounded a lot like human behavior.

Caesar planned to introduce George to a huge pack of similar size dogs including Rottweilers and Pit Bulls. He mentioned if he didn’t show control over George when introduced to the pack, the Ridgeback would be attacked and torn apart.

Well, that seemed risky. More than twenty humongous dogs circled Caesar and poor George inside the enclosure, but I trusted Caesar. *gulp*

Caesar unsnapped George’s leash and the dog’s tail and ears descended. George snarled. Caesar sprang to action and cornered George. He commanded him to lay down. He never touched the dog or praised it.

When George showed calm behavior, ears and tail up, he was allowed to check out the group. The pack took turns sniffing the new dog in all the best smelly dog places. Accepted, the Ridgeback had a wild romp with others in the pack.

Later, Caesar introduced rocks to George. The Ridgeback looked at him like, why would I want to play with those stupid things when I have all these fine canine friends?”

Reunited with his owners, George walked down a rocky trail and ignored rocks and other dogs. His owners couldn’t believe the dog’s transformation.

Credits rolled at the end of the show.

ME: Wow! Did you see that? One minute he was freaking out and the next, the dog was having a blast. He just needed to know Caesar was in control.

DANNY: I need a Susie Whisperer.

ME: I have one. They’re called writers conferences. *wags tail*

33 thoughts on “Need a Susie Whisperer? Random Acts of Chat”