Last Friday, I shared the same small coffee shop with Ashton Kutcher and Mila Kunis,  and had a mind blown moment. Not because they’re celebrities. I’ve seen a ton of them over the years. And I don’t count those I pay to see. I do count the night at Mr. Chow when Sir Elton John held court at a table filled with beautiful men. The same night, Billy Bush stopped at our table to talk to my daughter and her friend. They had run into him on the way to the ladies’ room. Benicio Del Toro, Cybill Shepherd, Emily Blunt, Billy Idol… Trust me. It’s a long list.

I believe in The Secret. For those of you who aren’t aware, it’s a bestselling book about the power of positive thinking and the law of attraction. I’ve always felt like I’m that person. Lucky. The fact that my husband, Danny, and I got together is pure luck times ten. When I read The Secret several years ago, I tried it out. It asked the reader to imagine something cool happening and live like it already happened. I finished the book on our way to a resort in Costa Rica. I imagined running into a celebrity. Once we arrived, I realized how stupid that was. It was filled with families and everyone spoke Spanish. If there were celebrities at the resort, they would be lost on me. I don’t watch Telemundo.

After a long day of traveling, my husband and kids checked out the ocean. I sank into a recliner near the pool. A young man and woman walked past. He noticed my mesh bag. “Are you reading The Secret?”

“I just finished it.”

“Here.” He took out his ear buds and handed me his iPod. “I’m listening to it right now. We’re going to get something to eat. I’ll stop back in a little while.”

I listened to his iPod until he came back. He and his girlfriend sat down and we became acquainted with the whole, “Where are you from? What do you do?” kind of questions. Wait for it….

He was a freakin’ actor from Vancouver. NO LIE! He had just finished a series for the History Channel.

Flash forward over the next few years. I won EVERYTHING including a heli-ski trip in Canada and every raffle I entered. One time I bought an extra ticket for a friend and said, “Don’t worry. You’ll win.” We both won.

Then I came down with breast cancer three and a-half years ago. My luck had run out. I stopped winning. I worked really hard at positivity, but it was tough. I felt screwed over. I carried a weight of anxiety in my gut only released for a while between estrogen suppressants, (what my cancer ate) and for a week after the Wanderlust Yoga Festival last summer.

I turned a corner in January. I began meditating and the anxiety disappeared. For the first time in a long while, I looked forward to events. A happy feeling replaced the weight in my gut.

So what does this have to do with the Kutcher family?

The week before my trip to Burbank, California to visit my son, Kelly, I watched the movie Friends with Benefits starring Mila Kunis and remembered The Secret. I put the intention I would love to see Mila Kunis and Ashton Kutcher, into the Universe. I figured visualizing specific people might help. I also visualized Tim Ferriss of The 4-Hour Work Week fame. I’m a new fangirl.

I borrowed Kelly’s car for the weekend and planned to take it in for an oil change before heading to Malibu on Saturday. While driving to a coffee shop on Friday morning, I vibed out. I had to get the oil change now. On my way to a Jiffy Lube, I discovered a Valvoline with open bays. Bonus! I pulled in and checked it off my list.

Knowing Kelly had worked on music until the wee hours of the morning, I let him sleep in. With that same strong vibe, I changed direction and headed to a coffee shop back near my VRBO in Burbank. I had gone to a cute one the day before, but I wasn’t feeling it.

When I walked in, I was glad to see that although it was small there were several places to sit and hang out. A couple of bars with swivel chairs stood perpendicular to where you ordered, and bench seats and tables were scattered throughout. It was bright and I considered wearing my sunglasses, but slipped them into my purse. I cued up behind a few others to place an order for a $5.00 cup of joe and a lady with curly brown hair lined up behind me.

From where I stood, I could see the door. In walked Ashton Kutcher. The Ashton Kutcher from my intention the week before! I just about dropped over. My heart slammed in my chest. He wore a baseball cap, a puffer jacket, (it was a bitter 58 degrees for Los Angelians) and jeans. I couldn’t help but stare. He knew, I knew who he was. His intense brown eyes glinted like, Don’t even and then quickly looked away while conversing with the lady behind me. I assume I smiled like an idiot or a kid on Christmas morning.

That’s the funny thing. I never ask for autographs or for photos and don’t talk to celebrities unless they hold eye contact, smile back, and say hello. Even then, I test the water with a, “Hi, how are yah?” If they answer, I might continue depending on the situation. By the way, he has amazing lips. I could see why Mila crushed on Ashton since starring opposite him on That 70’s Show.

The lady behind me gave Kutcher some estimates, but music blaring from overhead speakers drowned out his voice. I strained, but couldn’t hear much of anything. It’s probably why they chose that particular place. “Mind your own beeswax,” my deceased grandmother would have said.

I took a seat at the bar so I could watch Kutcher order and hoped they would sit nearby. The contractor chose a seat next to me. Whoa. Ashton walked toward me after ordering. I could have easily taken a great photograph, but just couldn’t. Not one person hassled him the whole time he was in that coffee shop although I suspect the Asian guy sitting on the end of the bar got some great photos.

I immediately texted my family and they begged for pictures. I took a subtle shot when he ordered breakfast. Then the contractor shuffled her binder and folders on the bar and slid closer to me.

“Maybe. Someone is joining us with a stroller.”

Holy mother of God! Mila Kunis and their new baby????

I slid as far down as I could and texted my family the update.

I started writing this post when I sensed someone staring at me. I looked up. “Oh, hi,” I said.

Mila Kunis stood at my right elbow and carried baby Kutcher in a car seat. I couldn’t believe it. She flashed her gorgeous eyes over me and smiled. Then to my dismay, they moved to the back corner right in the window of the coffee shop to continue their conversation.

Mila walked to the line for coffee. She wore jeans, a cute gray sweater, and fancy-like tennis shoes. Tennis shoes are a big thing in LA right now.

I was impressed that both Ashton and Mila waited in line like regular people. They didn’t pull the, “Hey, I’m a celebrity, so I’m not waiting,” card. Nor did the contractor offer to wait for them. Cool.

Again, I could’ve gotten a straight up shot of Mila walking right toward me, but took a subtle photo of her ordering instead. 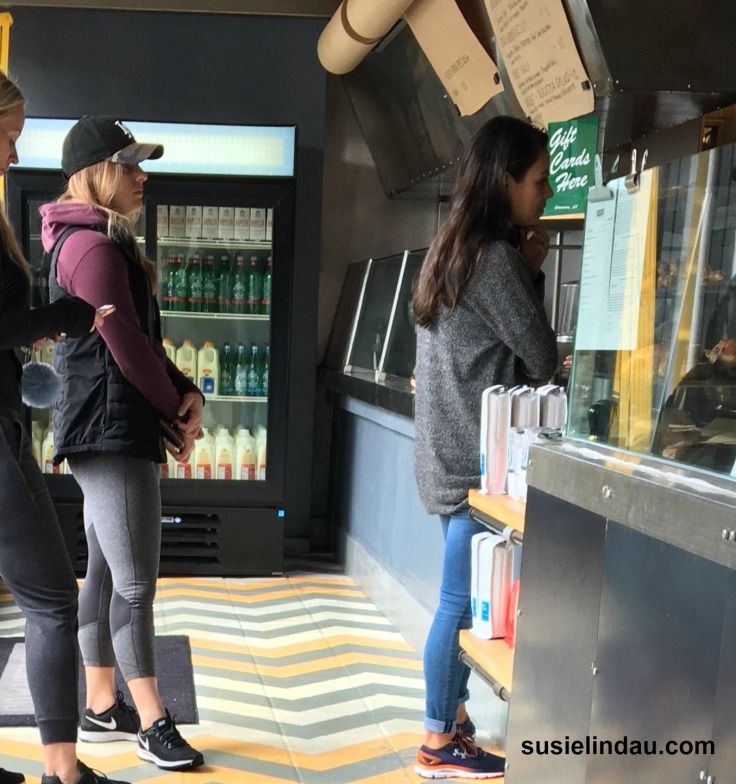 I picked up Kelly so we could order breakfast and we returned right when Ashton left. Mila still sat in the corner with the contractor.

If they would’ve worn sunglasses, I might not have recognized them. They didn’t seem to care. They didn’t engage with me at all although their contractor was friendly. They chose a public place for their meeting and took a chance on paparazzi.

Good on them for living their lives! I can’t imagine having to hunker down all the time and stay out of the public eye. I’ve had some mistaken identity moments and the attention can be awkward. Watch for another post about that. Crazy.

Ashton Kutcher and Mila Kunis remind me of Danny and me. I have a feeling this couple will last. I obviously trust my feelings. I crushed on Danny when I was in the 8th grade, but he was four years ahead of me. Our families went to a Brewer game on Memorial Day in 1987 when he was in Wisconsin for the weekend. He rarely came back from Colorado to visit. I flew out for the Telluride Bluegrass Festival in June and we booked the priest and the Church over the 4th of July. Truth. Check out this post.

The biggest takeaway? The Secret works when you believe in it. I had felt down and kicked in the gut until a few weeks ago. Seeing them after that crazy ass intention, blew my mind. After all my setbacks, I’m back. Thank you Kutcher family for being so amazing and setting me back on track.

By the way, don’t bother entering any contests. I’ll win.

Have you seen any celebrities? Who would you like to meet?

Other crazy stories that could only happen to me:

Our Secret is Out!