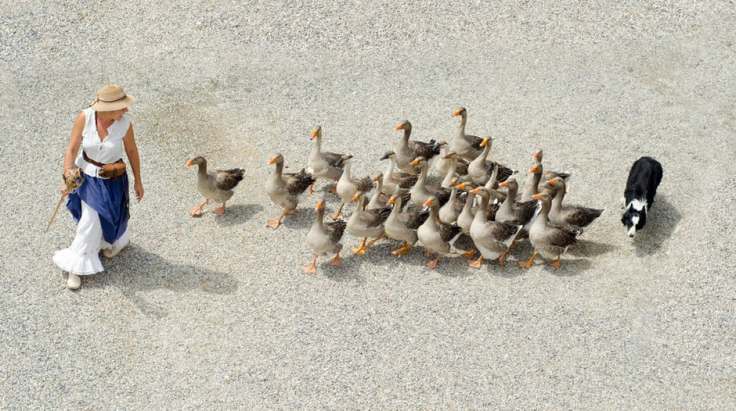 Doesn’t it always seem when you get your proverbial ducklings to trot single file, Destiny senses your achievement and watches like a lurking bully? Just as you hit your stride it jumps from the bushes and scatters them. Yup. Big D loves to mess with us. We can’t predict what life has in store for us, EVER!

“You think you’re in control of things? Ha!” says Big D, “You crack me up, Susie Lindau.” Destiny always has other plans in order to teach us life lessons.

This was the year I wanted to hunker down to finish projects, enter contests and get into super shape. Most important to me was to start a regular routine to balance my life and accomplish more in less time. Destiny buckled over it laughed so hard.

When my brother, Joe, died in March, shock pulled more than five weeks from my stellar equation to reach 2017’s goals. During that time I shelved most of my writing, but made some positive changes. I write in a gratitude journal every night and refocused my goals after finally learning about the fragility of life. You’d think breast cancer would have taught me that.

Destiny crosses its arms and shakes its head.

But Destiny also taught me to take opportunities presented NOW. I won’t wait for a better time in the future. You never know what’s ahead. Since adventure’s my thing, I decided I wanted to travel a lot more, but I wasn’t sure how I would balance that with hunkering down. I figured once things settled down after the funeral, I could get a ton done and plan an adventure sometime next fall. Ha! In hindsight, Destiny and I both share a laugh over that naive thought.

My husband and I returned home between Joe’s death and the funeral and discovered water pouring through the ceiling of our house from my demon washing machine. I took it as a cosmic joke and cliché moment about how life goes on and most of the setbacks are fixable. I figured we would patch up the ceiling and move on.

“Gotcha, Destiny.” I clucked my tongue and winked.

Big D shook its head. It had other plans.

So we’ve been inundated with workers since March 14th. Driers, contractors, drywallers, painters and soon the wood floors will be redone. My routine has been blown to hell. Instead, I carve out a few hours each day while workers come and go.

Then we heard from our insurance company. Are you sitting down? Because the water leaked out of the room into the hall, ALL of the wood floors on our first floor will be refinished along with my son’s room. The furniture has to be moved out. I threw up my hands and shook my fist at the Destiny. “Quit screwing with us, Destiny!”

My stomach has been knotted while waiting to get back to a normal life.

Then I discovered we need to move out of the house for almost THREE WEEKS! Another setback. We planned to drive to Breckenridge and stay at our second home. That’s cool, I guess.

One night, we picked up where we left off with Outlander. I had been so inspired when we started watching the historical fantasy about a woman who travels back in time to the 1740’s. My 100% Irish dad shocked us a few years ago when he said he had a Scottish grandmother. I did some research and she immigrated to America from the Melville Castle area. I wondered if my love for fish tropical in tanks and of the edible variety had anything to do with a connection to Herman?

“Wait a minute,” I said to my husband, Danny, after turning off a gruesome episode where a duke becomes headless, “See if there’s anything available in Scotland!” We bought a dinky timeshare unit in a lodge at the bottom of Peak 7 in Breck to use the amenities and park our car. We always forget to trade it and are about to lose two weeks.

After Danny researched availability, he came out of his office, smiling. “There’s a place in Dailly, Scotland.”

“What?” my eyebrows rose to my hairline and I took a look at his computer. We couldn’t find a trade in the US. It must be destiny.

A small smile curled in the corners of The Big D’s mouth as it peered over my shoulder.

That weekend, I caught up with a few blogs before skiing. Sacha Black announced the Bloggers Bash in London. One of our goals is to travel around and meet my virtual friends. “We could meet my friends!” I said.

I bought two tickets to the Bash and Danny booked our stay in Scotland for a week. We still needed to book the second week.

Why don’t we go to Paris the second week?”

“We can go anywhere, but that’s your favorite place, right?”

I would let it sink in over the weekend.

I attended the Pikes Peak Writers Conference and had several mind blown moments thanks to Donald Maass and several other knowledgeable writers. Between classes, I spoke to my son, Kelly. “If you want to visit me this quarter, you should come out next weekend,” he said. “I have to work hard the last few weeks of school.” He’s attending Icon Collective Music Production School in Burbank. He graduates in June.

I LOVE visiting Kelly in California, but I would come home late Sunday evening and would have to repack to fly out again. Thing is, my mom comes for a ten day visit over Mother’s Day. Would I ever have time to do revisions after those mind blown moments? I remembered my new thoughts about opportunity and booked flights for early Friday morning. With the pressure of a trip, I wrote a brand new, much better first chapter and revised the second. Maybe cramming in writing between workers coming to the house was a good thing.

Monday morning I checked AirBnB’s in Paris surprised at how many lovely apartments near the heart of Paris only cost around $100 per night. I made a list of favorites. Then I noticed the walls in the Parisian apartment photos. I needed to pick a color for the bathroom that had been damaged. Most of the French rooms depicted neutrals in gray, taupe and tans. We have a very French house and I was sick of the green paint in the bathroom.

I drove to the paint store and picked out a few colors, then asked the decorator, “Is gray still a popular color?”

“It is,” she said, brown curls bouncing as she walked toward me from her desk.

“I was thinking about warm gray,” I said. “Something with a little brown in it.”

She pulled a few colors from a new line of paint. They all looked pretty much alike. When I returned home with a fist full of paint chips, I selected a taupey color called “Quicksand” and called the painter.

Destiny chuckled in the background.

I didn’t pay attention to its giggle.

Another cosmic joke came the next day. The house filled with painters. They spent the day painting the guest bedroom and the adjacent back sink area and bathroom.

After they left, I checked out the rooms. “Are you kidding me???” The walls were a light shade of green. It made the tumbled marble tile look pink. I screamed. “No!” Then I checked the code for the paint on the chip against the can. Exactly the same. How? How?

I figured this had to happen to other people and spoke the contractor. Nope. This NEVER happens.

At this rate, workers will be around for a while. I predict a lot of travel in my future. Quit scattering my ducks, Destiny!

When Death Sits on My Face

88 thoughts on “When Destiny Packs Your Bags”