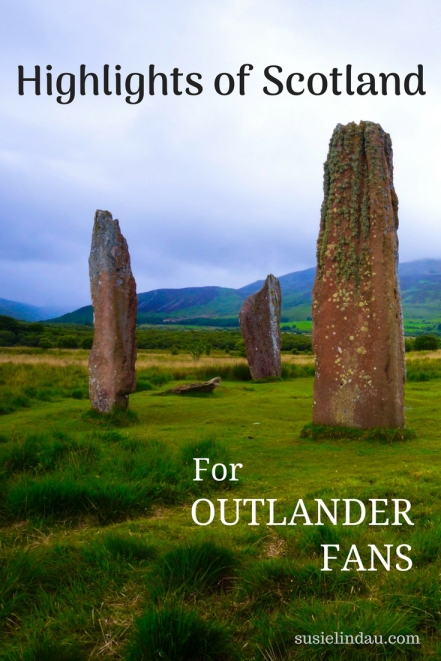 We drove from Perth, Scotland to the Culloden House right outside Inverness.

This is where Bonnie Prince Charlie Edward Stuart hatched his plans for the last Jacobite battle against the English. Inside the stately manor, filled with antiques, I could imagine heads of state colluding over tea in the day room while others took their Scottish breakfast across the way.

My husband, Danny, brought Outlander to read during our monthlong vacation. We watched two seasons of the show on Starz and can’t wait for the third this fall. The castles, lush and verdant landscapes, and history presented in the show were a big part of why we traveled to Scotland. We learned through meeting Fergus and Sarah Jane, Diana Gabaldon, writer of the popular series, had stayed at Culloden House two weeks earlier. Dang! Just missed her. I plan to meet her at a writers conference in the fall. 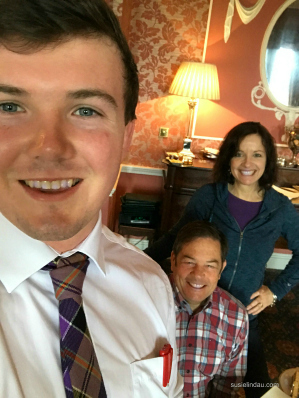 If you ever get a chance to visit, make sure to stroll through Culloden’s walled gardens. Simply breathtaking. 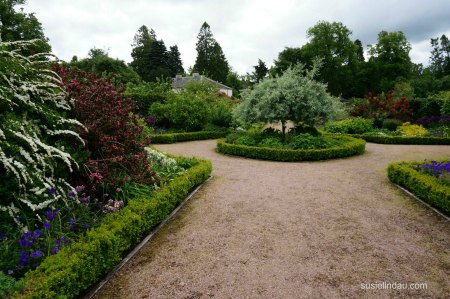 Loch Ness was only minutes away from Inverness by car.

A long finger of a waterway, the waves rippled in greeting. I half expected a dragon-like head to appear on its choppy surface.

Believe me, I searched for Nessie on behalf of all of you. I captured a video too. Stay tuned for my Loch Ness Encounter… What is the shadow under the water? 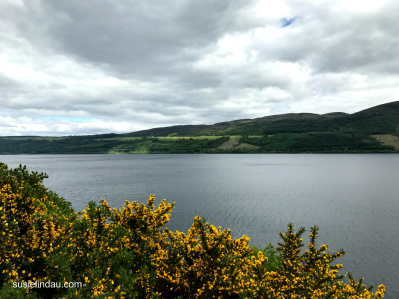 My blogging friend, Barb Taub invited us to visit her on Arran Island. We responded with a resounding YES! I figured we could stay overnight in Oban before meeting her the next day.

While we continued down the western side of Scotland, Danny asked me how far it was from Oban to the Ardrossan Ferry.

I sat in the passenger seat mesmerized by the scenery.

“I’ll check when we get there,” I said and dreamily stared outside at the thick forest on the west side of the road, noticing the vivid contrast of the treeless green highlands only yards away to the east.

I thought I picked a point right outside Adrossan. Not so. It was a three-hour tactical error. Oopsy. We would have to get up early to make the island ferry.

Our luck returned and we found a lovely hotel and booked their last room; the luxury suite. I was super excited until I stepped inside. The last time they decorated must have been in the 1930’s. But after a long day of sightseeing, I was thankful for the sagging antique furniture and slept like the rock that could describe the firmness of the bed.

We met Robert Downey Jr’s doppelgänger; a great bartender and host. I could never tire of that Scottish brogue. Danny found a photo of Colorado Highlanders in the hall. Ironic!

The next morning, we drove to Adrossan. With all the winding roads, it took us a little longer to get to the ferry than expected, but we made it with time to spare. Whew!

We docked on Arran Island and walked down the pier. Barb Taub and I greeted each other like old friends. I’ve known her through blogging for several years now. When I first met her, she lived in a humongous English castle. She has been a supportive friend and is just as lovely in person! So positive and warm, she welcomed us to her newly renovated and gorgeous home situated on a hill between enormous fuchsia trees. Yes, those hanging baskets we buy can become ginormous! She is an author (check out her fabulous books here) and her blog at Barb Taub, Writing and Coffee, Especially Coffee.

After tea time, including delicious cookies, (I’d love the recipe, Barb!) she drove us to another part of the island. We would see something so mysterious, scientists still can’t explain why they exist. 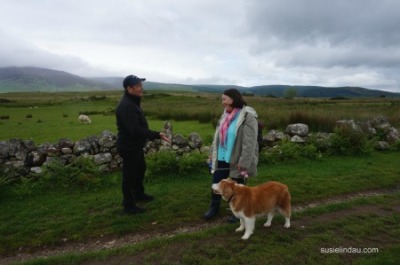 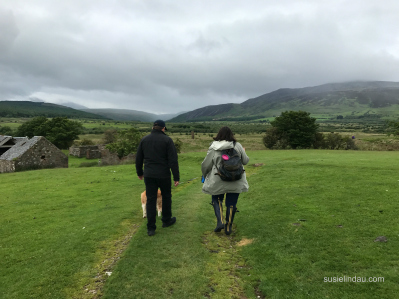 We hiked among the baaing (that appears to be a real word), sheep to the standing rocks; an unexplainable, ancient henge. Positioned with the sun in mind, several of these circular groupings have been there for thousands of years. Scientists tested their composition and they aren’t from any place near the island. Whoa.

I tried to step through one of them like Clare in Outlander, but all I got was a knot on my pointy head.

More about the standing rocks will appear in a later post.

We woke early to catch a flight to London. I wished we could spend more time with Barb, but more adventures lay ahead. 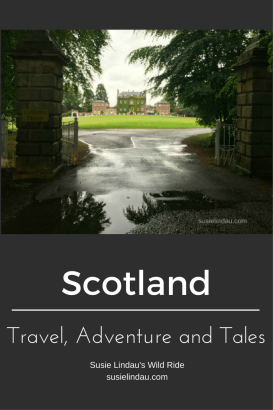 This trip has been beyond my wildest dreams. The next evening, we met another fabulous blogger friend. She happened to be in our London neighborhood the night before the famous Bloggers Bash.

Lots more to come including Comic Con where I met Andrew Gower who plays Bonnie Prince Charlie! Life is so ironic.