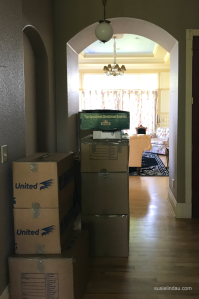 Sometimes fate is created with a hint of timing, a splash of coincidence, and a whole gallon of serendipity.

When our ceiling caved in from our demon washing machine, contractors and workers descended on our home. At first, I thought water damaged three rooms. Then we discovered ALL of the wood floors would have to be refinished. We would have to move out. Danny mentioned going on a vacation, but I couldn’t imagine where. East coast? West coast? The south somewhere?

How could we throw a European vacation together that fast. I was still reeling from my brother’s death.

One week out of the house became two. When we learned we would have to move out for three and a half weeks, starting June 2nd, I had to sit down. That’s a humongous trip to plan and we didn’t have a lot of time.

A hint of timing walked into the room.

While sitting down, I calmed myself by reading a few blogs. I found Sacha Blacks’ post about the Bloggers Bash being held in London. It would be held on June 10th. Whoa!

Danny read the paper next to me.

“There’s a bloggers bash in London on the 10th. Maybe we could start in Scotland and then hit the Bash.”

Danny was all in.

London became our first pin on the map. The plan to travel Europe was born. I paid the $20 for the two of us online and we grew our trip from there, forward and backward. We traveled all around Scotland, stayed for a long weekend in London, hung out in Paris for eight days, then drove to Antwerp, Amsterdam and Bruges.

After an adventurous week in Scotland including living in a castle and touring several others, we met a blogger on an island who showed us standing rocks. Then I was contacted by another blogger.

To say I was excited to meet Vanessa-Jane Chapman would be an understatement. Vanessa read my blog post about preparing for the UK, so she contacted me through Facebook. After giving her the deets, we couldn’t believe our good luck! She only makes an appearance once a month in London blocks away from our hotel. We could meet for dinner! 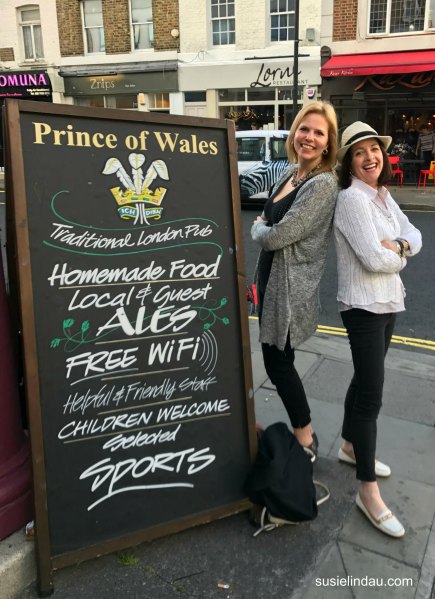 Just like so many other blogger meetups, Vanessa-Jane was just as lovely in person. Bubbly and full of energy, especially for someone who had worked all day and then taken the train into London, we recognized each other immediately!

We shared writing stories while Danny patiently nursed a beer happy to relax after a hectic day of travel. We discovered we knew each other through bloggers like Darla of She’s a Maineiac, Peg from Pegoleg’s Ramblings, Jules from Go Jules Go, and Paul from The Good Greatsby. We recalled the good old days when our first circle of friends posted a few times a week.

We caught up over happy hour and nibbles at one noisy bar then found a quieter spot across the way.

Vanessa is multi-talented, wild riders. She not only writes cookbooks and is working on her memoir, she has performed standup, is a mum to two fine children, and also sings with a band! Unfortunately, she didn’t have a gig that weekend. Dang! Danny and I would have been in the front row as super fans.

Like I say to all of my blogging friends, “Look us up if you ever come to Colorado!”

The next morning my heart beat wildly in my chest. Nope, it wasn’t a heart attack. It was excitement and maybe just a wee bit of anxiety over the original reason why we came to Europe. The London Bloggers Bash! I would meet icons like Hugh from Hugh’s Views and News, the famous organizer Sacha Black from the blog of the same name, (Go buy her new book on how to write superbad villains, here) and several of my blogging favorites, like Suzie from Suzie Speaks!

Danny and I stayed at the Grange Wellington where the bash was held; a beautiful hotel not far from Victoria’s Station. After a fabulous English breakfast (I miss those epic feasts in Scotland and England. Granola just isn’t cutting it), we took the “lift” upstairs and poked our heads inside the conference room. I recognized Hugh from his dashing profile picture.

Being the subtle Colorado girl that I am, I fan-girled out and shouted, “It’s Hugh from Hugh’s Views and News!” Once I calmed myself, I introduced myself to the blogging icon, Sacha Black. Then I dismissed myself since they were still setting up. Ahem.

Matt, looking on, and our hosts Sacha, Hugh and Ali from Ali Isaac Storyteller.

An hour later, Danny went for a tour of London while I met Graeme Cumming who signed me in to the Bloggers Bash. Then I came face to face with the fabulous Suzie from Suzie81Speaks and Elena Peters of Pinterest fame. Very sweet Helen Jones from Journey to Ambeth (a doppelganger for Uma Thurman) and the Lively Miss Lucy from Blonde Write More. That girl emanates energy and positivity like a beacon! Through reading their blogs, I felt like we’d already met. Then I had the pleasure of meeting Ritu from But I Smile Anyway, who won the well-deserved top Bloggers Bash award (none of us can imagine how she finds the time to blog and promote others while raising kids!), and Matt from Gay Stepdad who took second in the humor category.

Elena, Suzie and me! 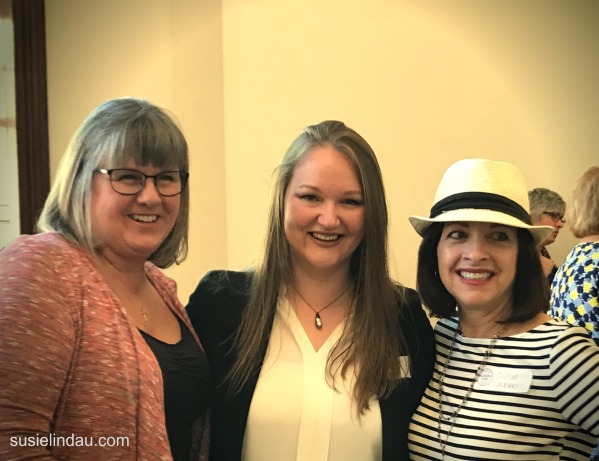 I found my peoples! Yes, peoples with an s.

Although short, the conference was well organized and kept a brisk pace of thirty minutes per topic. Geoff from Tangental, a natural to the stage, emceed. The guy should have his own show! Then Sacha kicked things off with a brilliant and inspiring speech to around forty of us in attendance. Awards were given out while Hugh recorded on Facebook Live. After a break for lunch we got down to blogging business, literally, with an eye opener from Suzie about monetizing your blog, followed up by an informative lecture about how to become a master at Pinterest by Elena Peters. After a few more short sessions it was time for the best part, blogging happy hour.

Then a nice lady walked up to me and said, “I tweeted you this morning.” It was the red-headed horoscope blogger and poet, Sue Vincent!!! (Bottom left corner)

I ran up to get my jacket and missed the gang who went out for dinner. Danny and I dined nearby, then walked back and found Hugh, Ali and Helen chatting on a couch in the lobby. “Geoff ran back to find you, but you had already gone!”

“What?” Wow. They had walked to Victoria’s Station and realized we weren’t there. How cool is this group of bloggers? Although I’ve been blogging for six years, I was a completely new face to most of them. We made instant connections!

Friendships can develop through all means, but they all start with a conversation. Bloggers are penpals. We write about our lives and share them with others. Words can bridge thousands of miles. I’m thankful for my demon washing machine and the twist of fate which brought all of us together starting in Scotland with Barb Taub.

Nervous about meeting bloggers in real life? Come with a smile and an open heart. It doesn’t take too much to bond. We are similar creatures and always have a story to tell!

I Celebrated a Birthday, But Failed to Save a Life

Crossing Paths with Mary, Queen of Scots in Scotland