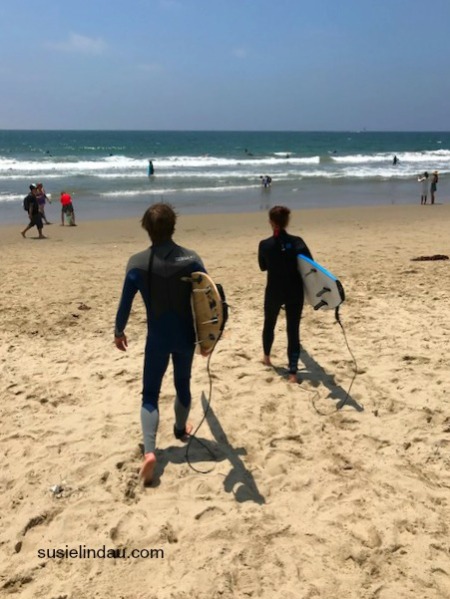 The crashing of the sea drowned out my beating heart as I stepped into the waves with my surfboard. I would share this massive body of water with all kinds of sea creatures including sharks. The last time I surfed, the rhythmic waves in Costa Rica made standing up on a board as simple as standing on a picnic table. That board’s width and length helped too. This time would be different. The foam board would be gentle on my knee if I smacked it, but its narrow width and my still wimpy left leg would make balance squirrelly. I was stoked for the challenge.

I have never been at ease when black water swirled around my body. I’ve spent a lot of time in lakes and had been nibbled several times. But a lifeguard stood on the Santa Monica beach while helicopters watched from their perch in the sky. I had no fear of sharks. 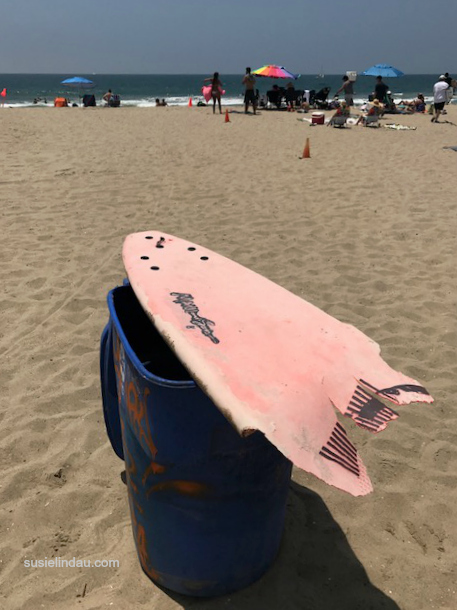 Fear is a funny thing. Our imaginations can wreak havoc with confidence. Knowing the stats keeps me from being afraid.

Shark attacks in the US:

16 attacks per year in the US.

Car accidents in the US:

20-50 million people are hurt or maimed in car crashes. 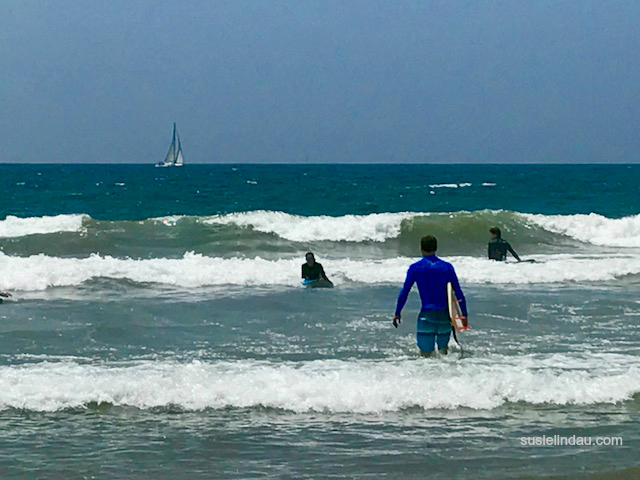 The woman who helped me with my rental wetsuit mentioned her fear of big waves. As a water skier, I’ve been tossed like a skipping stone and body slammed into the wake. I’ve tumbled under deep water after wiping out while slalom skiing. I had never panicked while swimming toward the sun.

My son rented a wetsuit too. The last time he surfed, he fell off his board and the fin sliced through the thick material. He bought a repair kit.

Being pretty much a novice surfer, I did have one fear. Other surfers. Once we arrived at the beach, I headed for an open spot and practiced riding the surf to shore. It was a blast. 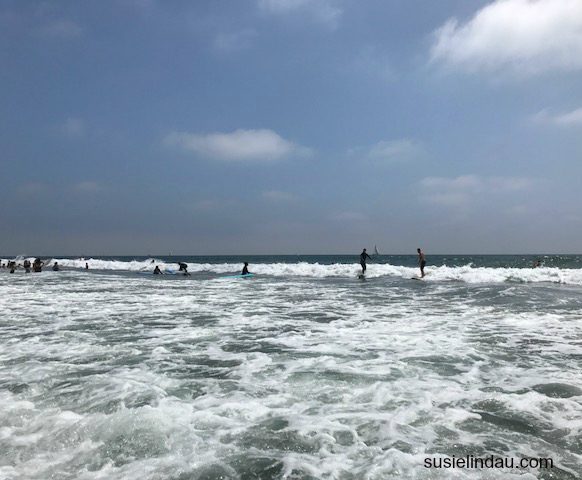 After surfing for a couple of hours, I was ready to quit. My tired arms had held my board countless times against the torrential current. As the ocean surged again, I readied myself for the onslaught. I planned to ride the wave to shore.

The huge swell caught me early, but I stayed upright. Instead of looking back, I knew the next would slam into me in seconds. I waited.

That’s when I felt it.

The impact of a surfer’s board bashed into me from behind. It knocked me into the agitated breaker. Being in water slows motion, so I covered my head. The fin sliced the bottom of my foot. As I finally found my way to the surface and stepped down, I was sure it had cut through the skin. It felt gaping. The surfer apologized and wanted to know if I was hurt. I didn’t want to look. Luckily, only a long welt formed. No cut just banged up in a few places.

Where does most fear of sharks come from? The most famous of shark movies: Jaws.

“It’s safe to go back in the water, We’re going to need a bigger boat,” and “That’s some hat Harry,” are my favorite lines. I remember seeing the film in a movie theater and bruising my knee on the seat ahead of me when that gargantuan great white appeared for the first time. My first shark attack was virtual.

A couple of summers ago, I watched Jaws poolside. Coolest experience ever. As the tension grew taught, fewer swimmers remained in the pool. All it took was two notes. 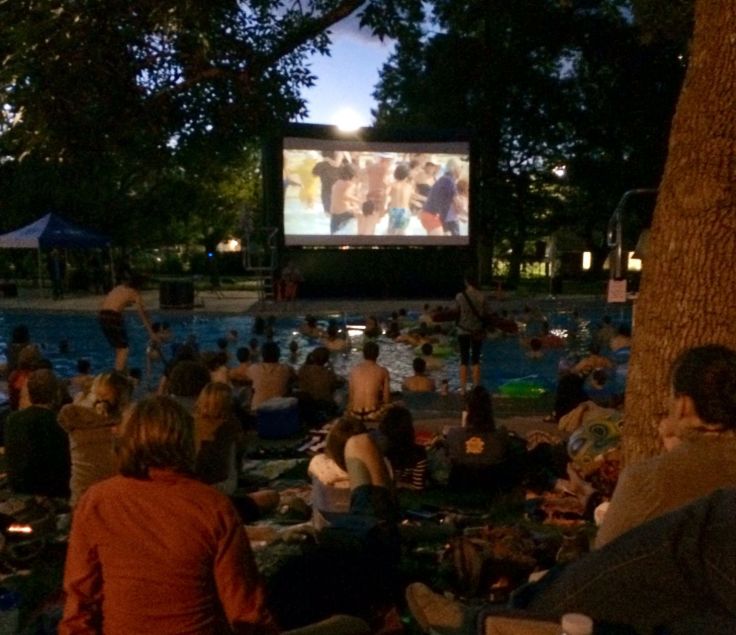 I didn’t see any sharks, but I did get hurt. Will I go back? Of course!

Fear is often irrational. You could be that one in a million. Someone is. I would rather focus my attention on being lucky enough to get traditionally published or win a contest. Remember, where attention goes, energy flows. Yep. I won’t think about other surfers next time.

What is your worst fear? Would you face it if you had the chance?

Solid Gold Summer Sunsets and What Lies Beneath

79 thoughts on “Back in the Water for #SharkWeek”