When the opportunity for a backpacking adventure in the Rocky Mountains arose, my thoughts raced back in time to when I hiked with a group of friends from Snowmass right outside of Aspen. My girlfriend had pointed to the peaks way out in the distance and said, “That’s where we’re going.”

We had started in a dense forest and emerged above treeline. Several miles and thousands of feet in elevation later, we scrambled over boulders as big as Volkswagens straddling deep dark crevices between. Near our destination, we all took baby steps while sucking in the thin air. We were over two miles above sea level.

That night, we camped in an otherworldly atmosphere next to aptly named Moon Lake. Some of the campers woke early to climb a 14er, (a peak 14,000 feet above sea-level.) I was happy to get a few extra hours rest (I doubt that I slept), to build reserve energy and strength for the trip down. It had to be so much easier with gravity pulling and oxygen increasing with every step, right?

When we hit the boulder field again, I found it super challenging to scooch over those enormous rocks while wearing an exterior frame pack. The metal “feet” caught the rock and threw me off balance. A few times I steadied myself to catch my breath while gazing down at those gaping crevices. I breathed a lot easier once we entered the forest. When we reached the car, I dropped my enormous backpack and vowed to never go again. It was too hard.

Decades later, I jumped at the opportunity to backpack to Sawtooth Mountain. What had changed? I’ve been weight training since March and figured I could carry twenty-five pounds a couple of miles. My husband, Danny, and daughter, Courtney, and I wouldn’t be in a race and we could rest on our way up. I looked forward to the challenge!

Danny had planned the trip. It would be a four-mile hike up to Coney Flats. Right.

“I can see Sawtooth from my house,” I said in a Palin-like voice as we packed up the truck. We would camp below its crest. It would be cool to see it all up close and personal after all the years of admiring it from afar.

When we arrived at Camp Dick to park the truck, Danny informed us that we would take a different route. We would hike six miles. Whoa! It was too late to back out now. What were two extra miles anyway? I could do it.

I picked up my pack, surprised by its weight. Large and unwieldy, I needed help putting it on. The climb would be steady but the final destination name, Coney Flats, relaxed me, somewhat. I figured the hike would flatten out. 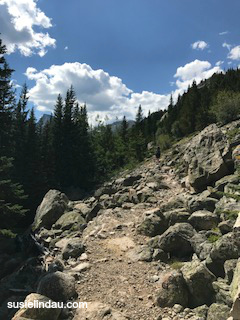 At first, we strode up the trail along with many young families. Watching little kids trucking on their short little legs inspired me to keep up a quick pace. After a couple of miles, my pack dug into my shoulders. It didn’t fit my body properly. I discovered that reaching behind and clasping my hands behind me lifted the bottom of the heavy pack above my shoulders.

Courtney and I resting after the first two miles. 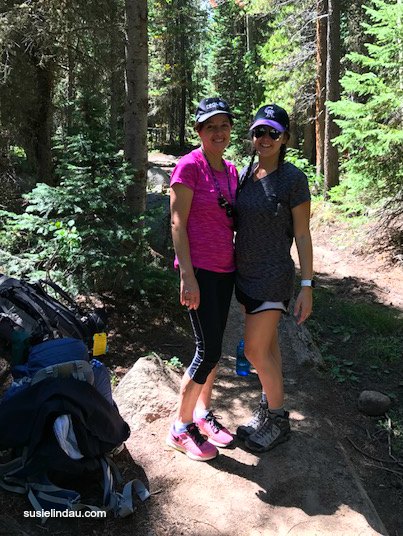 Courtney used GPS and tracked our progress. We hiked two miles in forty-five minutes. At mile three, our pace slowed. I couldn’t wait to take off my pack and set up camp. Three more miles.

After another mile, we realized the bad news. It would take us another four miles to reach the summit. Eight miles to Coney Flats. EIGHT MILES! I’ve never been a quitter. I sighed and we continued to hike up the mountain path.

We crossed a river and hit a gravel mining road. It was hard to keep from slipping while navigating the treacherous, gravel, uphill climb. From there we thought the lake would be around the corner. Nope. We found the wilderness trailhead and then continued through a bog.

When we made it to the sixth mile, Courtney gave us the bad news. We still had a long way to go. GAH! We zigzagged through the muck while swatting at various nasty pests. Finally, we hit solid ground and re-entered the forest.

A few day hikers traipsed down the trail toward us.

“How far is it to Coney Flats?” I asked. I was out of gas after hiking for four hours straight. I prayed he’d say it was around the corner. It had to be.

“About another hour,” said a young hiker.

NOOO!!! My pack felt like it held bricks instead of a sleeping bag, tent, and clothes.

The group passed and a young woman brought up the rear. She must have overheard her friend. “It’s only twenty minutes to the lake, but the river crossings are tough.”

We marched on until the trail met the river. We had to cross it by walking over the trunk of a tree. I used a walking stick for balance. The second crossing wasn’t as bad. 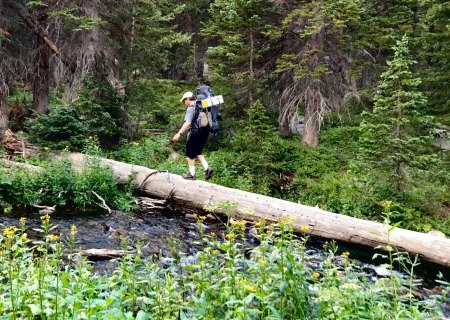 The third was insane.

The rushing river was much wider. First, we had to step up onto a small fallen tree and balance on its trunk to cross the narrow part of the stream. I didn’t have the strength to push up on my weak left leg with the extra weight in my pack. I found a walking stick and finally stepped up. As I crossed the stream, I lost my balance. I plunged the stick into the water. It kept me upright. I made it. But the second was a forty foot crossing. Slow but sure we all made it across.

By now daylight was fading. We continued to climb uphill. When would we arrive at Coney of Flatness? We had been walking for five hours. My pack felt like it weighed fifty pounds.

After another half hour, my legs hit a wall of exhaustion. I remembered my personal trainer, Sam, who recently competed in a Half Iron Man. He said that when you become a mouth breather, your body has used all of its energy. I fought that impulse and made myself breathe through my nose.

Soon the forest broke open to a beautiful meadow. I stopped to take pictures and rest. It couldn’t be far now.

As we hiked up a knoll, Courtney hooted and hollered.

We had made it to Coney Flats after six hours and eight miles of hiking. It wasn’t flat at all. There was a campsite at the top. As Danny and I climbed up the hill Courtney strode down the other side. “The lake is right below us!”

I glanced up at the sun. We had about fifteen minutes to set up camp before it set behind Sawtooth. A cold breeze picked up and we hustled. Just after we staked our tents, I found a much nicer and protected site out of the prevailing wind. The tents flew behind Danny and Courtney like kites as they picked their way down the narrow trail. We set up camp a second time. 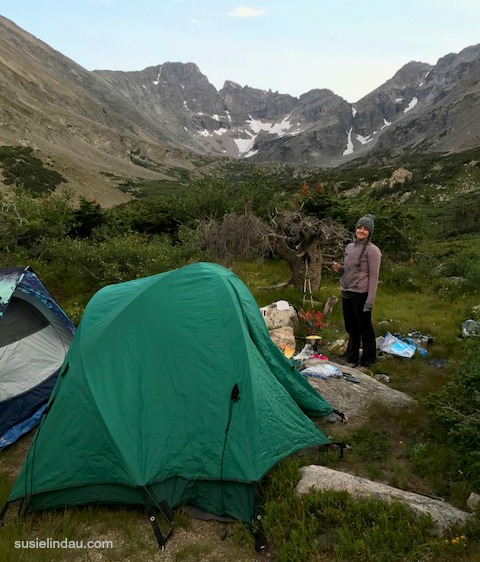 By the time we made dinner, it was dark.

All night long, I heard little animals foraging around our campsite. I slept for about two hours. The next morning, we enjoyed the early morning sunshine. We ate breakfast, then hiked down to the lake to filter water for the trek back home.

We were the only people around. It felt good to breathe fresh air and stretch sore muscles. We broke camp and packed up. My backpack seemed a ton heavier the second day.

Enjoying the elixir of the gods with an elfish grin.

Just like my last backpacking trip, the hike took half the time on the way down. We entered the parking lot just as rain fell in huge drops.

Danny, Courtney, and I hit the road and talked about the trip.

“I would definitely backpack again, but only if we cut down on the miles. Sixteen in less than twenty-four hours was way too much.” We all agreed on that.

I reflected on what had changed for me. I had grown up camping and had missed the quiet solitude, being outdoors, and exploring a new area. When I backpacked years ago, I didn’t need to challenge myself. I was young with nothing to prove. If I didn’t feel like doing something, I didn’t do it.

After going through a heart ablation, breast cancer, and a partial knee replacement, I wanted to prove to myself that I had completely recovered and in some ways, was in better shape than the last time I backpacked. Challenging myself built confidence. Perseverance prevailed. Next year, I’ll plan the trip.

The Moose is Loose!

Are You Adventurous? Take the Quiz!

Have you ever backpacked? Have you pushed yourself out of your comfort zone? Have you been to Colorado?

77 thoughts on “Backpacking Challenge in the Rockies”