Stephen King and Maine inspired me when visiting two weeks ago, but probably not the way that you think. It’s the perfect state for King to live in and produce books. A certain kind of books. Horror. Sometimes vacations aren’t at all what we expect.

Our first stop on the tour of Maine.

After flying into Bangor for our 30th wedding anniversary, Danny and I rented a car and drove right to his house. Okay. That sounds super creepy and stalkerish, but it’s a town landmark. Go ahead. Google, Bangor Landmarks. It’s on the list along with Paul Bunyan’s statue, (Dang, missed that one), and the Bangor Historical Society, with Chipotle Mexican Grill at the top of the list. Bangor has a population of 32,000.

As I drove up West Broadway, there were several cars parked along the wide avenue. Some voyeurs took pictures through the glass of their vehicles. Not us. We walked up to King’s gate. The wrought iron contained a spider and web, a dragon, and a capital K, just in case you weren’t sure if you had the right address. Exposed to the street, the home seemed to invite onlookers, as opposed to the house next door which hid behind a thicket of bushes and trees. The weather was perfect. Drizzling with a touch of fog.

Then we ate lunch in downtown Bangor. An advertisement for a play at the Penobscot Theater hung in the window. My favorite of all of Stephen King’s work, MISERY would open on Thursday night! We bought tickets for a mere twenty-seven dollars. I wondered if The Man himself would be in the audience.

In the meantime, we explored Bar Harbor, Bucksport, Camden, and Rockland and found a few bookstores. Each had a section set aside for Stephen King’s books. Some were like shrines. 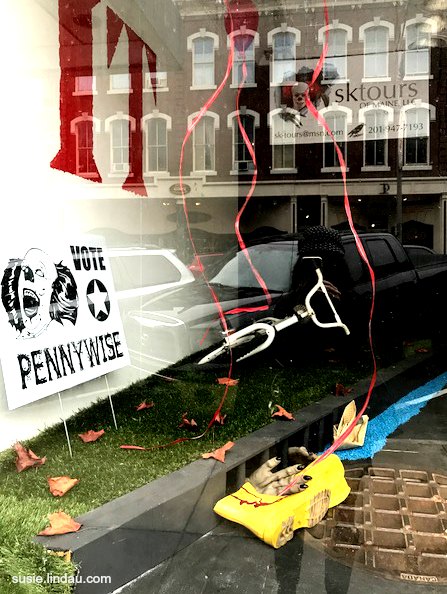 “He’s prolific,” said a young waiter. “He writes every day and sticks to a routine.”

Curious, I looked it up. According to an article written for Open Culture, King ritualizes writing time like some prepare for bedtime.

He’s quoted as saying in Lisa Rogak’s Haunted Heart: The Life and Times of Stephen King:

“I have a glass of water or a cup of tea. There’s a certain time I sit down, from 8:00 to 8:30, somewhere within that half hour every morning,” he explained. “I have my vitamin pill and my music, sit in the same seat, and the papers are all arranged in the same places. The cumulative purpose of doing these things the same way every day seems to be a way of saying to the mind, you’re going to be dreaming soon.”

Maine is a summer vacation destination.

We arrived in October! Somehow, we didn’t get the memo.

Some shops and restaurants had already shuttered. We stayed at the gorgeous West Street Hotel in Bar Harbor and discovered nearly the entire island including the hotel would close in another week or two.

Until then, cruise ships deposited eight to ten thousand people on shore EVERY DAY! Older people filled the sidewalks, gift shops and restaurants in the quaint downtown. Sometimes I led Danny into the street to pass them.

Because of the older median age of the tourists, warning signs lined the trail in Acadia National Park.

After leaving Acadia, I looked up towns to visit. A blog post with Prettiest Towns in Maine came up at the top of the feed. I perused the list. Portland was too far away and so was Kennebunkport. Blue Hill was sort of on our way back to Bangor. We arrived and drove past a gas station, a co-op, a gift shop, cafe, and beautiful harbor surrounded by nicely tended homes and yards. We drove back and asked a customer coming out of the store with a bag of groceries. “Where’s the downtown?” I asked.

Most of the towns were like that. We rarely saw fishermen on the lakes or active boats in the harbor. I had always dreamed of going to Maine to embody Jessica Fletcher from Murder She Wrote and ride my bike. We only saw one biker since the hills were killer.

Every town seemed to hold its collective breath.

I thought fall color would be at its peak.

Because of warm and dry weather, most leaves were still green and many had already dropped. That happened in the Colorado mountains last fall. We arrived on their first rainy day.

We found colorful landscapes in Acadia.

We encountered more cemeteries than people.

We could drive for miles and never see another vehicle or police car. The entire population of the state is around 1.3 million.

Between the ghostly quiet towns and the huge expanse of undeveloped forested areas, goosebumps rose on my arms more than once.

I described the isolation to my son who said, “Maybe it will inspire you to write a book. It sounds like a great place for serial killers.” Right after his comment, I noticed Patterson’s new book, HAUNTED, about this particular variety of killer set in Maine. He must have traveled there in October.

Winters are tough. The state depends on summer tourism. We ran into an enthusiastic local in Acadia National Park who raved about wintering among the shuttered towns. “We sled and cross country ski. It’s beautiful in the winter.” The Mainers were very friendly, positive people reminiscent of the Midwesterners I grew up with. We really enjoyed meeting them.

On Thursday night, the Penobscot Theater filled and the lights dimmed. After the first few lines, the words, “I’m your biggest fan,” were uttered by the character, Annie Wilkes played by AJ Moonie while grateful and drugged out Paul Sheldon, played by James Konicek, groaned in pain. Moonie nailed Kathy Bates’ portrayal of the deranged nurse and I could almost see James Caan in Konicek’s pained expressions as the crippled victim.

Here’s what surprised me.

In the super intense parts of the play where Annie became brutally violent, the crowd tittered, giggled, and a couple guffawed. Every time someone made a bodily sound it woke me from MISERY’s spell.

When I mentioned it to my son, he remarked that sometimes people react inappropriately when fearful. The scenes were super realistic. I cringed several times, so that could be true.

I’ve been to children’s productions where the audience showed more respect to a cast by not talking. Maybe Mainers don’t get to the theaters very often where we are all instructed to sit quietly. I’ve never witnessed anything like it.

It didn’t throw off the actors. They never missed a beat. Maybe they’ve witnessed this many times before. The small ensemble cast of three would make Stephen King proud.

We scanned the audience but King didn’t make it to that night’s performance. I’m sure he will take a stroll to the theater sometime between now and November 5th. I bet he’ll love it. We did!

The irony of the setting hit me afterward. King chose Colorado for MISERY, even though I found Maine a better location in many ways. I could imagine super fan, Annie Wilkes, lurking in a clapboard house under the canopy of gnarled oaks just waiting for her chance. Both places endure winters with lots of snow.

Stephen King and I almost physically ran into each other many years ago in a fitness club. We both said, “Oops, sorry,” and kept walking. At the time, he consulted on the mini-series, THE SHINING which took place at the Stanley Hotel in Estes Park. THE STAND took place in Boulder. He must have been inspired by his trips to Colorado. His latest release, SLEEPING BEAUTIES, co-written with his son, Owen, takes place in a poor Appalachian town. Perfect.

Danny and I almost left Maine a day early. Instead, we drove to Camden, one of the highlights of our trip. I took this photo as we headed out of town.

Life being ironic, as usual, we got stuck at the airport due to thunderstorms in Chicago and a stubborn baggage door. We had to stay an extra day!

Instead of flying through Chicago that Sunday, we traveled through New York. I remembered my son’s words when starting the four-hour trip home from JFK. “Maybe Maine will inspire you…”

I pulled out my cell phone and began to write.

Have you ever gone on vacation with completely different expectations? What’s your favorite King novel? Have you seen IT in the theater?

Haunted at the Stanley Hotel