Since I live in Colorado, I’m always on the lookout for wildlife. I’ve spotted them on hikes, while skiing, or through a car window. Prehistoric porcupines, bear, elk, common deer, bighorn sheep, you name it. But this year, my wild life has gotten wilder. Several otherwise elusive creatures have made appearances in the most unlikely of places: My home.

Bullsnakes have made their way into my home twice. A newborn made its way through a light fixture since I found it on top of my flat file. It became a pet for the winter. The kids released it the following summer. The other must have pushed its way through the doggie door. I thought it was one of the rubber snakes from downstairs carried by our Bichon, Roxy. Nope! I put it in an aquarium until the weather warmed up and then let it go. The one in the picture was full grown (about four feet long) when I found in the garage. I picked it up and released it into the garden.

Several families of owls love to perch on and around my house. As the sun sets every night, I can hear a couple hoo-hooting to each other.

Two weeks ago, something hit a window. I rushed to my back door to see. A baby owl sat on the stoop. I waited until he flew away to be sure he didn’t become dinner for one of several hungry predators who lurk in our yard at night.

Last week, I heard the most annoying screeching sound. When the dog went nuts, I ran to the window. A huge owl stood on a planter screeching, “Good morning.” Ha! Worst sound ever.

While in Europe after a disastrous water leak from a demon washing machine, our wood floor guy, Nick took pictures of a lynx! Yes, this is our deck.

According to my neighbor, two bobcats hung out at the front door while we were gone. Make yourself at home, why don’t ya? Of course, I never saw them after returning from our trip. Gah! 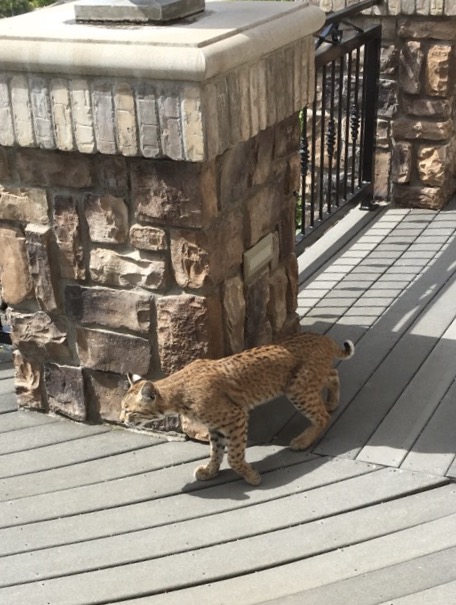 In April, an enormous gold “housecat” walked around the pond. Later, I found out a young cougar has made our neighborhood its hangout. Unlike the lynx in the photo above, its tail is long. It’s a yearling and still pretty small, but the doggie door is shut until further notice. Poor Roxy.

Remember Roxy and the Coywolf? I don’t trust that she’s learned her lesson. She got lucky when that beast laughed and released her from its jaws in 2015. This time too. 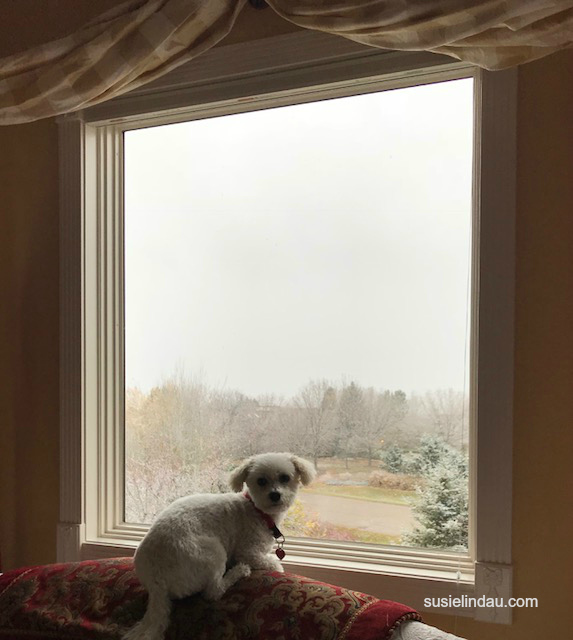 As I’m typing this, I’m at a desk in the window being totally distracted by the backyard view. You never know what might take a shortcut through our property…

Our family had an unexpected visit last Sunday up in Breckenridge. I’ve seen them at Brainard Lake, at the bottom of Peak 7, but not in my neighborhood!

My husband, Danny, rushed toward me as I walked out of the kitchen. He had an insane look on his face. My first thought was whatever he would say next would be completely sarcastic. “There’s a moose in the driveway!” he screamed. Yes. SCREAMED!

Stained glass windows flank the front door. I saw a massive black shadow beyond. Instead of running for my camera, I rushed downstairs and shouted to my son who talked with his girlfriend on the phone.

He ran upstairs and used Facetime to show her the incredible sight. Right outside our picture window stood a full-grown male moose complete with wicked cool antlers. A yearling grazed nearby. We trapped the dogs in the basement to keep them from frightening the pair. 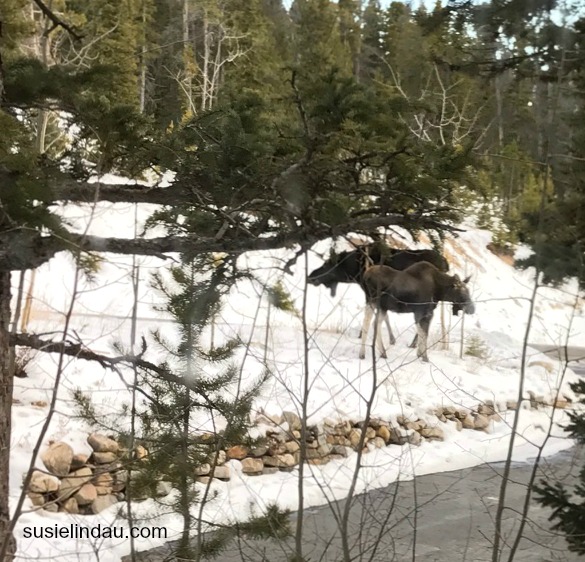 After taking a few photos, we caught our breath. Minutes later, another shadow graced our front doorway. The cow brought up the rear of the little family.

As the sun sinks lower in the sky, I’m still waiting for my glimpse of the elusive wildcats. It’s 4:30 and owls have begun their hooting chant. Another just landed on our roof. The raccoons will scout and a pack of coyotes may send out an eerie cry.

I love where I live. There’s plenty of room for all of us.

What was she thinking?

The Moose is Loose!

Not in My Neighborhood!

Taking It to New Heights – A snake encounter…

Have you seen any unusual wildlife? Has your life gotten wilder lately?

91 thoughts on “The Wildlife in My Wild Life – Photo Essay”