As we get into our comfort zone of routine, we challenge ourselves less and less.

I took on a challenge last weekend and learned why facing fear and abject humiliation is important for personal growth. I still have a lot of growing up to do. Ask anyone!

I’ve been a skier since the seventh grade. It took years to master the intermediate runs and even more time on the slopes to tackle the expert black diamonds, and moguls, let alone the double blacks. I’ve been heli-skiing where the guide led me right into the trees of Canada while I prayed Hail Marys. I got the hang of it and my skiing skills greatly improved. Now I can ski just about any part of a mountain.

I skied this bowl right after I was released into the wild after double boobectomies. 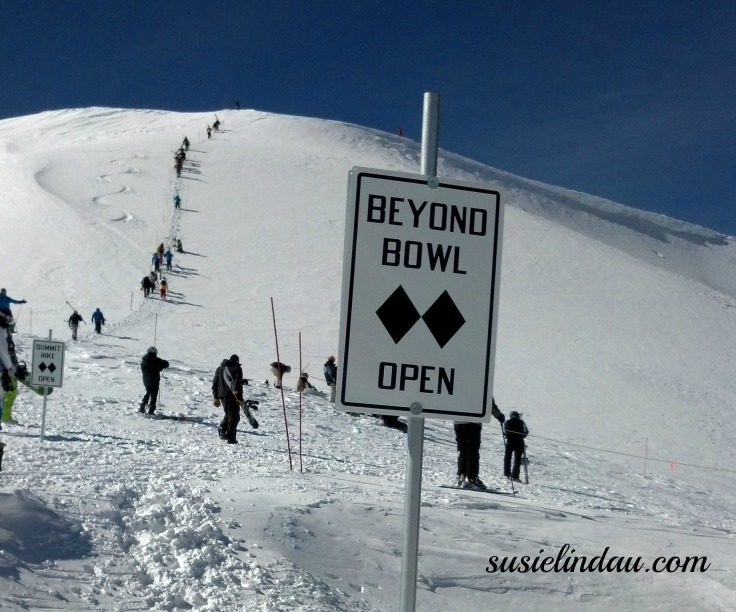 Here’s the thing. You can slap on a pair of skis and make it down the hill pretty easily in “pizza position,” toes pointed toward each other like a plow. But it takes tons of practice to “carve up” the harder, steeper, faster runs. It’s a bell curve created over years and years.

Learning to snowboard is the polar opposite of skiing.

The beginning of the learning curve for snowboarding is a freakin’ headwall. It’s super hard at first and painful, but after a week or so, most snowboarders are linking turns down most of the mountain. They make it look so easy!

Years ago, I left my skis at home and snowboarded. I fell so hard and so often, I bruised my tailbone and couldn’t sit down for a week. Ouch.

A few weeks later, I decided to try again and prepared for pratfalls. I wore every pair of snow pants in the house along with children’s mittens with thumb and wrist guards. Overdressed and sweating, I could hardly move. I hoped a lesson would give me the confidence to “shred.”

While the rest of the class focused on their boards, I stood on my toe edge and looked up the mountain. After a few feet of sliding sideways, I fell backward so fast I didn’t know what happened! I smacked my head into the snow and saw stars for the first time in my life. It was a slight concussion. I toughed it out and got through the rest of the day. My butt survived, but I ended up with a nasty case of whiplash.

Flash forward fifteen years to the next challenge.

It’s been the worst ski season ever for Summit County in Colorado, at least in my memory. Days have been too warm and the snow too lean. When the weatherman predicted 50-degree temperatures on Saturday, my daughter, Courtney, suggested we all switch equipment. She’s a snowboarder and rented skis. My husband, Danny, Courtney’s boyfriend, Dan, and I all geared up for snowboarding.

I have to admit, I was pretty nervous. With a partial knee replacement only three years ago, I couldn’t rely on falling forward uphill, which is so much easier on my body. Luckily, Danny brought up some sturdy knee pads and I wore elastic braces. This time, I didn’t worry about my rear end and wore regular ski clothes. It was hot outside.

While pulling on my boots, I strained my thumb. No lie! I was in denial since it was such a stupid injury. I hoped it wasn’t foreshadowing of injuries to come.

When we arrived at the mountain, I stood and stared at the toddlers on the super small bunny slope. I wondered if adults could join them. Then I noticed a longer 1% grade hill with a moving sidewalk. YES!

After walking up the small slope, I strapped on my board, scooched myself forward to slide and fell backward! I smacked the ground and heard my neck snap. Dang! Not a good start. I knew endorphins would kick in and I wouldn’t feel anything until tomorrow. There was no way I’d give up that easily.

I used special effects so it looks like I’m moving faster than 10 yards per hour. 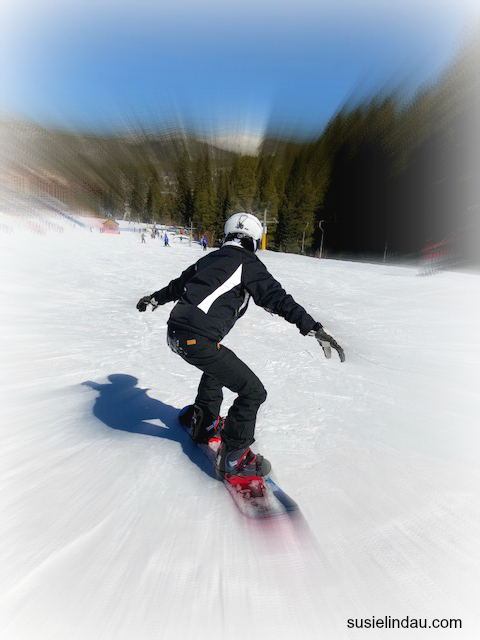 I thought I would remember how to snowboard, but too much time had passed.

My daughter and her boyfriend watched while Danny and I took super slow turns on the 1% incline with others, age four to adult. Ha! I was cool with that.

Courtney warned me not to take the Poma lift. “It’s easier to take the chairlift.” I looked up the slope at the throngs of people skiing and riding down the mountain. I’d kill someone.

Instead, I hiked up the baby slope and rode down a few times. Then I graduated to another area for rank beginners with a 3% grade. My driveway is steeper.

Slowly but surely I got the rhythm of heel edge (falling leaf) and toe-edge. Every time I tried to link them, I face-planted. Exhausted from hiking up the hill, I tried the Poma lift. When I was almost at the top, my boot slipped from the board and I wiped out. I dragged myself out of the way. I rode my board down and tried the lift again.

With only one successful trip to the top out of six attempts, I tried again. As I approached the end of the lift, I thought I had made it! Just as I moved to release the lift, I fell hard. My elbow struck the ground and my head hit my shoulder as if someone struck me with a baseball bat. How is that even possible????

I avoided the Poma lift the rest of the day and didn’t fall. During my last two runs, I linked turns from heel-edge to toe! YES. The feeling of victory! 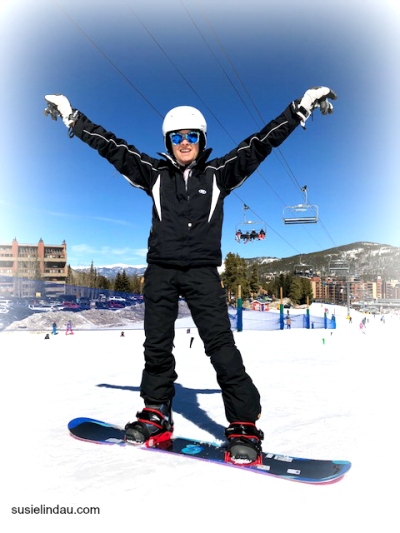 That night, I woke up and couldn’t lift my head off the pillow. My neck and shoulders had seized up. As my muscles warmed up the next morning, I was able to see my toes. The pain wasn’t too bad.

Why put myself through this?

Because challenges are good for us!

It’s what we ALL did as kids. We were introduced to new activities all the time. As we age, we settle into routines and seldom try anything new. That’s a mistake.

10 reasons why you should challenge yourself:

I double dog dare you to make a list of all your fears.

Now I triple dog dare you to face them.

Imagine if we faced all of our fears. Since I haven’t spoken in front of a huge crowd, public speaking remains one of my biggest. Someday, I’ll face that one head on, literally. It will be terrifying, just like edging downhill with a board strapped to my feet.

Will I snowboard ever again?

I’m traveling to Lake Tahoe to ski for a week. I hope to take a snowboarding lesson. My main goal? To take the chairlift without killing myself or anyone else. I won’t have to hike up the mountain while carrying my board.  I’ll be on my way. Three more times this season and I’ll be on the leeward side of that bell curve!

Do you avoid challenges or embrace them? Do you see a steady decline in trying new things? How could you get out of your comfort zone?

Click here for more inspirational misadventure on the Wild Ride.

What Doesn’t Kill You… Helicopter Skiing in Canada

Back on the Boards!

A Second Chance for a First Impression at Winter X Games