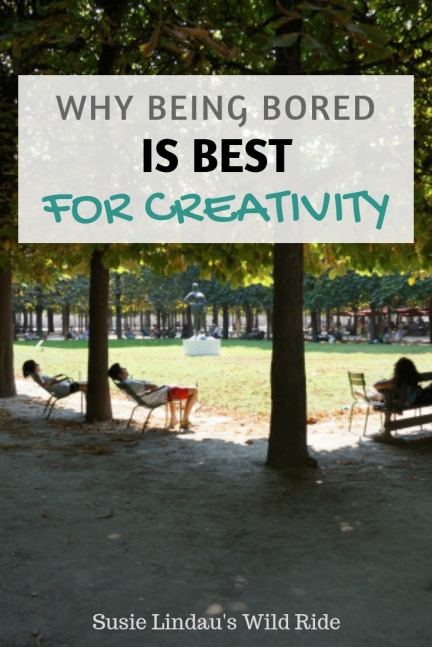 The best way to be more creative may include adding a little boredom to your day.

Creativity is the opposite of boredom and seems counterproductive, right? Everyone wants to create something new whether it’s for your brand, product, or in your plain old thought process which can easily become a loop like TV news station. “This just in! You screwed up again.” A new book, Bored and Brilliant by Manoush Zomorodi explains how being bored and spacing out is linked with creativity. What?

I hate being bored. Must of us try to avoid it. We plug into to our computers, TV, and phones. We’re busier than ever. When I’m not writing, I’m marketing, adventuring, socializing, taking care of myself, my family, my home, yada, yada, yada. This leaves me very little time to sit around and space out.

Cell phones replace downtime and keep us from being bored.

My phone has become my constant companion and an integral part of my existence. I’m not a gamer, nor am I constantly checking text messages, stats, or social media, but I check on them often enough. Plus, I use my phone to take pictures.

One time, I almost missed a flight because I thought I left my phone in the car. I ran all the way back to the parking lot. When I arrived at the car, I peeked inside and instantly remembered plugging it in at home to charge it the night before. Oopsy. While racing to the wrong end of the terminal (by accident), it occurred to me how I had risked my flight for my phone! It felt weird to be without it all weekend.

Thing is, phones take up the slack of downtime so we’re never bored. Other than when our heads hit the pillow, that state of mind is practically a thing of the past. We are always plugged in, overstimulated, or interacting with someone.

We’re addicted to the endorphin rush too. Think about it. You post a photo. Someone likes it. Wow. You check back in a few minutes and few more have liked it. Yes. That’s a good feeling. Same thing with posts, comments, just about any interacting on social media.

Many people are becoming addicted to cell phones and video games. The stress is making them sick.

Our monkey brains need time to process what happens, to problem solve and to create.

So, when am I bored? While walking my dog on a familiar route, taking a shower, cleaning, and doing laundry. Anytime I’m doing mindless repetitive tasks.

Now tell me when you have your brilliant ideas? Do they hit you upside your head while you’re on a conference call, scrolling through Instagram, or playing a video game? No. Because your brain is active. Get where I’m going with this?

How Manoush discovered the link between creativity and boredom.

Manoush had a hectic life as a journalist. She took time off when she had a baby and became really bored. While she pushed her stroller several miles a day through New York City, her creativity exploded. She came up with a great idea for a podcast.

As soon as she changed gears and started to set everything into motion, coordinating, preparing, and researching, the ideas vanished. Poof! She went into panic mode since she had to come up with new show ideas. That’s when Manoush discovered creativity and boredom were related. The book includes a ton of research to back it up.

Being bored is the best environment for creativity.

That was a mind-blown moment for me.

I thought back on when my ideas bubble up. While driving to the grocery store, cleaning my kitchen, before sleeping at night. The best ideas would come from nowhere when I wasn’t trying to solve a problem.

I’m always trying to fill time by being productive. Now that I know spacing out is a good thing, I try to take time to do nothing. What a concept.

My son, Kelly, tells me that all the time. He took a creativity class at Icon Collective which covered the importance of doing nothing. It feels counterproductive, but it works!

Let yourself be bored. Sit and space out for a while. Can’t sit still? Do repetitive tasks that don’t require your brain to do any heavy lifting. Let go of constructive thinking.

Let your creative mind wander. You never know where boredom might lead you!

Sit on a park bench. Chill out. Europeans have this part down. 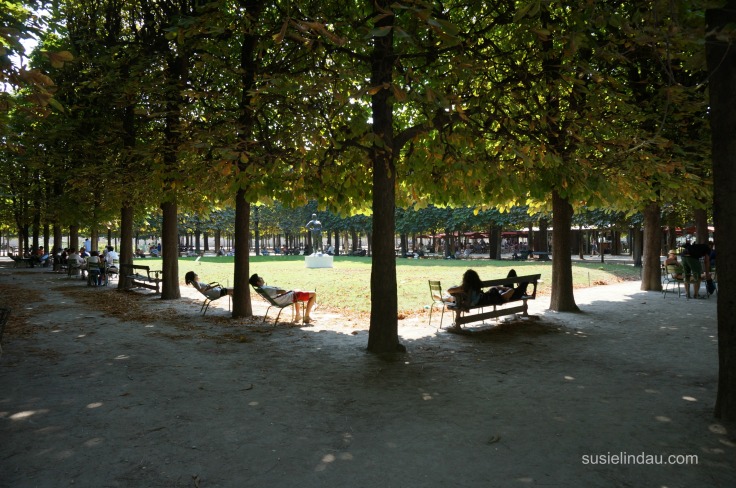 Cell phones are very handy for all kinds of obvious reasons but at a cost. Studies show, even if your phone is face down on a table, it has a negative effect. Its sheer presence is enough to hinder conversation. We must subliminally know that we will be interrupted at some point.

Want to know where your time is being spent on your iPhone? Go to Settings. Click on Battery. Scroll down and take a gander.

Many writers walk. Chuck Dickens was known for long ones. Part of the reason was to meet with some of the downtrodden who became the heart of his books. The other part probably to let his brilliant brain percolate.

I met RL Stein who said that he walks his dog every afternoon. I wonder if he gets new ideas for creepy tales from his familiar route.

Now when I’m in the car, or doing laundry, or walking Roxy, I don’t think with purpose. I don’t focus on a particular scene for revision nor do I try to pick apart any other problems. I just let my brain buzz around and do its thing.

Did you know about the link between boredom and creativity? Do you take time to space out and let your mind wander?

How to Be Creative in a World Full of Sellouts

Stop Negative Thoughts and Be Creative! 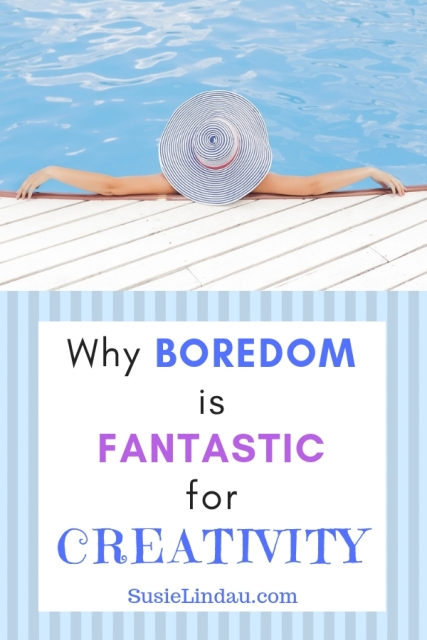 92 thoughts on “Why Being Bored is Best for Creativity”