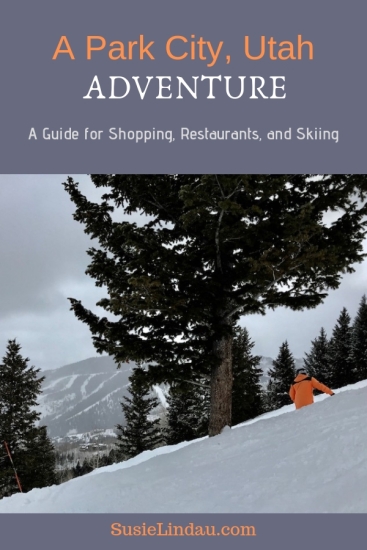 Every March, we take a family vacation. We all have Epic Passes so we pick one of their ski resorts. This year, we chose Park City Ski Resort in Utah. Being a new area to explore, I stick to two rules. The first one? Never ski alone in the trees. I’ve ended up on ledges while looking down cliffs as the snow shuffled out from under my skis’ edges and then tumbled down the headwall. Even though I had to gather up my courage to ski out of aforementioned ledge, I like someone else to be there, just in case. The other rule? Always ski inbounds. It’s easy to get turned around while skiing in trees with your friends, but there are usually markers and ropes to indicate the boundary. I don’t have any rules when it comes to riding in cars, trucks, or planes with strangers.

I vacationed in Utah years ago and remember going through coffee withdrawal. The waiters would give me the hairy eyeball then serve me Nescafe. Yep. Instant. Ewww! 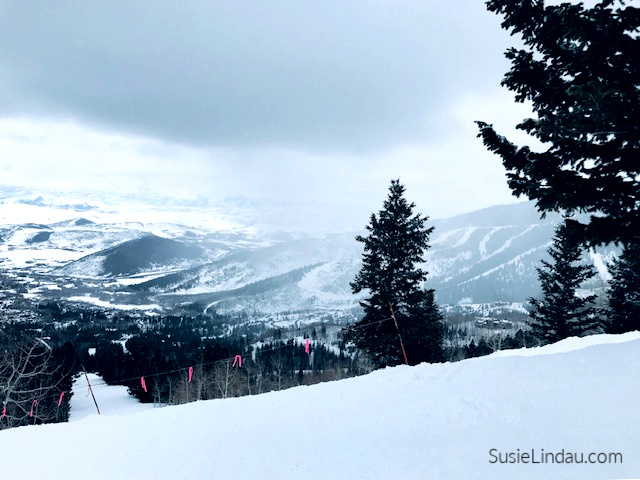 Since it was only a seven hour drive from Niwot, Colorado, (12 miles north of Boulder) we drove to Robert Redford Country. Okay, so I kept my eyes open, but missed him. Next time! This is the home of the Sundance Film Festival held at the end of January. I hope someday I’ll have a film that premiers there. Hey, a girl can dream.

When you see those blue Chain Up signs, you know you’re getting close. Keep in mind that gas stations are few and far between.

We enjoyed skiing and snowboarding at the largest ski area in the United States, according to a man from Florida who informed me on the chairlift. I met lots of friendly people from all over the world. The first day, we ended up on the far side of the mountain. When we realized our mistake, Danny said, “We’ll have to take the bus.”

“I can drive you,” said a young snowboarder.

“Cool,” I said and we followed him to his truck. We beat everyone home!

The views were breathtaking. The ski conditions started off icy. Sunshine baked the slopes by day then froze them at night.

The clouds rolled in later in the week so it stayed warmer at night. The ski conditions greatly improved. The snow became soft so I played in the moguls. Shhh! Don’t tell my orthopedic surgeon….

With the better snow conditions, the gang headed for the double black diamonds. I was skiing full out after having a pinched meniscus and didn’t want another setback so I skied by myself.

I took the chairlift up to the top of a mountain where there were a few single blacks and chose one arbitrarily. As I skied down, I realized I was on the top of a narrow ridge. I peered down cliffs on either side. It was a mogul run so I stayed in the center so I wouldn’t accidentally get thrown off the top. When I made it back down safely, I rode the chairlift and met a young guy who suggested the run underneath. I followed him as he disappeared into the trees and then stopped to survey the forest below. Oopsy. There was no going back. I found myself in a grove of aspens. Remembering what I learned while heli-skiing, I focused on the snow and tried to ignore the immobile trees. Once I made it down, I realized I’d broken one of my biggest rules!

During the week, I noticed several little monsters lurking on the slopes. They appeared harmless although their names were a bit menacing. And their teeth!

Until I found them in a gift shop. They were super aggressive! I learned they’re called Snow Bugs, created by Fred Conlon.

The day we shopped until we dropped into chairs at one of the fabulous restaurants, we continued our walk UP the street downtown, or is it uptown? Depends on which way you’re walking. It’s built on a steep hill. Anyway, we found many boutiques to peruse. Some were upscale like Gorsuch.

Don’t you think Courtney should buy that coat? I do! They had a midnight madness sale so we returned with crossed fingers after dinner. It wasn’t on sale. Dang. 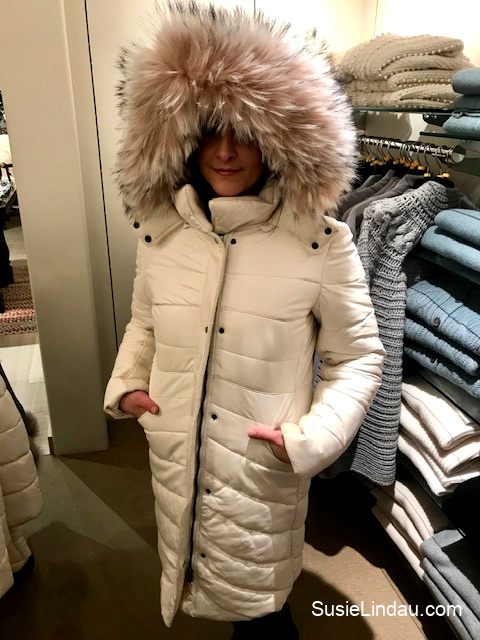 “I followed him because it was Dad.” As Kelly looked around Deer Valley, the skiers glared at his snowboard.

“Hey, Kelly, we better get out of here,” Danny said.

They had only skied a small part but were glad not to get their passes pulled. They nervously giggled afterward.

Check out the first photo to see the Deer Valley Ski Resort temptation.

For being the largest ski area around, the town seemed dinky to me, concentrated, and like I mentioned, on a big slant. The restaurants were pricey. Most entrees were between $30-40 and went up from there. Whether the atmosphere was family, casual, or fancylike, every meal was delicious. And the DESERTS!! YUM. 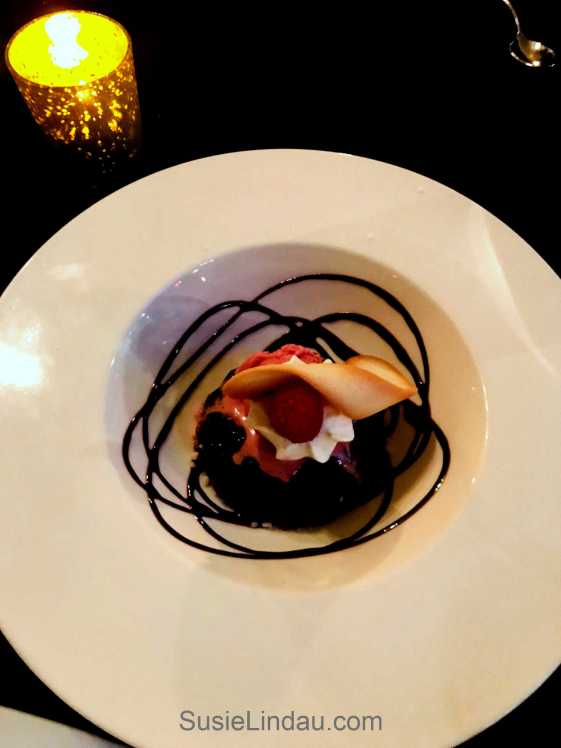 I was amazed that our Airbnb provided coffee and there was a great selection at the grocery store. Times have changed. There was also a Starbucks in town. Wow. Funny thing though. I ordered decaf coffee after dinner several times but was informed they only had regular. I finally sipped a strong cuppa joe at Buona Vita, a very reasonable and wonderful Italian restaurant.

I loved that the shops stayed open at night too. Nothing like a little hike after eating. Many of the ski shops had started spring sales. We all found something to take home.

Leksy and Courtney are arm in arm walking back down the street.

We stayed from March 16 – 24 and it was wild over St. Patty’s Day, but I think we missed the big spring break rush. There was nary a liftline during the week.

Looking uphill, the city comes to life with lights at night.

It was a great week. I wasn’t ready for it to end. Leksy and Kelly headed back to Los Angeles. Courtney’s boyfriend, Dan (He has a friend named Dan. When we get together with them, I call them Danny and the Dans. LOL!) flew back to Denver early. Courtney rode back with us.

Will I return to Park City, Utah? If, I mean, when my film is screened. Positive thinking, right?

Have you been to Park City? Do you go on family trips? Are you a Robert Redford fan?

30 thoughts on “Breaking the Rules in Park City”