When I traveled to the French Quarter in New Orleans, I was struck by its beauty, culture and history. It had a happy, fun, and funky vibe. The people were super friendly. Best of all it didn’t take long to get a good taste of it. Bad pun, but true! Tourists are attracted to this amazing place since there are so many fun things to do. Between amazing French creole dishes and desserts, Bourbon Street, antiques, shops, tours, French Street, parks, concerts, and museums, we found plenty to do.

I find it fun to find out the history of a place and the French Quarter is filled with funky facts.

For at least 10,000 years the French Quarter was inhabited by the Choctaw along with other Native Americans. They constructed a waterway (where Conti Street is located now) to connect Lake Pontchartrain to the Mississippi River for trade and transport. Gives you an idea of how wet it was, right? Half of The French Quarter is one foot above sea level. The other? Below.

Then in 1718, Jean Baptiste Le Moyne de Bienville had a brilliant idea to settle a town near the Mississippi. He founded and named the land for the Duke of Orleans (love that guy). Desiring a view of the river, he and a large crew cleared the area of cypress trees and sugar cane and drained the swamp, then constructed log cabins along the waterfront. Yep. They were flooded by the mighty waterway.

He wouldn’t give up. In 1719, Bienville sat down with French engineers and came up with a site plan for a six by nine block city, the first plan of its kind in the country. He razed any cabins that didn’t conform, but a hurricane in 1721 did most of the work for him. LOL!

Surrounded on three sides by alligator infested swamps, (Yikes!) they constructed a levee to protect them from flooding and built homes in the French colonial style; the main floor, eight feet above the ground, just in case. The Ursuline Convent (shown below with the spooky shadow) is one of the buildings that survived.

The French had to payoff a war debt to Spain, so they took control of New Orleans from 1763 to 1803. You can see Spanish influence in the architecture today.

Bienville thought he had all his ducks floating on the Mississippi in a row and his growing city was protected against all of Mother Nature’s threats. BUT in 1788, a fire broke out. In our walking tour, the guide told us, the priest wouldn’t ring the bell in the Catholic Church to warn the New Orlean citizens since it wasn’t Sunday. By now, there were over 6000 people living in the French Quarter. Around 850 structures burned to the ground, leveling close to the entire city.

Did they learn anything? Pshh. No.

They reconstructed the city in those same flammable buildings and the town burned down again in 1794! Spain finally enacted building codes requiring the use of brick, tile, and slate.

The other mistake was realized later. They weren’t able to anchor homes to bedrock when constructing the city since it is built on sopping wet peat. Parts of New Orleans are sinking over an inch a year. According to this article, as organic material dries out after drastic runoff, it breaks down and air pockets compress. While trying to control the amount of water pumped from the city, they try to maintain a high level of water on the surface. Between the threat of the Mississippi and Hurricanes, it’s an on-going problem.

14 fun things to do in the French Quarter:

Where to stay in New Orleans

Make sure to stay in the French Quarter. My husband, Danny and I were able to walk, bike, or trolley everywhere from our location. Ours was a time-share trade, but there are plenty of airbnbs and hotels in the area.

There is a ton of information on restaurants in the French Quarter, so I’m only going to mention a few highlights.

When I’m on vacation, I look forward to eating at restaurants. Most of us would have high expectations going to a foodie city like this. My husband, Danny, and I weren’t disappointed.  When we first arrived, we dropped off our stuff and headed out to The Palace Cafe. We enjoyed an amazing dinner while being serenaded. A great introduction and welcome to dining in the French Quarter.

You really can’t go wrong with any restaurants in the French Quarter. Most serve traditional creole and it’s all good!

Make sure to stop by Café Du Monde for beignets. They are light, sugary heavenly mouthfuls. Wash a few down with chicory coffee. Delish!  Don’t worry about setting aside time to stop by. It’s open 24 hours a day! 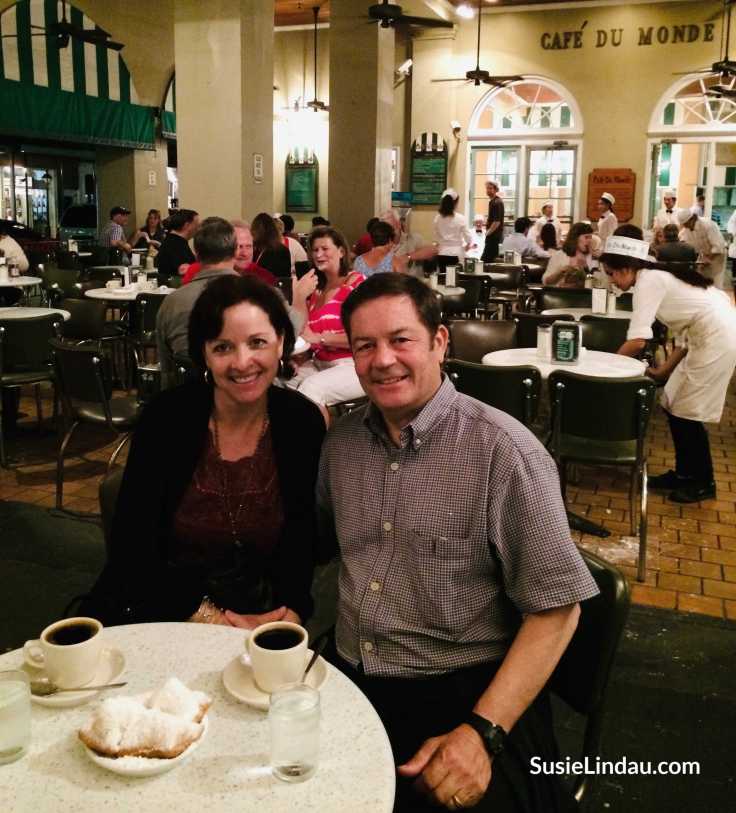 We made a reservation at Cane and Table and enjoyed the dinner and ambiance.

When on vacation, I try everything! I would recommend stopping by Johnny Po Boys. It’s a super casual restaurant with the classic red checked tablecloths. It’s a sandwich you’ll remember!

Bourbon Street has become famous because of Mardi Gras and Halloween, but it is WILD every night of the week. The first night, we wandered from bar to bar and danced while meeting lots of people who carried very strange drinks. Yep. Those are fishbowls. 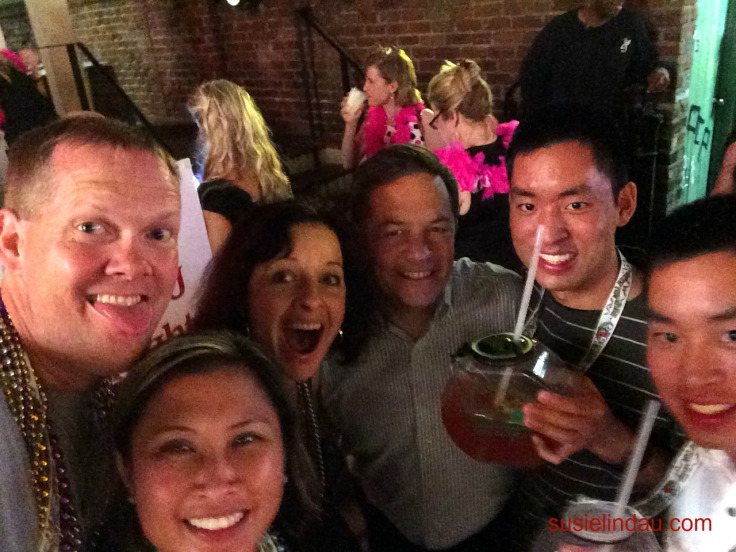 It’s easy to get swept up in the melée. I didn’t even drink and ended up doing a Michael Jackson impersonation, on stage. LOL!

Go on a Ghost Tour

I love to go on ghost tours while on vacation since you get the inside skinny on the city’s colorful characters while learning about the area. From voodoo to witches to multitudes of ghosts, the French Quarter takes characters to a whole new level. 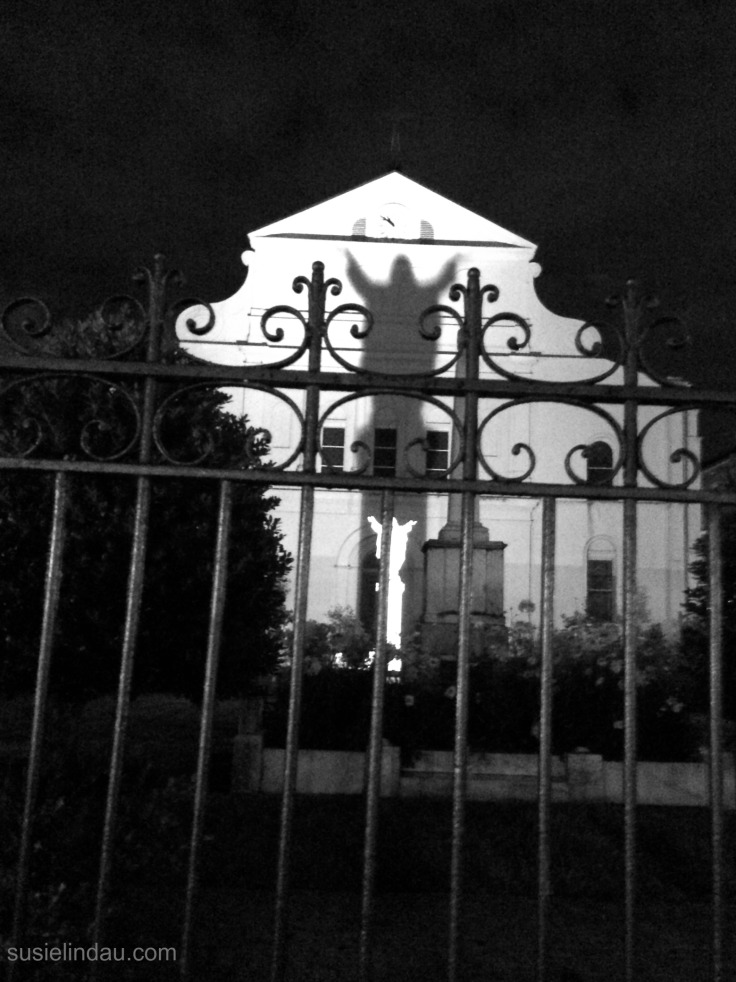 Go on a historical walking tour

We signed up for a walking tour and learned so much about the history of the French Quarter. From fires to floods to voodoo to politicians and famous ladies, along with historical French influences from the Duke of Orlean, why the city is sinking and mistakes made during a fire that burned almost everything in the Quarter, it’s very entertaining and well-worth the time.

Check out the famous cemeteries

Since we walked everywhere, we visited the crypts at the Lafayette Cemetery Number 1, which is the oldest in New Orleans.  We really enjoyed seeing the beautiful homes along the way. The cemetery was as creepy as I had hoped. Okay, so it wasn’t this creepy. I had a little fun with editing. LOL! Saint Louis Cemetery is located to the north of the French Quarter and is a lot closer.

Without the unnecessary edits. LOL! 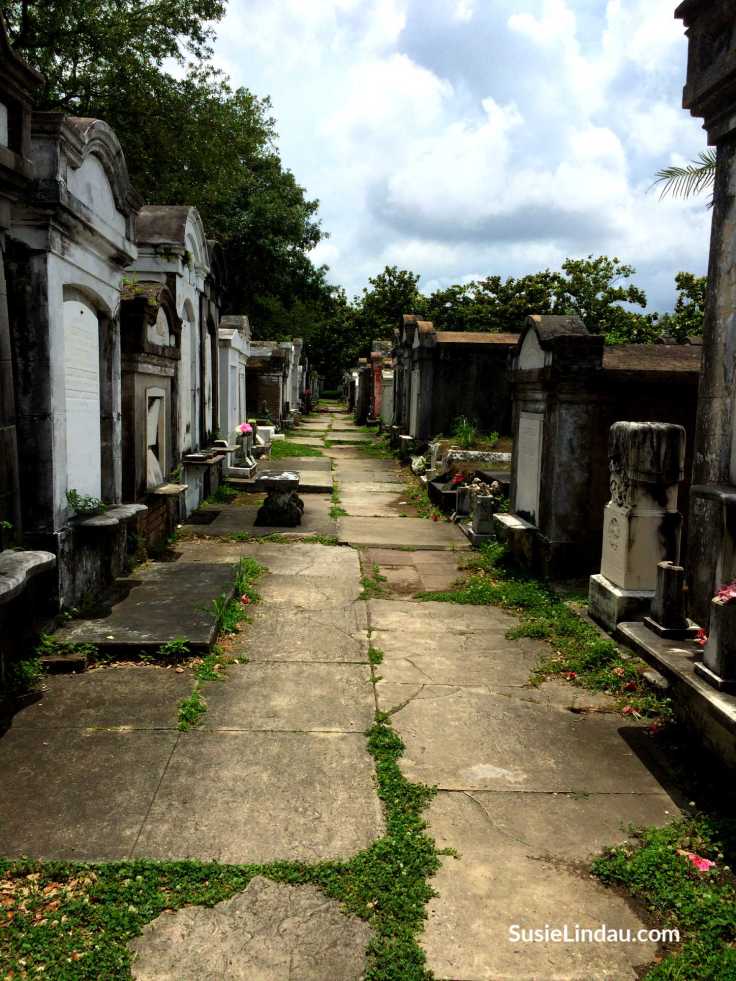 After your stroll to the cemetery, take a detour through the Garden District. If you love beautiful homes and gardens, you’ll be happy you did! 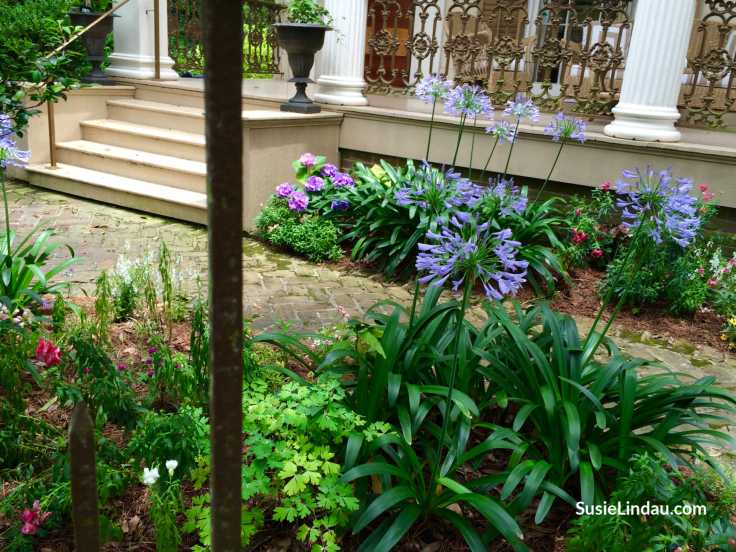 One day we rented bikes and road to the City Park. There were lots of places to ride. The sculptures were amazing near the New Orleans Museum of Art.

So were the paintings. It was a lovely museum filled with a wide variety of art. I really enjoyed this one by Bouguereaux. She looks like Scarlet Johansson, don’t you think? 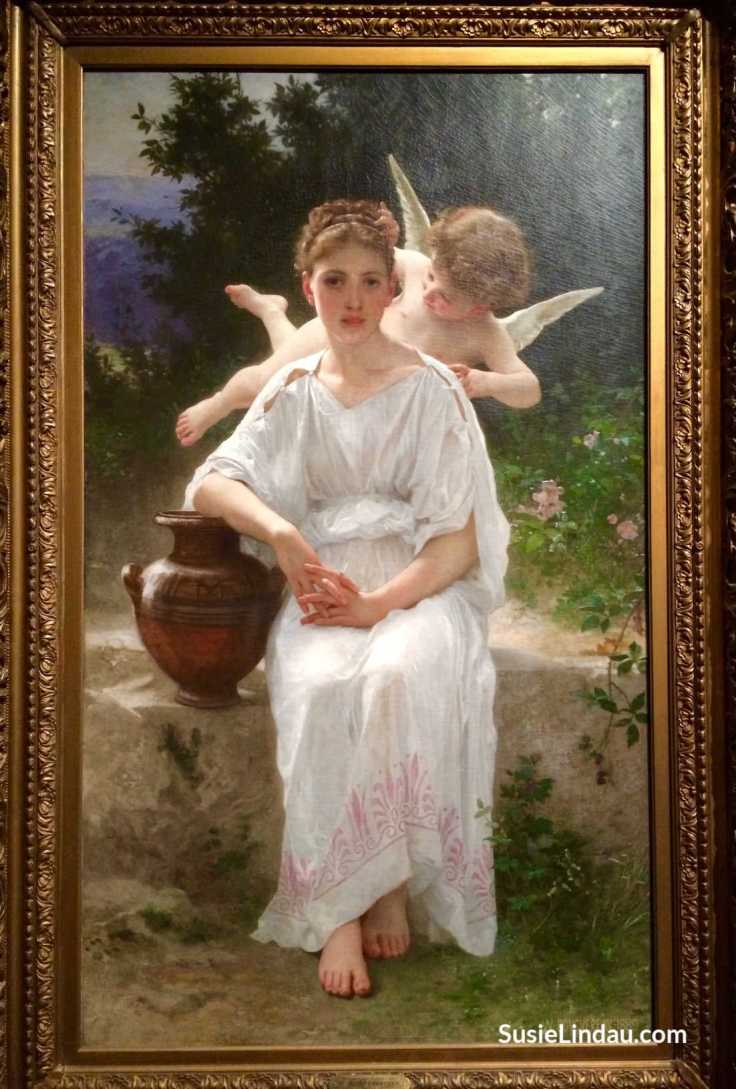 Take in a concert

Check out the events calendar to see what’s happening. When we arrived, we walked to the Oyster Festival at Woldenberg Park. I learned what I should wear next time 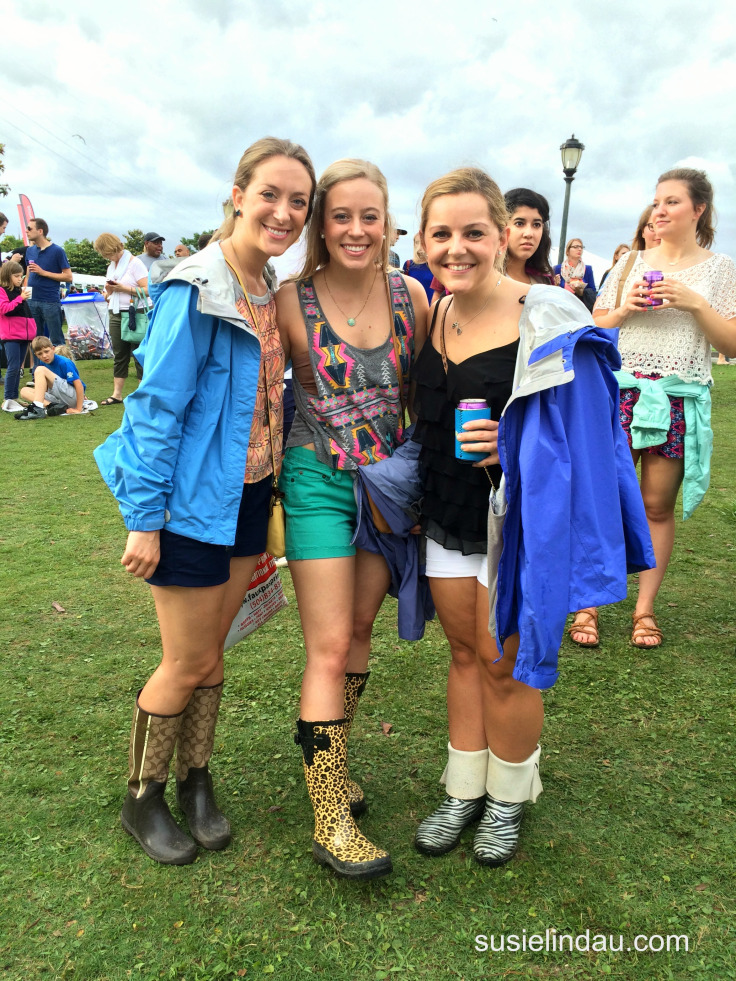 There are shops of every variety in the French Quarter. Head to Decatur Street for funky the House of Voodoo shop selling alligator heads, herbs for potions, (for real!) and voodoo dolls (really creepy) to cute boutiques, gift shops, and home decor.

MS Rau Antiques on Royal Street is like a museum! It’s easily one of the finest antique shops I’ve ever visited.

Colonnade Market is a must see in the French Market District. With a wide variety of vendors you’ll be sure to find something to take home. I bought a small leather backpack.

Beautiful Jackson Square has it’s own vibe. You’ll find lots of great shops and eateries. But I loved the barkers, street performers and fortune tellers. When you’re in New Orleans you’re in the land of woowoo and voodoo. I always go with the flow!

I sat down with a tarot card reader who wore a funky hat. You know how I love hats. As she flipped the cards and interpreted them, she kept bringing up business, selling, and volunteering. Danny must have some pretty strong energy!

Walk to the Muddy Mississippi

See for yourself how the French Quarter is sinking. You will also understand why it got the moniker, Mighty or Muddy Mississippi. Yep. The turbulent river is brown.

I hope you enjoyed the virtual tour of New Orleans! Now that I’ve drooled over my photos, I can’t wait to go back! I wonder how hard it is to make beignets…

What’s your favorite thing to do while traveling? Is New Orleans on your travel bucket list?

Subscribe to keep up with travel, inspiration, and Wild Side podcast updates!

Here’s a map to help orient you-

Pin this for later! 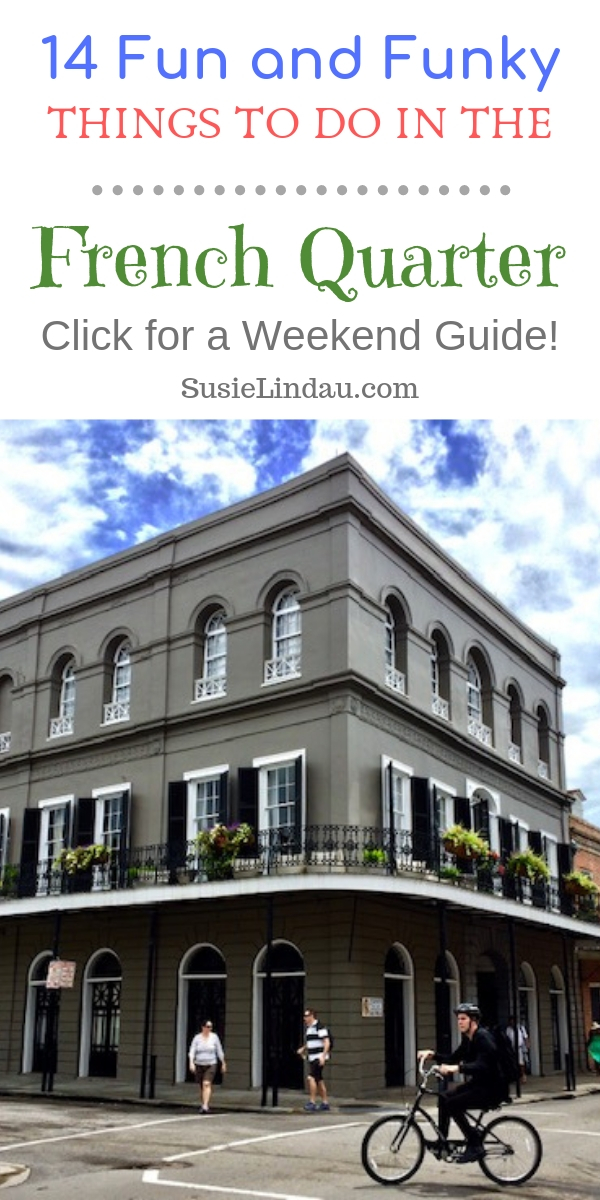 55 thoughts on “Funky History of The French Quarter and 14 Fun Things to Do!”