I planned to try AT-skis (all-terrain) and backcountry ski to Francie’s Cabin, four miles from Breckenridge, Colorado. It’s one of the 10th Mountain Division huts. It would be a winter backpacking adventure in a snowstorm!

Then I broke my big toe. I didn’t break it by heli-skiing, polar plunging, or backpacking in the wilderness. Nope. I smashed it with a sofa. How would I ski uphill, shlep a backpack for an overnight, while managing snow conditions?

I would soon find out.

Some of my worry dissipated when I ran into a friend who wore a boot for a broken second metatarsal on top of her foot. Wasn’t a ski boot pretty much the same? Flat sole, stiff upper, no give.

I kept my boot loose on Saturday and took a few runs. Other than some sketchy turns, it seemed okay.

I went to Mountain Outfitters to try on my rental gear and struggled to slip on my right boot. The L shape didn’t give and neither did my toe. It was like labor for about three full seconds from an extremity.  The boot finally fit with a super-thin sock. I rented the setup. The salesman, who resembled a handsome, mountain man-like Dean Cain, said, “Good luck.”

I asked what time they opened, just in case.

Courtney, me, Lisa and Michael. Danny took the photo.

Packed up and ready to go, I sat down to stuff my sore foot into the unyielding boot.

Oh, my God. Weren’t our feet supposed to swell later in the day? After a few attempts, I slumped back on the bench. “I can’t go. I can’t bend my toe to put my boot on.”

My friend, Lisa said, “I grew up in a family of eight kids. Ski boots were lined up in a row. If you were the last one to grab a pair, they were probably too small, so my mom kept a box of bread bags nearby. We would poke a small hole in the bottom of the bag and stuff our foot inside. Then it would slip right into the boot.”

“It’s worth a try.” I grabbed a grocery bag that already resembled a sieve, slid my big toe into one corner, and tried one more time. It slipped right in. Miraculous!

After a big sigh of relief, I pulled the torn bag out of my boot. These boots wouldn’t come off until I gave up, or arrived at Francie’s Cabin.

That was the first adventure.

We had awoken to a snowstorm. The snow still fell in large flakes at almost an inch an hour. Over a foot of snow lay on the road. Although our driveway had been plowed, several more inches had fallen and the street plow had left a pile of snow. Everyone, except for me, (ski boots, remember?) pitched in to shovel. We were on our way.

I wondered how my Highlander Hybrid would handle the uphill drive to the parking lot at the trailhead. Danny drove down from Baldy Mountain to town and headed south on Highway 9. The roads were slippery even though my car has studded snow tires.

After turning on Spruce Creek Drive, we made our way past the small neighborhood on a single lane made by a few brave drivers.  Then a car approached us head-on. We wouldn’t be able to pass him. He waved us backward. “You can’t drive up there. Cars are in the ditch.”

Ha! I didn’t believe him. I’m from Wisconsin. Besides, we had nothing else to do if we got stuck. We all carried shovels in our backpacks.

Our friends drove in a truck behind us as we rolled back down to an intersection to let the car of doom pass by in retreat. We let Michael lead the way with his truck. It was possible that my car chassis could get hung up on the snow.

Some dude with a plow in front of his truck had slid off the road. His friend was trying like an idiot to pull him out perpendicular to his. That never works. Michael had made it past him. The idiot started to back up and the tow straps blocked the road. He had his window rolled down to direct his friend.

I rolled down my window and shouted, “Stop! We need to keep up our momentum.”

The guy rolled his eyes and rolled forward to let us drive over the straps.

By the way, the only way to pull your car out of the snow when it’s stuck is with the wheels straight ahead.

As we wended our way a couple of miles uphill, the snow depth rose. Soon it was to the wheel wells. I searched ahead for parked cars. “Another half-mile,” my daughter Courtney said after consulting her app.

A few minutes later, I spotted snow-covered cars. I was so relieved.

We unloaded our backpacks full of water, food, dry clothes, a sleeping bag, and everything else we would need in the cabin. Then we turned on our avalanche beacons.

With a little help from Courtney, I stepped into the funky bindings. The skis were set for uphill. Velvet straps covered the bottom of the skis. Would my toe hit the top of my boot? Would it be too sore to ski? Are you sick of hearing about my toe? I am. 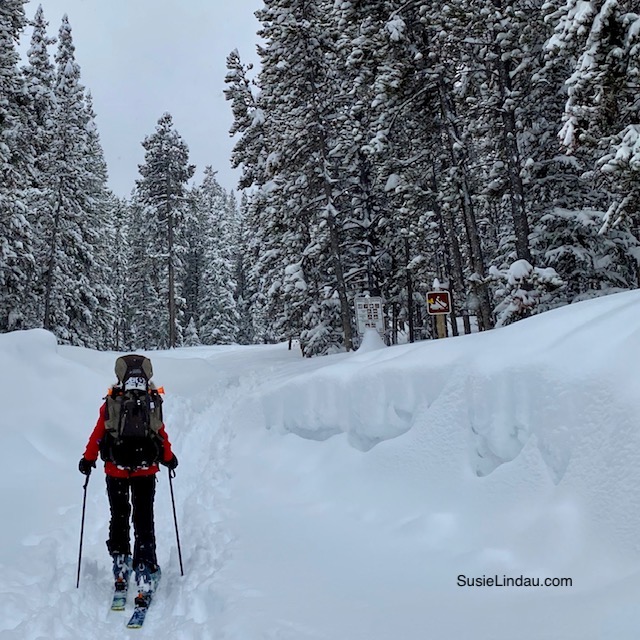 The boot was only attached in the front of the binding for uphill climbs and acted like a hinge for walking. I slid up over the little hill from the parking lot and started up the trail to Francie’s Cabin.

My toe was fine. I’m sure you were holding your breath. LOL!

The flip-down stilettos, coined by one of Courtney’s friends came in handy. As the mountain became steeper, I flipped down the metal lift under my heels to keep my body upright. Cool.

It was around twenty degrees but didn’t take long before my glasses steamed up. I slipped off my hood. Then I unzipped my jacket. In another half hour, I took off my mittens. What a workout!

I made the mistake of skiing too fast and had to stop to catch my breath. Overheating added to the strain. After I cooled down a little, I was fine but continued at a slower pace.

Courtney is AT snowboarding on a split board which becomes skis. Brilliant! 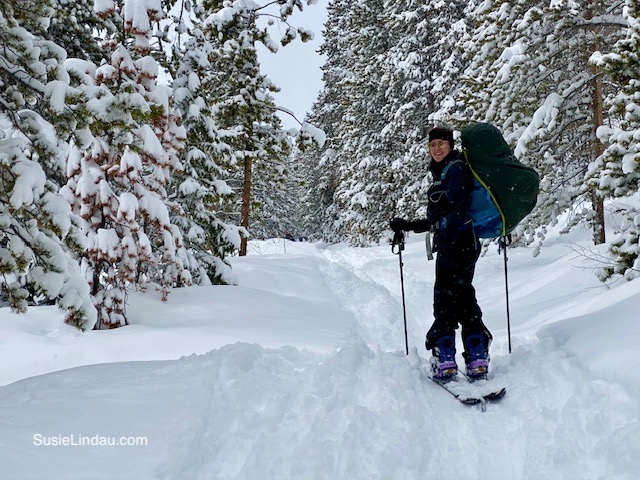 It always seems like it takes a long time to travel to a new place. Carrying a backpack while skiing added to the awkwardness. I stopped to tighten my boots and make carrying the load more stable.

What would take a half-hour in the summer took us more than ninety minutes.

When the forest opened up and we came to a sharp turn, I knew we were close. Sure enough. The roof of the cabin peeked out from the top of the hill and the trees around it. Yay!

I couldn’t get my skis off fast enough. So much snow had fallen, I worried about my poles being buried by snow.

The cabin was fabulous. Francie’s Cabin was built in 1995 in honor of Francie Lockwood Bailey who died tragically at thirty-five years old in a plane crash. The cabin is part of the 10th Mountain Division’s system of thirty-four huts built in central Colorado.

About the 10th Mountain Division:

During WWII, the Russians attacked Finland but were taken by surprise when the Fins were able to navigate the treacherous countryside on skis. When the head of the United States Ski Patrol, Charles Minot Dole, heard about the unusual army, he presented this idea to the War Department. In 1940, with the threat of a German invasion looming, they allotted funds for a mountain division trained to fight on rough terrain. The 10th Mountain Division fought in the mountains of Italy and Austria. There’s a whole lot more about their history here.

Today, backcountry visitors can sign up to stay in a hut. A lottery is held for some of them. Francie’s Cabin is the most popular, according to the hut master. I would love to return and hike to it in much easier conditions during summer.

While I rested, the gang headed out for a quick climb and a downhill run.

There were fourteen of us in the hut that slept twenty. I enjoyed some quiet time. 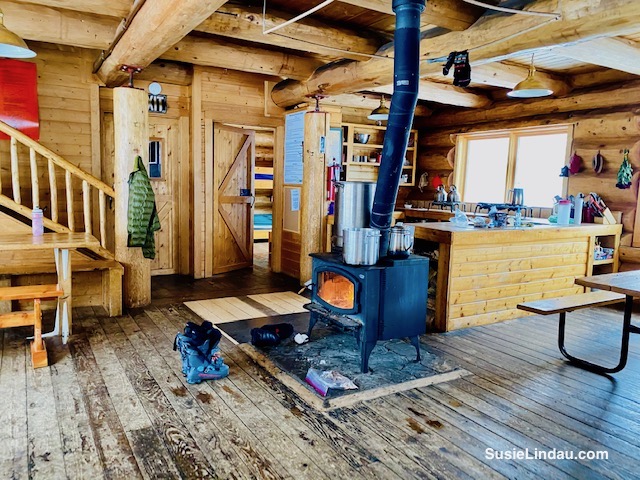 The window seat was as comfy as it looked. 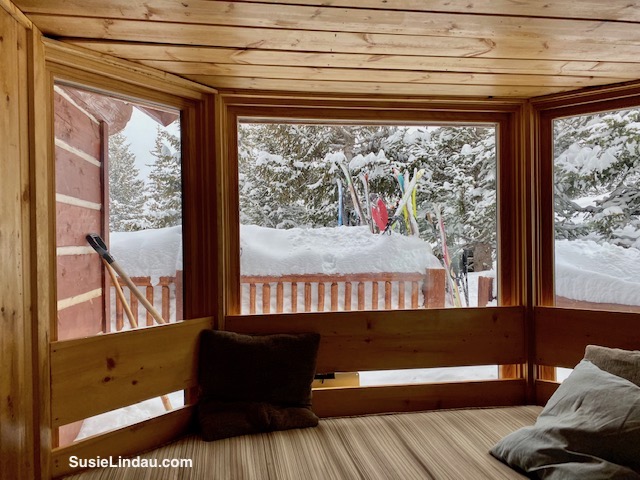 When everyone returned, we snacked and melted snow for water. Ten inches of snow = one inch of water. It took a lot of time to melt enough to fill a pot. Who knew?

See all the straps overhead drying? 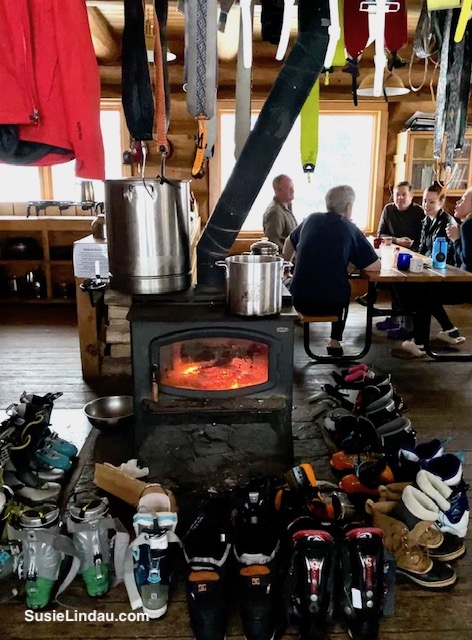 There were five groups of backcountry skiers, so we took turns cooking and eating. The wood stove kept the cabin warm and cozy.

Then, we played cards.

It was pretty amazing to have overhead lights generated by a solar panel. We also had the cleanest indoor pit toilets. Adding sawdust made them compostable.

It snowed all night. We had planned to AT-ski to a peak where we would ski a run, but the hut master stopped by and told us that we should head down. It snowed three feet in the last twenty-four hours!

We made bacon, egg, and cheese bagels, and enjoyed our instant coffee. It tastes surprisingly good when I “camp.” There was a constant need for water. Danny is filling the pot with snow while Courtney looks on. 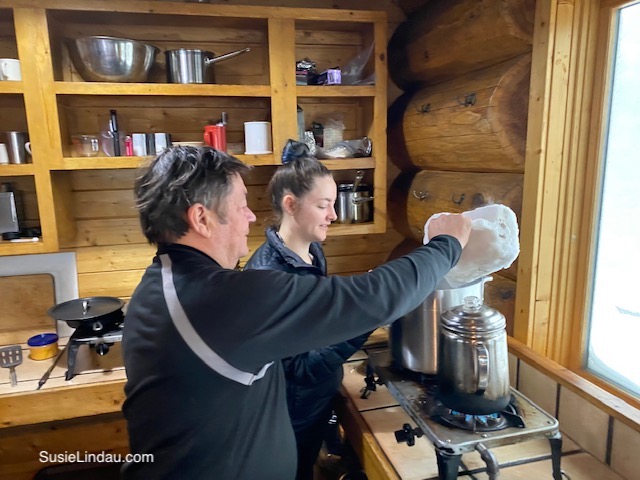 We took one last wild photo. Our friend Andrew joined in the fun.

and headed into the snow.

I thought the way back down would be easy, but with all the snow, we couldn’t make any turns. The first time I tried, I submarined. That means my skis went under the snow and I came to an abrupt stop. I had to snowplow, which is just like it sounds. I felt the burn!

That’s Courtney in the shot below, snowboarding back down. She said she enjoyed having poles in the deep powder.

It was slow going at first even though we skied downhill.

That said, it was faster skiing downhill.

We took a couple of breaks… 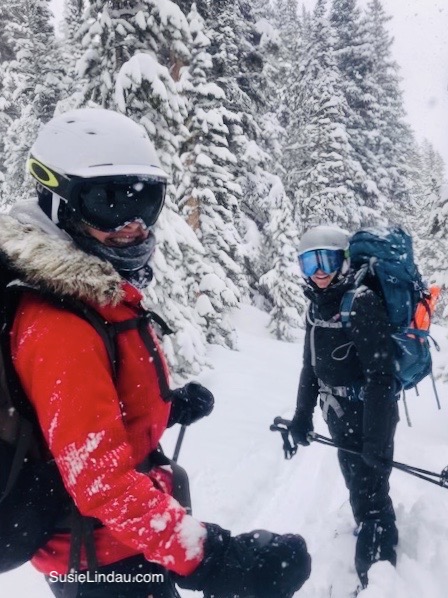 We made it to the parking lot, at last!

We dug out the truck and my car and slid down the road to Breckenridge. Would I all-terrain ski again? Sure! And next time I move a couch, I will wear steel-toed boots.

28 thoughts on “A Backcountry Ski and Hut Adventure in Breckenridge, Colorado”