My friend, Owl, chilled out in front of the window last Sunday. Was he a sign or an omen?

Then, my family headed to Union Reservoir to paddleboard. Little did I know it would become a misadventure in oh, my God, scariness. Life vests are mandatory, and social distancing is a must, but even when taking precautions, life happens.

It started off as a beautiful day, but by the time we arrived at the reservoir, the clouds had gathered in the west and became dark and ominous. I used my mad skills to keep the rain from dousing our plans to paddle on the large lake. Wink. Wink.

The water was warm and welcoming. We let the wind do most of the work as we paddled into the middle of the lake. The storm headed to the east and was quickly forgotten.

I took photos through a protective plastic sleeve but they turned out pretty well, considering.

It was cloudy but warm. A perfect day for paddleboarding in Boulder, County. Or so I thought.

Then the wind picked up and the water became choppy. After years of experience on the water in canoes in Wisconsin, I knew that we needed to head back. It could take a while.

Compared to the large Costco boards of my family, my little skiff, constructed for river paddleboarding, soon lapped in the waves as I drove my paddle into the water to make progress. Any progress. My muscles strained with the effort. The waves soon became white caps.

None of these pictures were taken during the squall. I was too busy paddling! 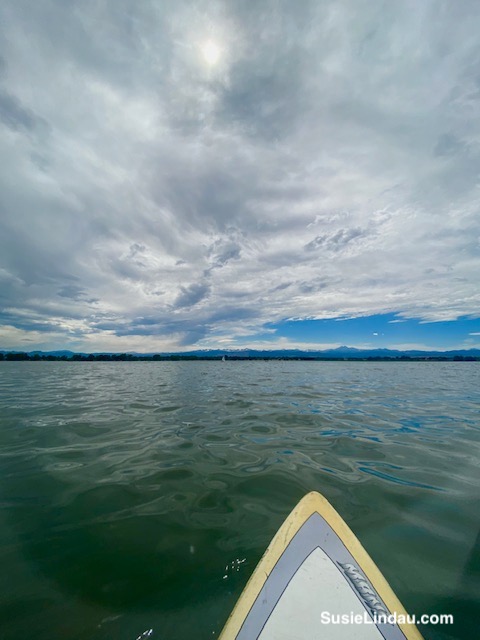 When I made it to the nearest buoy, I turned around to check on my family. Danny and Dan were heading west while my daughter, Courtney struggled to make any headway with her sixty-pound dog, Lady, at the prow.

I was exhausted but headed back to help her.

By that time, Dan had paddled pretty far in a different direction, but I caught up with him and yelled, “You have to take Lady!”

Dan turned around and they met up. Lady moved to the other board and Courtney and I started once again to paddle across the lake.

This time Courtney had no problem keeping up and soon passed me. It took about a half-hour to get close enough to shore for the windbreak of trees to smooth the water. She stayed ahead of me and we stopped to rest.

Dan and Danny were nowhere to be found.

I took pictures on my phone and blew them up, but still couldn’t see them. I prayed nothing happened to them.

After another twenty minutes of panicking, Courtney waved to me. Danny was onshore. He must have skirted around us!

Once I paddled in, I thought by now Dan would be right behind. Nope.

It took him another half hour! With Lady on the front, he couldn’t keep the board straight and had to keep changing hands with his paddle. It hurt me to watch him.

Our one to two-hour excursion became four.

It was a workout, that’s for sure. We went home, grilled out, and celebrated our narrow escape.

My friend, Owl looked on as if to say, “See? You made it.” Definitely good luck.

Next time? Everyone will carry a phone.

Both strokes resemble their letter. J-stroke on the left side of the board with the small swing to the left as you finish your stroke will pull your board left and the opposite on the right side. J-strokes may slow you down.

After taking white-water canoeing at the UW, I learned the value of C-stroke. When navigating rapids, the person in the front of the canoe does all of the steering.

Cool thing about C-Stroke. You won’t have to switch sides to straighten out your board.

Since I’m righthanded, I plunge my paddle into the water about a foot or two from the prow, as far as I can extend, and pull it toward the board, then stop the stroke at my hip if I’m sitting, and at my body if I’m standing. Like drawing the letter C.

This stroke makes it possible to stroke on one side. The downside? I overuse the same muscles. I’m a spazz on my left, but I’m practicing!

Have you ever paddleboarded or gone boating? Do you like being on the water? Paddle board or Paddleboard?

51 thoughts on “A Paddleboarding Misadventure”